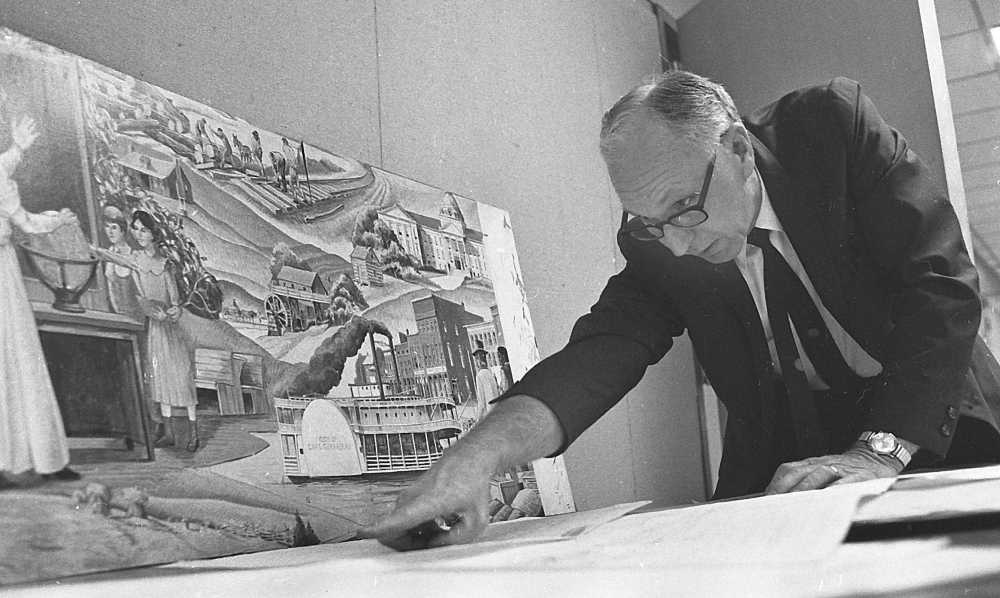 A part of the 28-by-30-foot mural showing the progress of southeast Missouri, reduced in scale, is explained by Jake Wells, member of the SEMO State University and the man who painted the mural in Kent Library, which is one of the largest in the state. Below, the work complete, Mr. Wells reflects on possible changes he might make in the mural were he to do it over. The massive piece of art took nearly three years from conception to completion. (Gordon L. McBride photos) 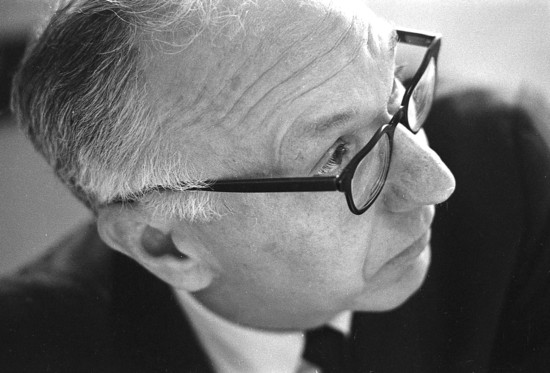 Artist 'in touch' with people

A study of Jake Wells the artist, although he disdains self-application of that term, is a quiet one, punctuated by a down-to-earth feeling for the people and things around him.

Although the Kent Library mural is proof positive of his ability to put a historical saga spanning several hundred years into a perspective understandable to those of us who have not come much closer to a river packet boat than one drydocked in a museum somewhere or who hardly know what salt-making is, much less how to make it, what lies beneath the surface color of the mural is what makes Mr. Wells tick. He is in touch with people and in touch with what it took for those people to make something out of nothing more than land, water and determination.

While working on the 800-square-foot mural, Mr. Wells had some rather extensive written contact with the famous Missouri artist, Thomas Hart Benton. "I'd have been lost if Mr. Benton hadn't been so charitable with his suggestions," he said. But asked if he'd like the artist to take a look at the finished product, Mr. Wells took a long, slow puff on his pipe and replied, "I wish he could, yet I don't know what he'd think. He might just say, 'Well, Jake, you blew the whole thing.'"

Shying away from calling himself an artist because "an artist is a person who must paint, or must sculpt." Mr. Wells admits he has "more interest in how a thing is done than the object itself. I like to figure out how to do it; I guess I'm more of a mechanic. An artist practices his craft to the extent of having an unquenchable fire. With me," he smiled, "I can frequently go fishing just as easy as paint."

Asked if he'd pick another area, rather than Missouri, for a mural subject, the Marble Hill native who said he's from a long line of timber cutters, replied that "I'm so closely tied with this part of the country, it's the only part I feel qualified to make a statement about."

Practically everything he draws or paints, Mr. Wells said, "is built on a sort of nostalgia, sometimes even romanticism."

Mr. Wells said his favorite part of the work is the salt-making. "It isn't because I have any affinity to salt makers--I just like that area; I think I painted it better." The "agriculture fellow" with a scythe represents more work than any other figure, he continued, although he admitted that now he thinks the figure "looks pretty grim."

"I've been accused of making all the people sad," he chuckled softly. "Why aren't there more people laughing, people ask me. Well, these people were faced with a pretty difficult task of making a living and trying to get along. I just couldn't visualize standing around doing a lot of grinning." Some figures are figments of his imagination and others are patterned after people he knows.

The school marm, her hair pinned back in a neat bun, "looks pretty doggone severe," the artist mused. And he laughed that a figure in rather formal dress with a bowler-style hat "looks like a used car dealer I wouldn't buy a car from." One of his favorite figures is a farm woman scattering feed for two Rhode Island Red chickens.

Working on the painting wasn't all smiles, either, he revealed. Painting the bottom four foot panels (the contemporary scenes), Mr. Wells said that was "as much physical torture as plowing a 40-acre field with a single bottom plow."

But smiles or no smiles on their faces, Mr. Wells knows his people. In fact, what he called a "deep feeling" for people was heightened in researching various periods for the mural and in actually painting it. Mr. Wells said he hopes the mural will "make the role of people" clear to the viewer. We aren't just an area," he said, "we're people from a long way back. It's the spirit of man that actually makes an area great or not so great.

"We hope the viewer will realize that an attempt to show everything frequently results in showing nothing--at least nothing that has the ability to make a lasting impression. We can only seek to give, within the framework of design and theme, a 'walk-by' look at this area, its people and its development.

The mural was dedicated Sept. 23, 1973 with a ceremony that attracted over 1,000 people. Rush H. Limbaugh Sr. was the keynote speaker. With the mural dedication, the university began a year-long observance of its 100th birthday.

Jake Wells also designed the Cape Girardeau Bicentennial Mural that measures 40 feet by 22 feet atop a building at Broadway and Fountain street. It depicts the founding of Cape Girardeau and was completed in July 1992. 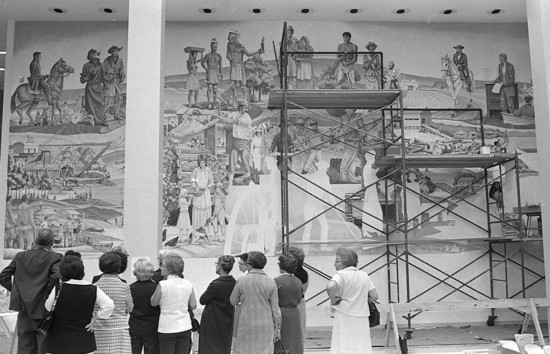 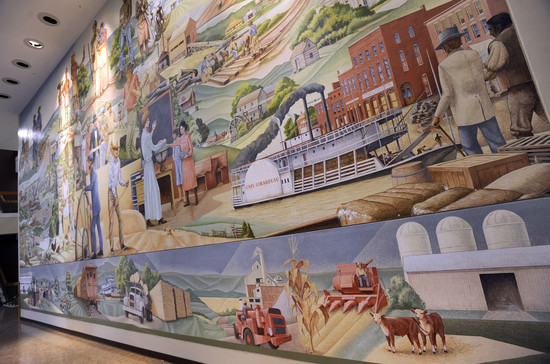