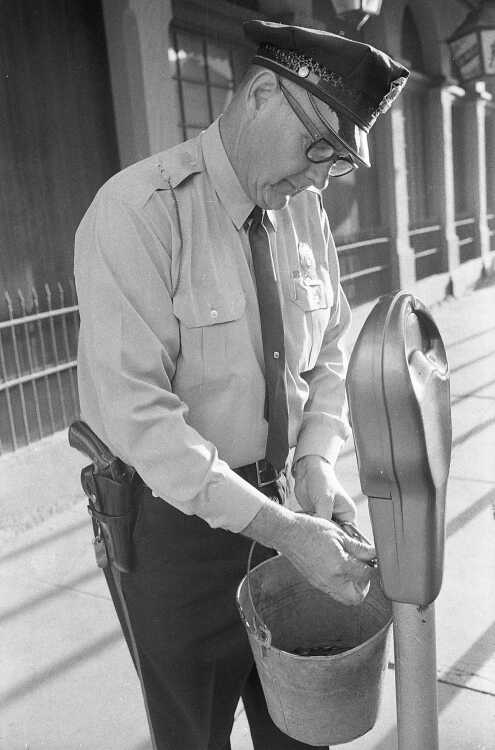 The long arm of the law is extending a helping hand to Cape Girardeau banks and businesses to aid them during the current penny shortage.

Parking meter change has turned into pennies from heaven for banks as the meters emptied by city policemen every two weeks provide the banks with one of their primary sources of the one-cent pieces.

The city's policy of dividing the pennies collected from parking meters on a 2-2-1 ratio between the three Cape Girardeau banks has aided circulation of pennies on the Cape Girardeau market and has gone a long way in helping the banks have pennies available for their business customers.

Sgt. Burl R. Statler, in charge of the city police parking meter department, said about $500 to $700 collected every two weeks in pennies from meters is sorted and counted into bags of 500 pennies and divided. First National Bank and Farmers and Merchants Bank, the two larger banks, receive two bags each and Cape State Bank one bag out of every five.

The policy of the city previously had been to deposit all of its parking meter change in one bank, but because of requests from the other banks for a share of the pennies when the shortage became more severe, the policy was changed about four months ago to include all three banks as depositories for pennies, Sgt. Statler said.

He said Farmers and Merchants Bank still receives all the nickels and dimes from the meters, since there is apparently no shortage of these coins.

Banks aren't the only ones who have expressed an interest in divving up the parking meter loot.

"Quite a few individual merchants have also asked for pennies, but we tell them they have to get them from the bank," Sgt. Statler said.

Also, about 10 to 12 years ago coin collectors would often ask to search through the pennies for valuable ones, but that practice isn't done anymore, he said.

The meters also have felt the penny shortage in that there have been fewer pennies deposited in recent weeks and a slight increase in the number of nickels and dimes placed in meters.

But there has been no significant increase in revenue from parking meters to reflect any widespread current of persons hoarding the pennies and using nickels and dimes instead.

Bankers say that the meters are one of their two primary sources for pennies, the other being the Federal Reserve Bank in St. Louis. But the supply of pennies received from the federal reserve bank is not as constant as that from the meter because it can range anywhere from nothing one week to as much as $300 another week, usually averaging about $100 to $150 a week.

The banks, in turn, have set up an allotment system whereby each of their customers can receive a certain amount of pennies each week. But pennies are allotted only for customers of the banks and are usually refused to non-customers.

John K. Hale, executive president of Cape State Bank, said if the bank has pennies and customers come in asking for the coins, the bank takes care of them daily. He said supermarket and drive-in restaurants are the biggest users of pennies, while some merchants have found no dire need for pennies.

"We limit our supply to merchants based on the amount we have," Bill L. Bowers, vice president of Farmers and Merchants Bank, said. "We try to avoid giving pennies to anyone except businesses and customers of our bank on a weekly basis."

Dennis M. Depro, assistant cashier at First National Bank, said the bigger store, especially grocery stores, are in constant need of extra pennies. He said the supply of pennies over the past three months has been constant, but with Christmas coming up more pennies than ever will be needed.

All three banks are using some type of incentive to get customers to subsidize the supply of pennies provided by parking meters and the federal reserve.

Cape State Bank has been giving a silver dollar to customers who bring in 90 pennies. Farmers and Merchants Bank and First National Bank are participating in a U.S. Treasury Department program whereby any customer who redeems $5 or more in pennies is sent a citation for their cooperation in helping solve the penny shortage.

So far, the Cape Girardeau Police Department hasn't received a citation for their aid, but their penny contributions alone would qualify them for approximately 100 government citations every two weeks.