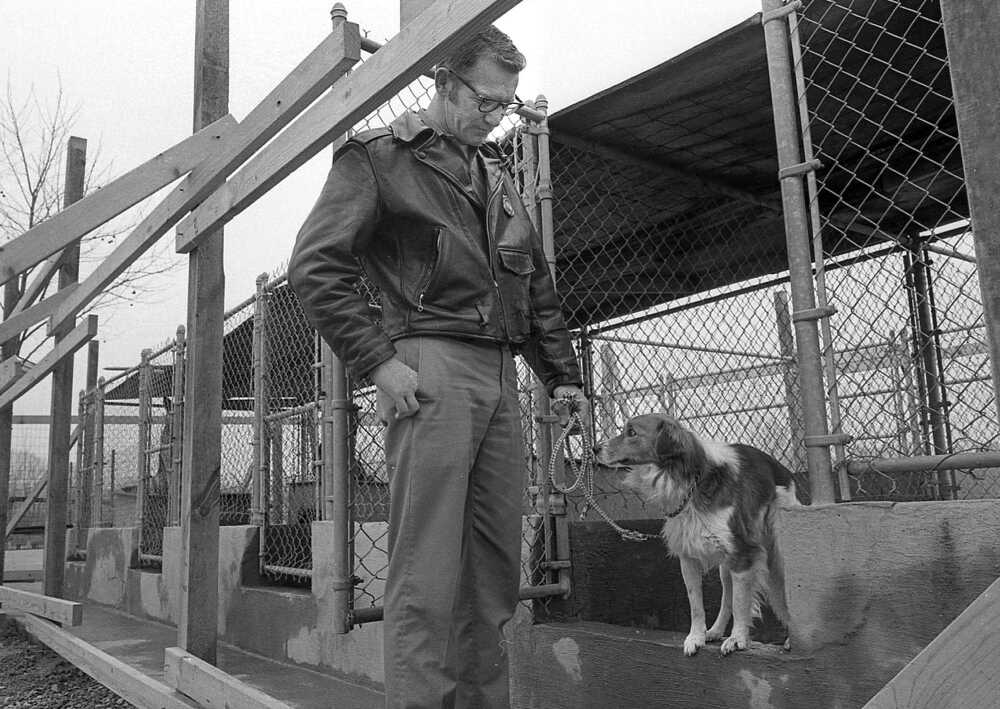 Animals impounded at the Small Animal Shelter in Arena Park will have somewhat better conditions in their temporary home. A moderate amount of renovation work is underway at the shelter, and is expected to be completed soon. Above, John Carter, shelter supervisor, checks on a young dog at the shelter. The scaffolding, at left, is where workmen are preparing to re-roof pens. The dog shown, part collie, will be available for adoption Monday along with other pups at the shelter.

Shivering puppies and dogs at the city Small Animal Shelter will soon get relief from cold winter weather.

Officials at the Cape Girardeau Police Department said that the shelter is in line for renovation work totaling $1,400. Work will be done by DAKA Construction Co. of Cape Girardeau.

John Carter, shelter supervisor, said plans call for re-roofing of the pens, construction of removable walls and repair of the drainage system.

Lt. Don Roberts of the city police department said the renovation work will be of a "minor nature," and credited it to the wishes of Lt. William Stover when he served as interim police chief during the fall.

"We had some sanitation problems out there this summer," Lt. Roberts said, "and we wanted to try to get them straightened out."

He said the decision to make repairs was made by the police department, and was not influenced by action of the Central High School Student Council, which circulated petitions earlier in the fall calling for repairs to the shelter and more humane treatment of animals kept at the shelter.

The Central pupils, led by Miss Carla Hodgekiss and Wendell "Chip" Black, both seniors, presented signed petitions to the Cape Girardeau City Council, and asked the council to review the situation at the shelter.

The pupils were spurred into action by reports of animals being clubbed during captures, and by reports that poor protection from adverse weather conditions had caused the death of several puppies and dogs.

The pupils stated that puppies had been found frozen in water bowls during the winter, and that many dogs had drowned when nearby Cape La Croix Creek flooded in the spring and summer months. The pupils' allegations were confirmed by Mr. Carter.

The council promised to review the pupils' requests when the petitions were presented, but no further action had been taken until the police department announced their renovation plans.

The Humane Society of Southeast Missouri was organized in 1976.