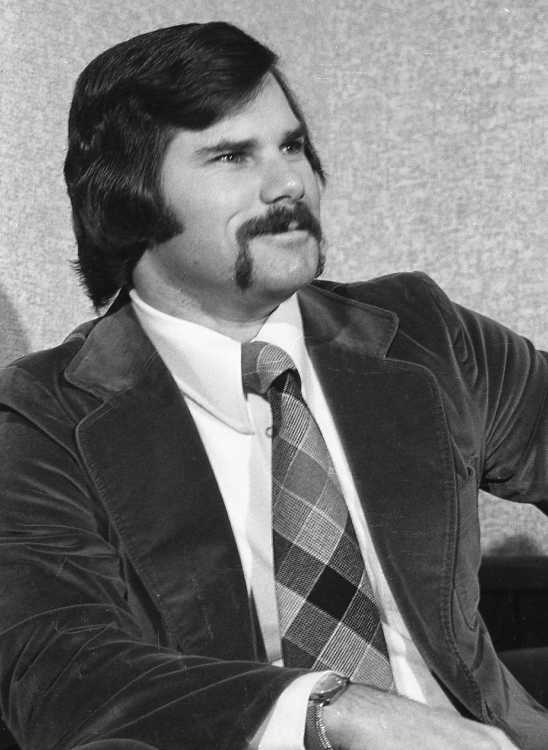 Al Hrabosky, ace reliever of the St. Louis Cardinals, came to Cape Girardeau Monday night, humbly proclaiming that he was "the greatest athlete," and that he would return next year at this time as a member of the world championship baseball team.

Hrabosky was in town as the featured speaker at the Cape Girardeau Jaycees' 34th Annual Distinguished Service Award-Bosses' Night Banquet held at the Holiday Inn. He also held a press conference at the Ramada Inn prior to the dinner.

Nicknamed "The Mad Hungarian" by his teammates, Hrabosky said that he came to the Jaycee affair not any better than those attending, and probably worse because, "You don't get to be called 'The Mad Hungarian' for nothing."

Speaking of the bosses being honored at the banquet, the lefthander commented on the Steve Carlton contract negotiations with the Cardinal management a few years ago. "Carlton said some things in print that he shouldn't have. Mr. Busch pays me a lot of money, and I'm not about to say anything about him--at least not in print."

Hrabosky said in a question-and-answer period following his speech that he was all for Jim "Catfish" Hunter getting the huge contract from the Yankees that he signed recently, but noted that he didn't think it would drive all salaries up into the millions.

"Jim Hunter's situation was unique in the fact that he was a free agent in baseball at his prime," Hrabosky said. "Usually a player is getting old when he's released and can't demand a huge contract. Hunter isn't getting any more of an annual salary than some other players. Most of the extras came because he was a free agent. He was worth all that money just by the fact that 20 clubs were willing to bid that high to get him."

Addressing the "smart aleck" that asked about his practice of standing behind the mound before pitching, the 25-year-old said, "Really, it's just my way of facing pressure. I get myself psyched up to meet the challenge. Then I turn around and hypnotize the batter."

Hrabosky was a little more serious in his replies to the media at the press conference preceding the banquet. He gave his version of the Cardinal starting lineup for opening day "regardless of what happens in spring training." The only changes he noted from last year would be Keith Hernandez at first base and Ed Brinkman at shortstop.

He said that he expected Bob Gibson to have a great year because, "It may be his last one and he wants to go out on top."

Hrabosky predicted that the Cardinals would be stronger overall by having a solid infield with Mike Tyson, Ron Hunt and Teddy Martinez as top-notch utility backup men.

St. Louis pitchers and catchers are to report to camp at St. Petersburg, Fla. on Feb. 23, with the rest of the team expected on March 1.