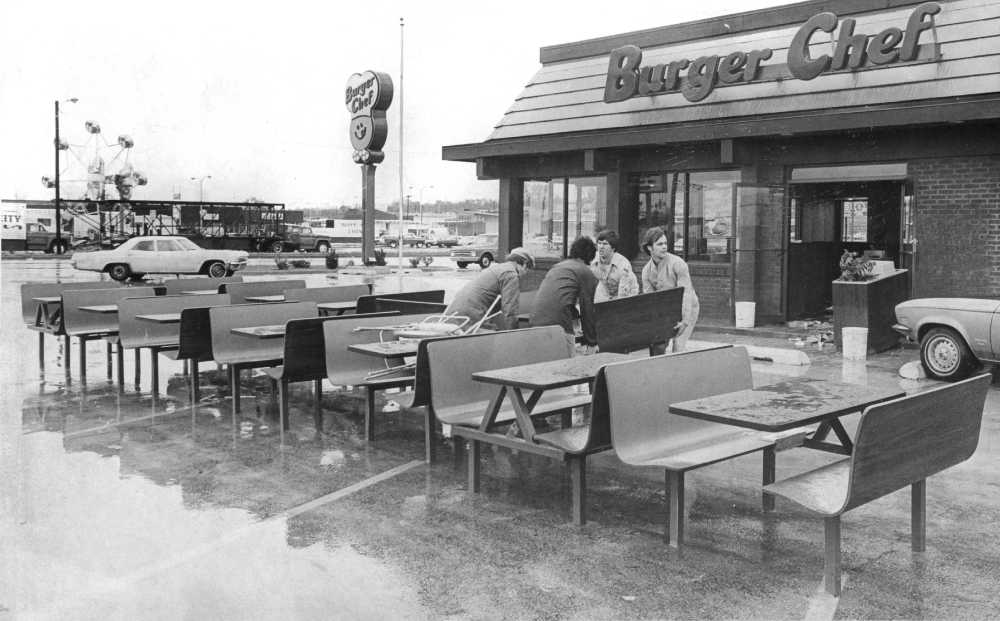 Workmen remove the tables and benches from the Burger Chef on William street as the clean up begins after Sunday night's flash flood. No damage assessments have yet been made to indicate the full extent of the monetary loss resulting from the more than 7 inches of rain which fell on the Cape LaCroix and Walker Creek watersheds. (Fred Lynch photo)

A gentle spring rain that began here early Sunday morning turned into a vicious flash flood by nightfall, forcing about 100 persons from their homes and inundating several parts of the city.

By 8 a.m. today, 7.38 inches of rain had been recorded by the Federal Aviation Agency flight service station at Municipal Airport, the most rainfall here since a flash flood in May 1973 dumped 9.5 inches of rain on the city.

Damage estimates for Sunday's flood are as yet unavailable, but the toll is expected to be high.

Areas hardest hit by the flash flooding which began at about 6 p.m. were in the Town Plaza and Cape West shopping areas, along Terry lane, both adjacent to Walker Creek and near Gaslight Trailer Court, Route W along Cape LaCroix Creek, and a major portion of south Cape Girardeau.

Approximately 200 stations, mainly in the west end of the city along Kingshighway, were reported out of order early today due to water and wind damage. Jack Winsett, Southwestern Bell Telephone Co., manager, said crews have begun work to restore the lines, but high water is preventing some repairs. He said he is uncertain when complete service can be resumed.

All available police manpower was brought into service in the emergency period, including many citizen volunteers with four-wheel drive vehicles and individuals with boats.

By 1:30 a.m. today, floodwaters began to quickly recede, and by this morning homeowners and businesses were faced with the grim prospect of cleaning out several inches of mud and debris left by the murky, swirling waters.

Chief of Police Henry H. Gerecke said about 100 people were evacuated from their homes. They were taken to the New Bethel Baptist Church in south Cape Girardeau, to motels and to the National Guard Armory on Independence.

Hal B. Lehman, business manager for the Cape Girardeau Public Schools, said he received a call at about 10:30 p.m. from Chief Gerecke, requesting emergency space to take care of flood refugees.

The Central Junior High School gymnasium and the upstairs of the Vocational-Technical School were prepared to receive flood victims, Mr. Lehman said, but at 12:30 a.m. the chief notified him that permission to use the Armory had been granted by Gov. Joseph P. Teasdale, and flood victims would be taken there.

The high water along Kingshighway made accessibility to the Armory early Sunday night nearly impossible.

Loaves of bread from the Hart's Bread Co. on Kingsway were floating in floodwaters near Terry lane, where persons forced out of their homes by the 1973 flood made quick preparation to make their way to higher ground.

A Continental Trailways bus carrying a number of passengers stalled at Highway 61 and Route W; there were no reported injuries, and passengers were taken to Sleepy Hollow on Highway 61 North until arrangements were made for other transportation.