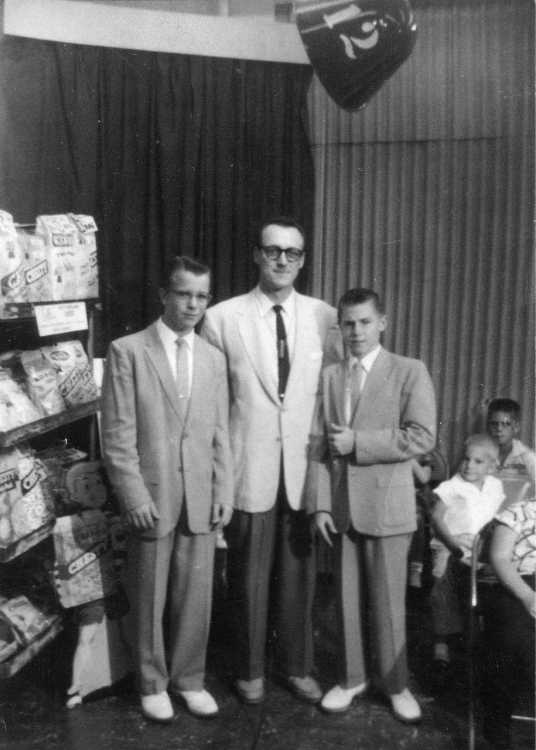 Billy Sisco provided this photograph from 1959 that shows the magic team of Billy Sisco, left, and Jon Kent Fisher, right, posing with Don McNeely at the KFVS-TV studio. The magicians, known as Sisco and Fisher, performed on The Little Rascals show.

Sisco discussed his magic career in a recent interview.

"I was in the ninth grade and Jon was in the eighth," Sisco said. "I told him I do magic. Do you like magic? He said yes, and we became a team all through high school until 1960."

They started performing at the local social clubs, Optimists, Rotary Club, Jackson Homecomers, birthday parties. One of the biggest paying jobs was for the Southeast Missourian Christmas party one year.

"We got 30 dollars, 15 dollars each at the Southeast Missourian," he recalled. "Prior to that it was like 5 dollars apiece."

"It was amazing. Any place in town we went, little kids were staring at us and coming up to get our autographs. We kind of felt, wow!"

Their magic act came to an end when Sisco started barber college in December 1960. (At age 72, Sisco is still cutting hair after 52 years.) Fisher graduated in 1961 and went on to a music teaching career, eventually becoming band director at Central High School.

"We could do a complete hour show," Sisco said. "We performed so many times around the area that they knew our program about as well as we did.

"At the end of each program at a club, we would have the comedian of the crowd in the act. We had a couple of people come and tie the person's hands and feet, but always in the wrong place. He was supposed to be tied up on the other side of the room, so he had to get over there the best way he could. Jon was going to put a sheet over him and untie him instantly.

"Well, we would run out of time. The person in charge would come over and say, 'I'm sorry, your time is up.' So we would leave him tied up and walk off."

Most of their performances were at night.

"Quite often I didn't have to hand in my homework the next day. Mrs. Wright, at Central High, especially. I would tell her that we have a magic job tonight, and she would say, 'Oh, that's OK, Billy. You just hand it in the next day.'"

The magic duo floated a person in the air a couple of times.

"That was over at the Trinity Lutheran men's club because it took a stage. We floated my sister in the air."

"The vanishing bird cage was $19.50. You held the bird cage in your hand and it was PHHTT! Gone! We used a rubber bird because we just didn't have the heart.... Harry Blackstone made that famous."

Sisco's favorite trick was catching goldfish out of the air with a rod.

"We had live goldfish. I did the rod, baited the hook, flipped it out, fish dangling. Jon gave it to me and I put it in a bowl. We could do three, but we only had the nerve to do two.

"We saw two ladies doing that trick on the Ed Sullivan Show at the time when we were doing it."

A favorite was the Zombie Ball, "with a silver ball on a table covered with a cloth that goes all the way through the air and floats all over," he said. "And the Chinese linking rings. The club liked it because they had someone come up and they couldn't link the rings. You'd make all kinds of figurines, a rose, a butterfly."

One of their tricks needed extra care in storage between shows. A pigeon that they would make disappear.

"Jon kept the bird at his house."

Sisco and Fisher performed their magic program for the first Dairy Festival of Cape County, as reported in the July 18, 1957 Southeast Missourian:

A special program has been arranged for the first annual Dairy Festival of Cape County, to be held at 7:30 o'clock Friday night in the school stadium in Jackson.

Special music will be followed by a program of magic, to be given by two Cape Girardeau boys, Jon Kent Fisher and Billy Sisco.

A championship milking contest will pit Mayor Walter H. Ford of Cape Girardeau against Mayor Larry Novak of Jackson. This event is to be judged by Marvin Campbell and Agent A.D. Arnhart.

At about 9 o'clock the Maid of Milk will be chosen, from among eight pretty girls who have been entered, with the backing of business concerns. The winner will be given valuable prizes and will be taken to the Ozark Empire State Fair at Springfield, Aug. 10 to 16, to compete against Dairy queens from other counties. The judges will be Mrs. B.W. Harrison, Carol Schowengerdt and Landree Carron.

Later square dancing will be enjoyed, with the music to be by Red Ervin and his band.

Sisco and Fisher appeared in other shows as reported in the Southeast Missourian, including the May Greene Parent-Teacher Unit variety show in 1958. They also performed in 1959 for the Trinity Lutheran Guild 12th anniversary banquet and also the Chamber of Commerce tour for 4-H Clubs in Cape County.

Here is a 2011 story of Billy Sisco marking 50 years as a barber in Cape Girardeau:

Here is a 2017 story of Billy Sisco from The Best Years. He is still cutting hair at age 75: