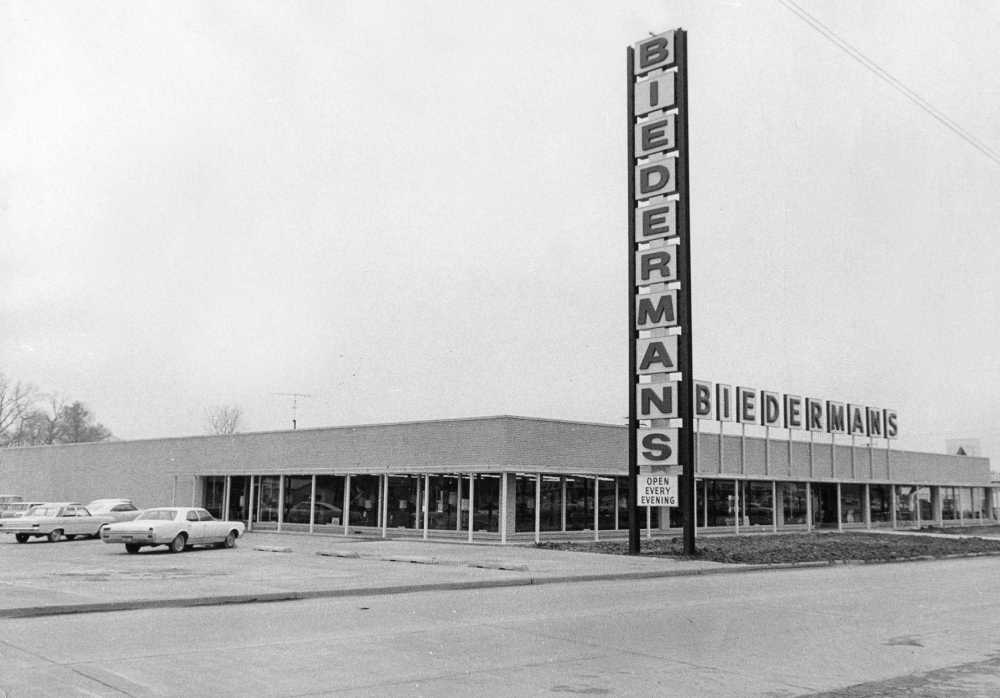 This new 32,000-square-foot Biederman Furniture Co. store at 2103 William street, across from Town Plaza, held its grand opening today and will continue this week.

Formal opening ceremonies for the largest retail outlet of the Biederman Furniture Co. outside the greater St. Louis area began today when the firm introduced its new 32,000-square-foot William street store to the public.

This store, nearly double the size of its outlet at 119 North Main street, features an expansive open type display arrangement on the interior and along the 265 lineal feet of window display area built flush with the floor.

Wendell Evans, Biederman president, said, "We found that our original store was no longer large enough to give Biederman's customers the unlimited selections they expect and deserve. Now homemakers will find the same high standards of dependability and service as before plus a really complete selection of smart styles, bright colors and latest designs to give them a fresh slant on decorating techniques for their homes."

The new outlet occupies a building erected specifically for it by Clyde Foeste and includes a 100-car concrete parking lot on the east, receiving dock on the south and also a receiving warehouse on the south.

The interior features constant 72-degree temperature, sound-controlled ceiling, wall-to-wall carpeting and incandescent lighting. It provides a large appliances and white goods center at the southeast corner. Rugs, televisions, radios and stereos are on the west side. An array of furniture groupings begins at the northeast corner and extends around the window display areas.

All store personnel, including Wm. Poole, manager, reside in the Cape Girardeau area. Mr. Poole has been the manager here for more than three years and has been with the firm 12 years.

Plans are to keep the Main street store in service for the time being.

Biedermans new owner-managers say: "We're here to stay and we're going to prove to you that Biedermans is the place to save on all your home-furnishing needs!"

After 88 years of faithful service...GOING OUT OF BUSINESS! Flooding the mind with memories (now regret) for all the Biedermans team and treasured customers. For you, however, it's one of America's great opportunities...to save!

JC Penney Co. moved from downtown into the former Biedermans building at 2103 William St. in 1976. JC Penney moved further west in 1981 when West Park Mall opened, as one of the mall's anchor stores.

In 1986, Du-Shell's Furniture opened in the building.