Lights out at Smitty's Tavern 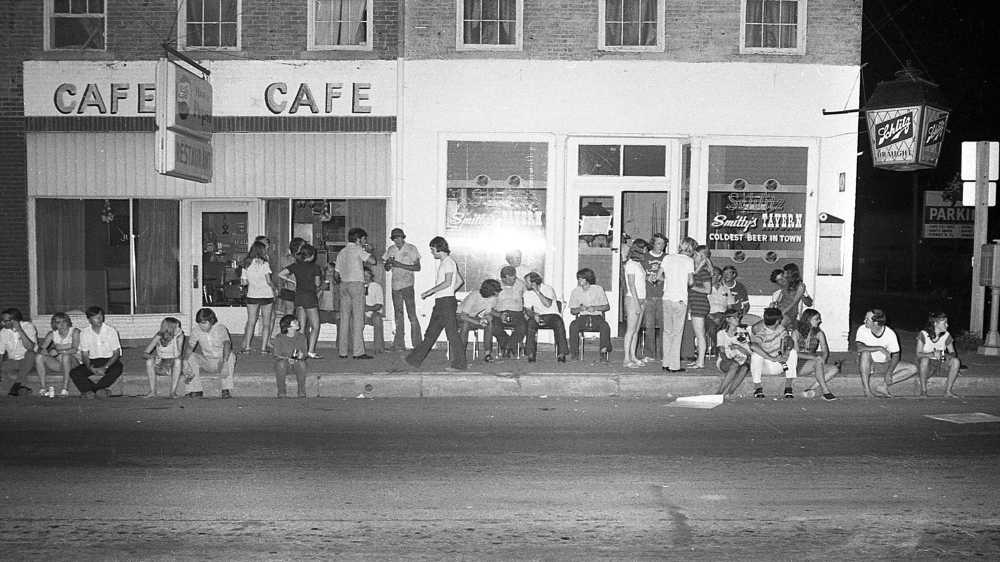 Where were you with the lights went out?

When the lights went out Monday night in Cape Girardeau and surrounding communities, many people hopped into their automobiles just to get a look at the city sans illumination. Others, like patrons at Smitty's Tavern, 637 Broadway, simply moved themselves to the curb outside where they sang songs and waved at cars passing on darkened Broadway.

The power failure that blacked out portions of southeast Missouri for nearly five hours during the night is believed to have been caused by either a faulty transformer or bus system at Missouri Utilities Co.'s substation south of Cape Girardeau.

The major blackout affected an estimated 500-square-mile area in portions of Cape, Scott and Mississippi counties.

A total of 10 communities were without power for periods ranging from an hour to nearly five hours. The blackout lasted four hours and 45 minutes on Cape Girardeau's south side, the last area to which power was restored.

Remember those spine-tingling campfire stories about things that go bump in the night?

Well, there weren't any campfires Monday night, but there were some bumps and a few thumps as people felt their way through a massive power failure that plunged a large portion of southeast Missouri into total darkness.

Lights faltered, air conditioners sputtered and television sets flickered moments before the blackout, leaving Dr. Joe Gannon in a surgical lurch with his patient and the Cincinnati Reds and Los Angeles Dodgers with a 2-2 tie in the eighth inning.

The scene was an eerie one, with natural gas lights on lawns the only pinprick of light to be seen with the exception of auto lights and a scattering of candles in some homes. For motorists coming into town east on William, it was a city of shadows, the landscape devoid of the accustomed colored neon blink of signs beckoning customers to stores and restaurants.

As food stored in refrigerators slowly began to melt, so did people. Most sought refuge from the 83 degree heat outside, choosing to wait out the power failure with neighbors. Few candles were seen in windows on a drive through the city, but a number of kerosene lanterns were providing a glow of light and camp-like atmosphere in yards.

KFVS Television here reported the station was forced off the air throughout its broadcasting area at the onset of the blackout, but was able to resume telecasting with auxiliary power to areas outside the power failure in approximately 16 minutes. Local radio stations were also unable to transmit for a somewhat longer period of time.

Improvisation was the key during the blackout, which lasted up to five hours in some areas, as people relied on candle power to perform ordinary household tasks. At several supermarkets, cars, headlights on, were faced toward store fronts to help provide light for employees checking out late customers.

Many youngsters got an early start on Fourth of July festivities, shooting fireworks during the blackout. In some neighborhoods, the colored glow of roman candles was the only light to be seen.

A group of approximately 30 college students gathered at the corner of Broadway and Sprigg with hastily-made signs warning motorists to "Repent! The end is near." And during the time local radio and television stations were off the air, thoughts were called up of H.G. Wells' "War of the Worlds," the science fiction radio program that triggered a national panic. There weren't any men from distant planets reported in the vicinity, but a black and silent Broadway created a feeling sinister enough for anyone who might still believe the Moon is made of cheese.

At Lakeview Estates, residents took advantage of the blackout to hold an impromptu swimming party. And in another part of the city one young couple, apparently determined not to let a romantic dinner for two melt into a sticky glob of candle wax, simply moved the proceedings outside where a checked tablecloth spread on the grass, a candle propped in an empty bottle and a sliver of moonlight set the scene.

If there was one good thing to be said about the power failure, it is that the lost art of conversation surfaced without the interference of television, record players or radio. Neighbors chatted outside in lawn chairs, and families entertained each other. "Conversation," one woman commented, "can be pretty interesting. I'd almost forgotten what it's like to just talk."