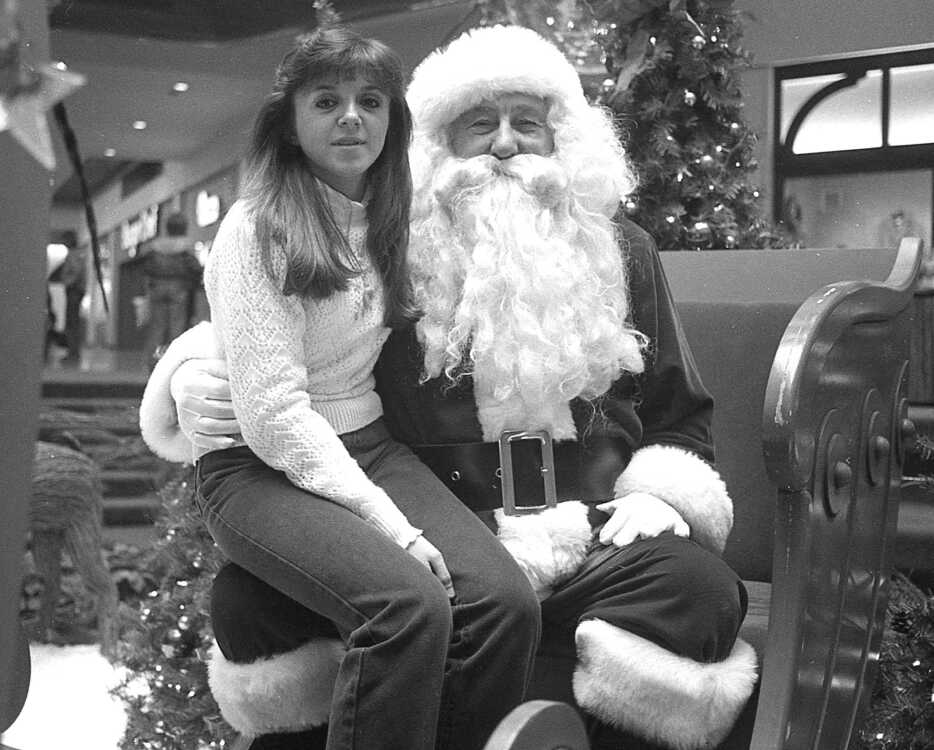 Lisa McMillan, the Santa supervisor at West Park Mall here, sits on the knee of Warren Strack, alias Santa. She sat on the same knee 19 years ago. (Jay Wolz photo)

Warren Strack won't even venture a guess when asked how many people have sat on his lap. But if you're under 40 years old and grew up in this area you probably did.

You see, every December for the past 32 years, Strack has been Santa Claus to thousands of youngsters in Cape Girardeau. He's been the featured attraction in parades, and at parties and shopping centers. For the past four years he has been one of the full-time Santas at West Park Mall.

But don't tell the kids that he's one of several Santas. To them he is THE St. Nicholas. After all, the 63-year-old Strack certainly looks the part...right down to the twinkle in his eyes. And although you can't see his smile because of his beard, those eyes tell you he's a jolly old fellow.

"I've heard a lot of kids when they pass me say, 'Mom, that was the real Santa Claus!'," Strack chuckled.

He began his career as Santa to appear at a Christmas party. Since then he's worn out several Santa suits.

And over the years Strack believes he's learned the secret to being a good Santa. "You've got to be friendly with the kids," he explained. "You've got to laugh and cut up with them."

Have children changed over the years? "It seems like children are about the same," he said. That is, they're about the same in that they tend to believe in Kriss Kringle until they reach age 6 or 7. However, there isn't much similarity between what children asked for 32 years ago and what they want for Christmas today.

"Used to be it was a wagon or a tricycle," Strack recalled. "Now you get kids wanting electronics and Cabbage Patch dolls." Other popular requests this year have been He-Man and Michael Jackson dolls. "Oh, that Michael Jackson is big this year."

After a career as Santa that has lasted more than half his life, Strack points out that several generations of kids have sat on his lap. "I'm getting parents in here now who say they used to sit on Santa's lap," he said, adding this reporter. "You may have sat on my lap, too."

Although the real Santa knows the names of every boy and girl, Strack admits he's a little weak in that department. But even if Strack couldn't remember her, there's at least one person who certainly remembers him.

It was 19 years ago that a little girl named Lisa climbed on Santa's lap at Town Plaza Shopping Center here and asked for a doll for Christmas. Her brother and sister asked for pogo sticks.

Although she was only 3 years old, Lisa knows exactly what she and her brother and sister asked for because she has a photograph record of their conversation with "Santa" Strack.

The reason that little girl worth noting is that that now, 19 years later, Lisa McMillan has become the "Santa supervisor" at West Park Mall, in charge of scheduling Santas like Strack who sit in the mall's center court.

Miss McMillan confirms that Strack has been one of her most popular Santas. "I have a lot of people call and ask when he would be here," Miss McMillan noted.

Strack retired seven years ago after a 25-year career with the Cape Girardeau Fire Department. For 14 years he was the city's fire inspector.

Now, he's facing retirement again. Because of a bad back, Strack is under doctor's orders to hang up his beard. He'll continue to make appearances at parties and various other special occasions, but he'll be unable to continue working as a full-time Santa. "It's a semi-retirement," he explained. "I'm gonna let the elves take over."

Although he has to slow down some, he isn't letting the semi-retirement dampen his Santa sense of humor. "You know why Santa has a garden, don't you?" he asked. "So he can Ho, Ho, Ho!" 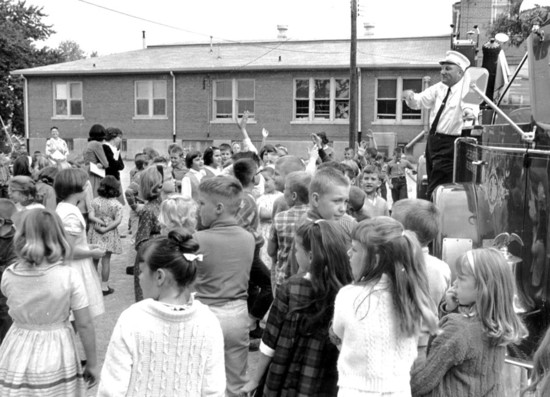 In this photograph published Oct. 7, 1965, Warren Strack, fire inspector for the Cape Girardeau Fire Department, talks to students at Trinity Lutheran School at a fire drill. Comments were published May 23, 2002 in the Southeast Missourian.

Cathy Blyze was surprised during a recent visit to Cape Girardeau from Columbus, Ohio. "I opened the Faces & Places page and there I was, along with several of my old classmates," said Blyze in reference to a photograph on the page.

Many of the people were familiar with the photo, which was taken about 30 years ago.

A number of people recalled the fire drill in the photo, taken at Trinity Lutheran School. "I was a student at the school then," said Donna McClard.

Debbie Hinkebein said her daughter was a kindergarten student at Trinity when the photo was taken. Keith Huckstep spotted his brother in the crowd. Wanda Steffens said she was a teacher at Trinity at the time. Dave Hente said he remembered the annual fire drill events as well.