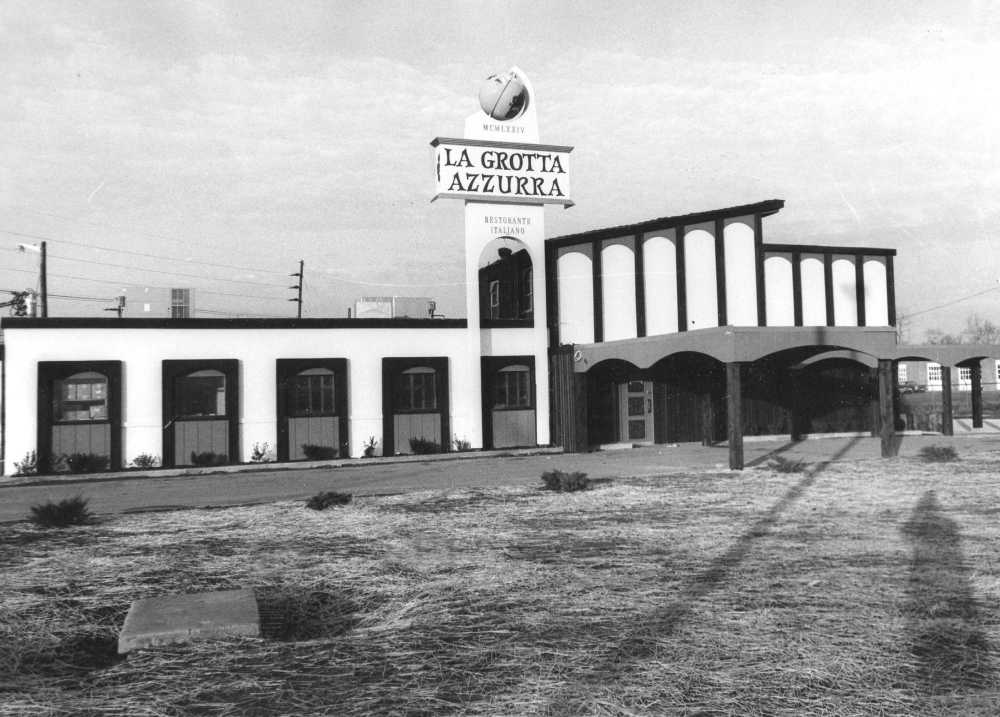 La Grotta Azzurra is the newest restaurant in Cape Girardeau in December 1974. The plush Italian atmosphere is the result of complete renovation of the old Airline property on Kingshighway. (G.D. Fronabarger photo)

Business and Industry around Cape Girardeau

Perhaps the most significant change in any one commercial category in Cape Girardeau in a decade has taken place in the restaurant business. This has occurred mainly because a few years back this community had little to offer the dining out public. With the increasing trend to dining out came the opportunity to develop the restaurant business here. It has been gradual up until the last five years when new motels and changes in ownership of other establishments brought accelerated growth in the number and improvement in the type of eating establishments. That is culminating this winter in the opening of three new eating establishments ranging from the quick service to the gourmet type.

The most elaborate of these new establishments is La Grotta Azzurra, a plush new Italian restaurant carrying a dinner menu with offerings that include antipasto, pasta (spagetti, mostaccioli, ravioli, cannelloni and lasagna), rice milanase, pesci, salads, steaks, pork chops, beef roll and the carne gamut of eggplant with cheese, chicken cacciatore, veal marsala, parmesan and scaloppine, a line of fine desserts and an extensive list of dinner wines, both imported and domestic.

This new restaurant, to be the only one with a strictly Italian flavor between St. Louis and Memphis, is located in the old Airline property on Kingshighway. Considerable investment has wrought a miracle of change, a renovation that has produced a showplace. Richard Barks and Ronald Sietz, who have considerable restaurant background, have combined their work into the Barks and Sietz Corporation, as the operating firm. The establishment is scheduled to open the latter part of next week after a few "dry runs," the management says, to get things running smoothly before the public is received.

The old building has been completely rebuilt, with nothing of the original remaining except the general outline. The interior has been replaced with all new kitchen equipment, new lounge and dining areas which include one main dining area that will seat slightly more than 100 persons and two other smaller dining areas for small parties. The elaborate finishings include cypress paneling, copper tone carpeting and a chandelier of Italian import for the lounge, along with copper covered tables, blue carpeting and oak pattern Formica table tops for the dining areas, along with chandelier-type lighting. A full acre of concrete has been laid at the west side of the building for parking.

Carl Mamenella, for several years with restaurant management in St. Louis and the area, will be general manager. Head chef will be George Honeywell, for 30 years a chef in the Navy, and Al Puddy, who has been affiliated with other restaurants in this area, will also be a chef. Waitresses, directed by Miss Geri Wissman, will be in black and white uniforms.

"We have been planning for some time for a restaurant of this type for Cape Girardeau and have incorporated about everything we know to make it outstanding," Mr. Sietz said. The luncheon menu will be sandwiches.

(The other restaurants to open were Port Cape Girardeau and Long John Silver's.)

In 1976, the Golden Dragon restaurant opened in the former La Grotta Azzurra building at 217 N. Kingshighway.

Alliance Bank is now located on the site.