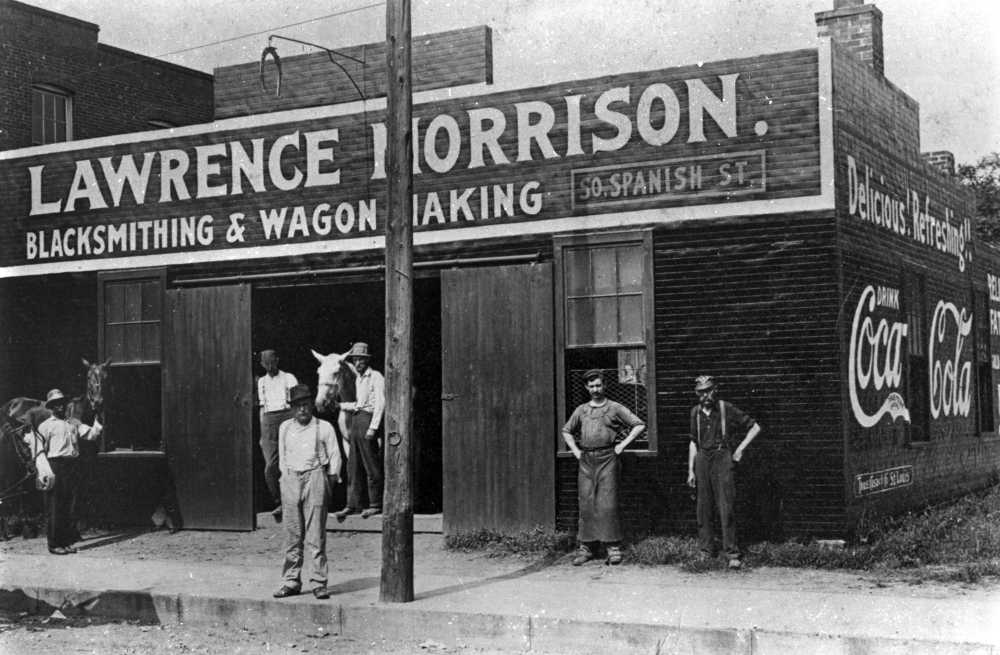 Harry Morrison has re-opened the Morrison blacksmith shop on South Spanish street after having it closed for several weeks on account of being unable to secure a blacksmith. Joe Schonhoff is now in charge of the shop.

In Cape Girardeau, as in other towns, the blacksmith was an essential craftsman in the early days. In its golden age, blacksmithing was a number one trade in Cape, with as many as 12 shops being located here at one time. Blacksmithing and wagon-making went hand in hand and partnerships of this type were very common.

There were the shops of Vogt & Steimle, on Good Hope street; Banks & Beaudean, on Spanish street, Brune & Bleckwendt, on Broadway, and Bohnsack, Blacksmith and Wagon-Maker, also on Broadway.

A blacksmith was essential to the early town. To his shop, usually in the center of town, came the citizens with their items to be welded on the forge. By heating and hammering, iron was reshaped into objects of utility and beauty.

A hearth was built to conduct smoke to the chimney. In easy reach about the hearth were the blacksmith's tools--bellows, anvils, tongs, sledge hammer, file, vise, workbench, chisels, mandrils, race wheels and others. Special equipment for shoeing horses and repairing farm machinery were also in his shop.

The blacksmithy made tomahawks, scalping knives; he ground swords, razors and scissors; he cleaned and polished pistols. The picturesque old grills and railings found on old dwellings, were also his handiwork. Man of many talents, he also made weathervanes, hinges, locks and keys for the town residents.

To become a blacksmith, boys from 10 to 14 years of age began an apprenticeship, training on the job from seven to nine years. Under the direction of a finished craftsman, these boys were taught the trade and also were instructed in reading, writing and arithmetic. Their employer also clothed and fed them, and gave them a small amount of spending money.

Today there are few such shops remaining. Locally there are no blacksmith shops. However, Frank J. Brockmeyer's welding shop on Spanish street is as near to a replica of a blacksmith shop as can be found anywhere today. Until 1940 the shop did horse shoeing, but since then has switched exclusively to plow sharpening and welding.

This shop on Spanish street, founded about 1890 by Banks & Beaudean just a little north of its present location, has the same equipment the blacksmiths used 60 years ago. Mr. Brockmeyer still uses much of the same equipment, and heats his irons on the same forge.

When the shop was opened, Mr. Banks was blacksmith and his partner, Beaudean, was the wagon-maker. In 1906 Banks sold out to Matt Morrison, and in 1914 Morrison moved the shop from its original site (where Midwest Dairy is) to its present location. Morrison and his assistant, Louis Kohlfeld, ran the shop until Morrison's death in 1917.

The Morrison estate operated the shop, with Joe G. Schonhoff as blacksmith from 1918 to 1921, when Mr. Schonhoff bought the shop. Mr. Brockmeyer, present owner, began as an apprentice under Mr. Schonhoff April 26, 1925, and bought the business in 1949.

Cost for shoeing a horse was $12 when Mr. Brockmeyer began his apprenticeship. The four shoes could be fitted and put on in about 45 minutes, "if you really worked at it," Mr. Brockmeyer said. "I began working for $20 a week, six days, which was about 20 cents an hour. But you know, I came out about as well then as I do now. A pair of overalls cost 69 cents then. Today I pay $2.95 a pair for them."

The business of Vogt & Steimle included two buildings which faced each other on Good Hope street. John Vogt had his blacksmith shop where Unnerstall's Drug Store is, and Ferdinand Steimle made wagons in a building across the street, where Nunley's Drug Store is today.

Joe Steimle well remembers his father's wagon shop. The family residence, a two-room frame house, was directly behind the shop. Later Steimly moved his business a block away, just west of the Farmers & Merchants Bank. He went out of business about 1917 when wagon-making began to slack up.

Dr. Anita Bohnsack also remembers something of the blacksmithing days. Her father, Wm. H. Bohnsack, had his own shop located where the Broadway Fruit Market is today. Dr. Bohnsack has a remembrance of her father's trade--a set of horse shoes which he made and entered in the Cape County Fair. Mr. Bohnsack won a prize for his display which included a racing shoe, a hobble shoe and many other types.

Mr. Bohnsack had an assistant and also employed a wagonmaker. He closed the shop in the 1920s.