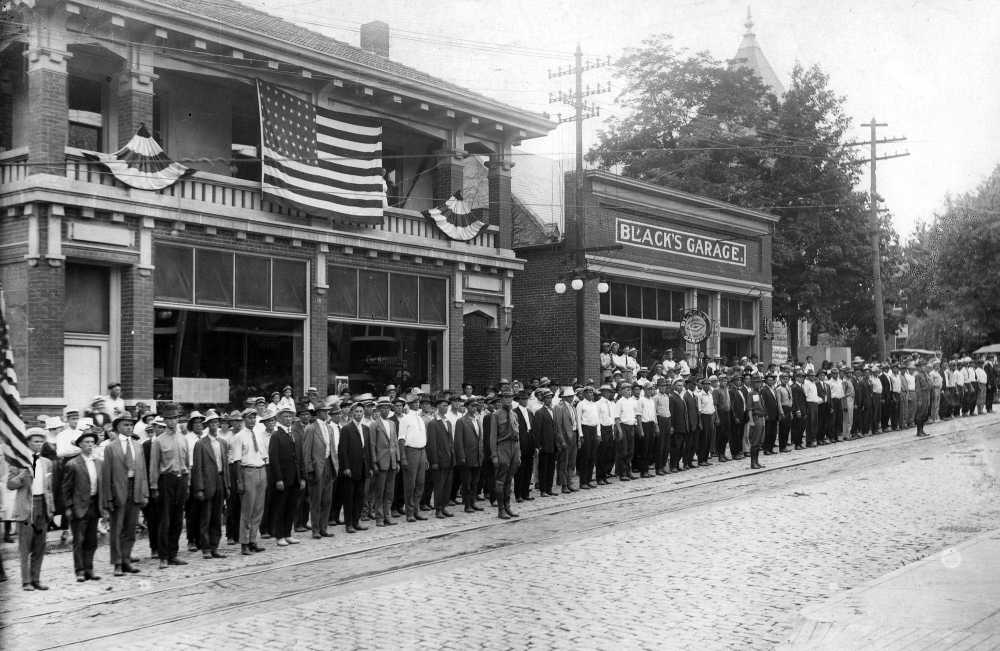 In August 1920, Black sold his automobile business to Henry Dooley. About this time, Black decided to enter into the hotel business and purchased the Idan-Ha Hotel at Broadway and Fountain Street in Cape Girardeau, operating the hostelry until 1930.

Black first moved to Cape Girardeau from Lithium Springs, Mo., in Perry County around 1909, and served for 14 years as city alderman. He went on to become the city health officer. When the position of city health officer came open, Black and Henry Haman Jr. both wanted the job. The two men decided to flip a coin over who would get the position, and Black won the coin toss.

Black's Garage building was razed in the late 1920s to make room for the new First Presbyterian Church education building.

The photograph shows members of Company L, Sixth Missouri Infantry, assembled in the 200 block of Broadway in 1917, in front of The Daily Republican and Black's Garage.

The call to federal service came Aug. 5, 1917, and men from throughout the district poured into Cape Girardeau. They stayed in hotels and rooming houses, waiting to report to camp at Nevada, Mo. Eventually the unit fought in France, at the Argonne Forest, which broke the back of the German military.

On May 9, 1919, four trains of 14 cars each pulled into Cape Girardeau, bringing back the men of the Sixth Regiment, by then renamed the 140th Infantry Regiment.

Next to Black's Garage was The Daily Republican building which later became the Cape Girardeau Chamber of Commerce offices. In the summer of 1974, the building was purchased by the First Presbyterian Church, which razed it in 1975.