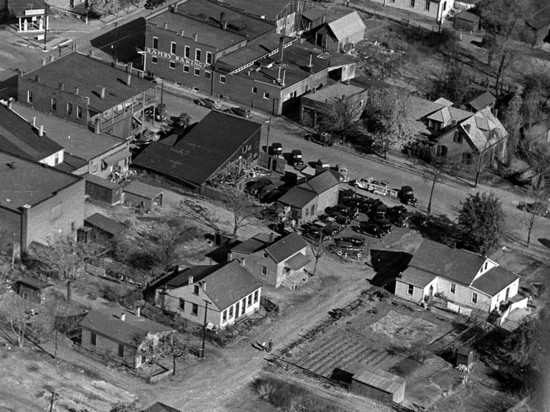 A small residential area known as Shinbone Alley was located behind the commercial buildings in the 600 block of Good Hope street, to the south between South Frederick and South Sprigg streets, in Cape Girardeau. This aerial photo by G.D. Fronabarger looks to be from the 1940s.

We have identified some properties by using city directories from 1942 and 1949.

In the upper left corner is a Wides Oil Co. gas station at the corner of Good Hope and Frederick street. Clearly marked across the street at 533 Good Hope is Bamby Baking Co. To the south is a small building at 312 S. Frederick listed as Civil Aeronautics Administration.

Next door is the Christian J. Hirsch home at 318 S. Frederick St. The 1932 city directory lists Hirsch as the owner. The house is historically known as the location of the first operations of KFVS radio. Oscar C. Hirsch began broadcasting from the living room on July 22, 1925. About one year later he relocated the radio station to the H-H Building on Broadway. The Hirsch house originally faced south toward Morgan Oak street and was located on Shinbone Alley. Soon after Christian J. and Christina Hirsch acquired the property in 1894, an addition was built on the house.

Christian J. Hirsch was born in Cape Girardeau in 1856 and served as city collector for 10 years. He was also in the wholesale grocery business. After his death in 1941, his wife continued to live in the house. Later, their daughter, Ione, an artist, resided at the home until her death in 1962. Another daughter, Helen Workman, took up residence in the early 1970s. The house was razed in 1997.

--from Lost and Saved Landmarks

The photo shows an automobile dealership at 315 South Frederick.

The 1949 directory lists the houses on Shinbone Alley to the west of the car lot, including rear addresses at 613, 615 and 621 Good Hope.

The house at 615 Good Hope is noteworthy because it is the only house on Shinbone Alley still standing today. In the aerial photo, it is the middle house of the three on the north side of the alley. Two people are seen walking in front.

An 1883 Sanborn map of the city designates one of the alleyways as Shinbone Alley. It ran for three blocks east and west between Frederick and Sprigg streets, half a block south of Good Hope Street. Cape Girardeau historians are at a loss to pinpoint the origin of the name, so people have come up with their own explanations.

Thomas M. Meyer, a longtime real estate agent in the area, attributes the name to a former city official who busted his shinbone on a big rock in the alley. The official supposedly removed the rock to make the alley safe for shinbones.

Along Shinbone Alley sits a house with boarded-up windows. The house is equipped with a satellite dish and a vehicle is parked in the rear. No one answers the door.

James Baughn has the history, photos and maps of Shinbone Alley in his blog:

Ken Steinhoff explores Shinbone Alley with "A House in Haarig" in his blog.