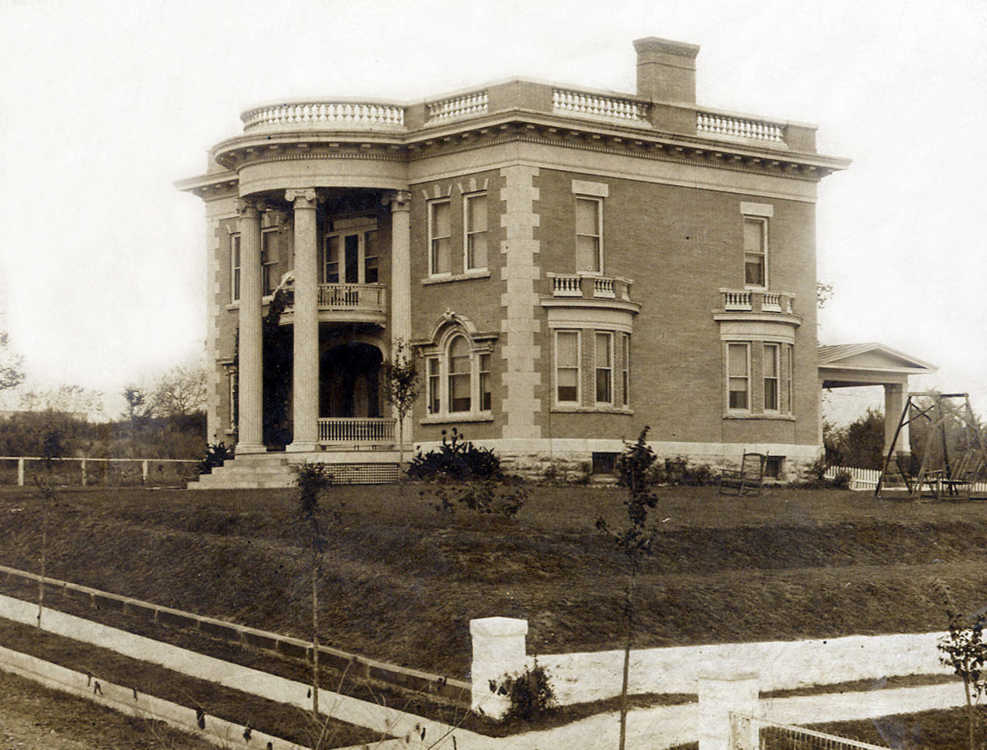 The former L.B. Houck residence on College Hill was one of the buildings razed in 1958 to make way for the new college dormitory for women, Dearmont Hall, at Southeast Missouri State College. (Photo circa 1915, courtesy Jeanette Juden)

Old Residences Will Be Razed

The 52-year-old L.B. Houck residence on College Hill, one of Cape Girardeau's stately homes over a long period of years, will be the first building to be razed under a dormitory construction program which soon will be started by State College.

And not long afterward, as construction progresses, Albert Hall, the residence of thousands of young men and women students from southeast Missouri over the years, will fall before a demolition crew.

Its demise will be followed by the wrecking of another fine old home on College Hill, the property erected by the late mayor and postmaster, H.H. Haas, just a short distance down the hill from the Houck property.

This is the current order of precedence under the construction plan which will erect a $1,400,000 dormitory on a square partially formed by the three buildings at three of its corners.

L.B. Houck, who came to Cape Girardeau in 1885 to enter the employment of his uncle, Louis Houck, started construction of his residence at the top of College Hill on Nov. 2, 1905. He and his family moved into the residence, with its stately columns, on Oct. 10, 1906.

Mr. Houck was associated with Louis Houck in various railroad enterprises and in other endeavors in Cape Girardeau. He sold the property on April 26, 1922, to the late Harry F. Leuer, who was in the insurance business in the city.

The Leuer interests subsequently were sold to Mr. and Mrs. Byron Dormeyer, who now liver in Jefferson City. They, in turn, sold to Col. and Mrs. Joseph Russell in 1951. Two years ago the college acquired the house and ground from the Russells.

The other residence, just down the hill and separated from the Houck property by a vacant lot, was erected by Mr. Haas under a contract awarded on April 17, 1923. The estimated cost of the house was $12,000.

Mr. Haas served as Cape Girardeau's first mayor under the commission form of government. He was elected in 1918, when aldermanic government was abolished, and served until Oct. 1, 1921, when he was appointed postmaster. He held this position until Nov. 18, 1933.

The property continued in the hands of Mrs. Haas until 1951, when it was purchased by Mr. and Mrs. J.E. Kurka. They sold it to the college in a transaction at the same time the Houck property was sold.

Albert Hall was completed in April, 1905, as a privately financed enterprise organized by Louis Houck, L.J. Albert and M.E. Leming. Leming Hall, across the hill on Normal avenue, was finished in 1906.

At the time the Houck residence was built the Academic Hall building for State College was being finished. The influence of the major college building caused Mr. L.B. Houck, a dashing young man who had recently married one of the most beautiful women of all southeast Missouri, Miss Virginia Hunter, of one of the Hunter families of New Madrid County, to desire a residence befitting their station.

So Mr. Jerome B. Legg of St. Louis, one of Missouri's most prominent architects, was commissioned. Mr. Legg was then in Cape Girardeau frequently because he designed the major College building (Academic Hall), which was then nearing completion.

Stonemasons came from Ste. Genevieve to work on the Houck house as well as workmen from St. Louis, and when finished it was the talk of the entire district.

No sooner had the Houcks occupied their lovely home than the late George McBride, then one of the leading lumber men of the district, had Mr. Legg build a large home for him at the corner of Sprigg and North, and which to this day is listed among the loveliest pieces of architecture in Cape Girardeau.

Mr. Legg was an elderly man at that time and soon dropped out of active business. Mr. Louis Houck as chairman of the Board of Regents probably selected him for the College job because Mr. Legg had been commissioned to complete the Union Depot in St. Louis inasmuch as the starting architect had died before the building was finished. Mr. Legg had built either the state capitol or the governor's mansion in Springfield, Ill., and similar buildings in Missouri.