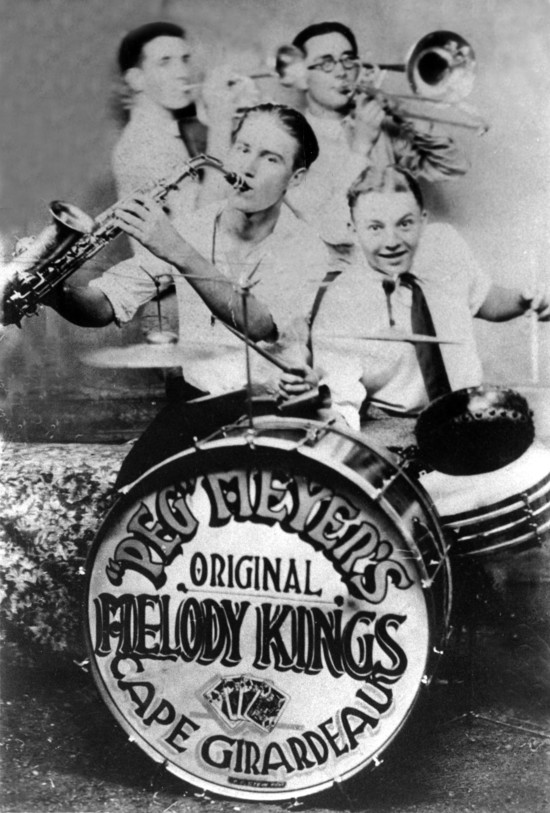 This picture of Peg Meyer's Melody Kings was made in the summer of 1920 with Peg Meyer on saxophone, Berg Snider on drums, Jess Stacy on trumpet and Martell Lovell on trombone.

Raymond "Peg" Meyer was honored for his musical contributions to the Cape Girardeau community with an open house at the Cape Girardeau Public Library to celebrate his new book, "Backwoods Jazz in the Twenties," on June 11, 1980. A story by Joni Adams was published that day in the Southeast Missourian. Here is an excerpt:

"In the early Twenties, there was a new sound coming out of the South that moved north with the fine orchestras of the river excursion boats. Cape Girardeau was on the Mississippi and as a result was among the first towns in the nation to enjoy this new music. It was this new sound, 'riverboat jazz,' that did much to inspire me to become a dance musician."

As his book details, some of Meyer's fondest memories of '20s jazz were the summers he worked aboard excursion boats or river packets, which traveled the Mississippi, Ohio and Illinois rivers. His first river job was aboard the "Majestic" excursion boat in 1921 with his good friend Jess Stacy. Stacy went on to become one of the leading jazz pianists of the 20th century.

"It was a wonderful way to spend a summer," he explains. "It was like we were on a tour of a different town every night. We met thousands of people. During the day, we'd hop in a taxi and tell the driver, 'show us what you got.'"

The boats traveled up and down the river from Memorial Day to Labor Day.

But Meyer's musical expertise was not just limited to the river. He organized several bands which performed throughout the region.

In addition to dance halls, his band often performed at the Broadway theater, opera house, and other localities. "I do not believe there has ever been a time in American history when so many people knew the tunes and lyrics of popular songs. Theater organists played accompaniment to the lyrics of hit tunes flashed on the screen, and the audiences sang with gusto," he recalls.

"In the late teens and early Twenties, jazz raised musicians out of their seats....Musicians in the Twenties practically became contortionists playing their musical instruments in any unconventional manner, standing on chairs, swaying in unison to the rhythms, wearing crazy hats, and clowning in general. Many times I saw Jess Stacy standing on the piano stool squatting down just enough to reach the piano keys. Much of the popularity of bands in the Twenties came from their actions as much as their musical production."

Meyer first became interested in instrumental music when he was a student at Cape Central High School in 1919. During a school performance by the local college orchestra one day, he spied a curved B-flat soprano saxophone.

"I was hooked, not by the sound it produced, but by its looks. I thought it was a cute little rascal," he laughs. The next day, the family ordered one from the local band director.

Things really began to pick up later that year, when Meyer and some friends began performing for students in the cafeteria when students returned from lunch. Included in the group was his life-long friend, Jess Stacy.

"The kids called us 'the Agony Four' and it stuck," Meyer muses. "Our first orchestra was born."

They began performing for pay. They wore clown suits with big red ruffle collars and cuffs and collapsible red and gold clown caps. "We thought we looked pretty sharp."

(Meyer's nickname "Peg" dates back to an elementary school pageant in which he played the role of Peter Stuyvesant, the governor of New Amsterdam, who had a peg leg.)

Over the years, Meyer led many bands, traveling the region in a Ford 1921 T touring car. "I was always a better leader and organizer than musician," he says. One of his favorite bands was the Seven Peppy Pep Peddlers, which performed for area dances and on the stage of the Broadway Theatre in the mid 1920s.

Meyer ended his orchestra days in 1926-27, and worked as an instrument salesman. In that role, he began bands in 55 area schools in Southeast Missouri, Southern Illinois and Northern Arkansas. He taught more than 5,000 youngsters how to play an instrument. Later, he opened a music store. Today, his book on instrument repair (first published in 1973) is still the industry standard across the world. At 86, he still works four hours a day, six days a week repairing instruments at Shivelbine's Music Store in Cape Girardeau.

In a May 12, 1989 Southeast Missourian story by Ray Owen, Meyer said when he got out of college, he served as a band director at Perryville High School three years. He then returned to Cape Girardeau, where he opened a music store in 1934, as a branch store of St. Louis Band Instrument Co. Bill Shivelbine became a partner in the business, and in 1949, Meyer sold his interest in the store to Shivelbine, but remained associated with the operation.

Meyer's first book was a technical publication, "The Band Director's Guide to Instrument Repair," which was considered a required course for music director majors at several colleges.

Meyer Orchestra to Play for Club

The Peg Meyer Orchestra, "A High-Class Combination of Musical Artists," will play at the Country Club Feb. 14 for the Valentine party. This orchestra is composed of Cape Girardeau boys with the exception of William Gadbois, from Cairo, who plays the clarionet. The manager, Peg Meyer, plays the saxophone, Jess Stacy the piano, Martell Lovell the violin and banjo, and Bergmann Snider the drums. The manager stated they have many engagements booked for the spring season. The orchestra will leave the first of April for the Great Lakes to fill a contract for the summer.

Mrs. B. Sands of 328a South Spanish street, will entertain her bridge club and a few other friends with a tacky-masquerade tonight at the Country Club. Bridge and dancing will be the feature of entertainment. Music will be furnished by Peg Meyer's Orchestra.

Peg Meyer, who will lead the orchestra which is to play on the new steamer Cape Girardeau this summer, will leave Saturday for St. Louis to prepare for the first trip to be made next Tuesday night. He was accompanied to St. Louis by Bergmann Snider who will play the drums in the orchestra. Another Southeast Missourian will be in the band, Lair of Charleston having accepted a position on the boat. An orchestra is to be maintained on the boat all summer, it is said.

Peg Meyer, widely known orchestra leader, today announced the opening tomorrow of his new music store, 708 Broadway. Meyer will specialize in high class musical instruments, sheet music and other articles and will handle Pathe phonograph records. On Monday night Meyer will broadcast a radio program through Hirsch's Station, KFVS, at which time a solo will be played on every kind of musical instrument he carries in stock. His father, W.O. Meyer, a merchant, and who years ago was known for his skill as an accordionist, will please his old friends with a number on his favorite instrument. There will also be some novelty numbers and some vocal selections.

Organization of orchestra, to be composed entirely of women and known as Melody Maids, was recently announced by Raymond "Peg" Meyer; new orchestra will make its debut over radio soon and will also play for local dances; orchestra is composed of Mrs. Raymond Meyer, Lucille Baloun, Fern Smith, Mrs. Harold Shaul and Lorraine Senn. 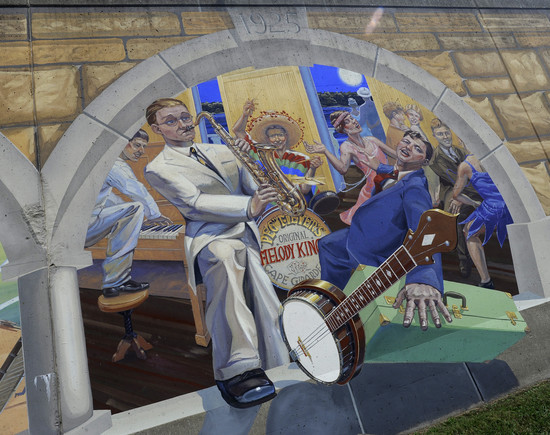 This panel on the Mississippi River Tales mural on the floodwall in downtown Cape Girardeau depicts riverboat jazz in 1925. Here is the reader board description:

Two of the most exciting new trends of the 1920s were jazz and ballroom dancing. The riverboats were ideal locations for both. Here, Jess Stacy on piano and Raymond F. "Peg" Meyer on saxophone, Berg Snider on drums, and Pete Lowry on banjo perform during the Golden Age of jazz. Meyer's jazz band was one of the most popular to play on the riverboats. Most of the early jazz bands wore costumes to add to the fun.