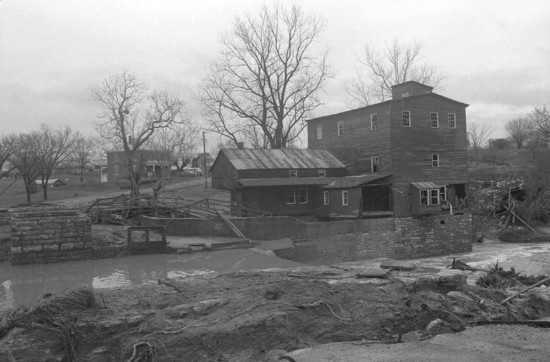 Apple Creek flows past the remains of the truss bridge destroyed by a flash flood in Old Appleton, Missouri, as seen the day after on Dec. 4, 1982. 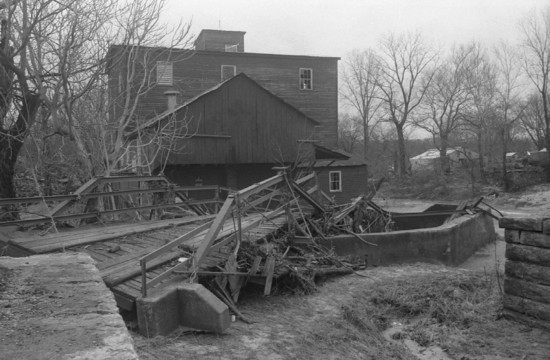 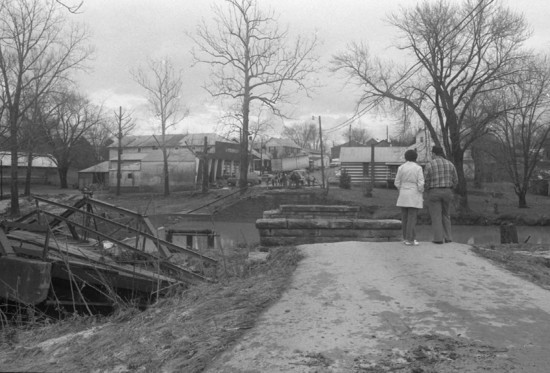 OLD APPLETON - Flooding on Apple Creek today washed away a historic truss bridge and threatened to destroy an old grain mill. A number of cabins and small buildings along the creek were destroyed or damaged and a grocery store was being threatened by the rising waters.

Mrs. Gary Volker, who with her husband operate the Old Appleton Food Mart, said the bridge went out about 10 a.m. "It's gone, it's downstream," she said.

Mrs. Volker said destruction of the bridge brought "a lot of tears."

"The people are proud of the history in Old Appleton. There were a lot of tears shed when it went down the creek," Mrs. Volker said.

She said a large propane tank which had washed downstream became lodged against the bridge before it finally gave way.

The basement of the Volkers' store contained about eight feet of water this morning and if the creek keeps rising water may enter the main floor, she said.

Mrs. Volker said they lost compressors to the store's freezers and also lost the furnace.

"We're going to have a lot of damage," she said. "We couldn't get flood insurance because we sit on the creek."

Mrs. Volker said freezers and perishable foods were moved into a trailer. "We may be operating out of the trailer before it's over," she said.

She said water was on the main floor of the mill, built in 1824, and there was fear the current would wash out the foundation. Another bridge across the creek was also being threatened, she said.

The bridge that was still standing, she said, "may not make it. If this rain picks up it may go too."

She said she could give no estimate of the many buildings along the creek were destroyed. "There were a lot of them," she said.

Other houses and bridges were also threatened in Old Appleton. Apple Creek has also washed across the U.S. 61 bridge in the town. The bridge is located only a few hundred yards from the lost bridge.

Several houses and sheds along the creek were nearly submerged this morning, with the creek continuing to rise as heavy rains hit the area. A mobile home park was also being threatened.

OLD APPLETON - A family dream to restore the 162-year-old McClain's Mill in Old Appleton was washed away by rain-swollen Apple Creek Friday morning.

The stone foundation of the three-story timber structure is all that remains after water 20 to 25 feet above normal level carried the entire mill off its foundation and downstream.

Its remains have not been found and no effort to replace it is expected, according to Jan Dellamano, whose father and mother purchased the mill in 1977.

A storage barn adjacent to the mill had been recently restored for about $50,000 and work on the mill was estimated at about $100,000.

Investigation of the bridge's historical value was completed in 1983, and documentation was all that remained for the mill to be listed on the National Register of Historic Places.

The project has been on hold since 1983. Dellamano joined with several area residents to restore the Old Appleton bridge, which has dismembered by a flood in December 1982.

"We put the bridge first because the mill, since it withstood that flood, was resonably safe," Dellamano noted. But no one could conceive the flood that overwhelmed the mill at about 5:30 a.m. Friday, he added.

Dellamano said watershed studies by the Army Corps of Engineers projected Apple Creek would attain a height of more than 20 feet above normal once every 200 years.

Friday's flood was unprecedented in both degree and damage, he said.

"It was kind of like a big ship, it just floated off," Dellamano said.

Damage from the December 1982 flood did not approach that destructive force. Dellamano said family members often have wondered whether they have hit a stretch of bad luck.

"You can sort of feel that nature is picking on you," he said. "But nature will do what it wants to."

Regarding restoration of the iron truss bridge, Dellamano said, "It wouldn't be unreasonable to go ahead with the project."

Dellamano is a member of the Old Appleton Bridge Restoration Committee and he said the group will meet June 6 to discuss the project.

Salvage operations were completed in 1983 and itemization of bridge components began two weeks ago. An engineer's cost estimate is expected soon, and feasibility will determine whether the bridge rises again, he said.

Read about the restoration of the bridge in this blog by James Baughn: