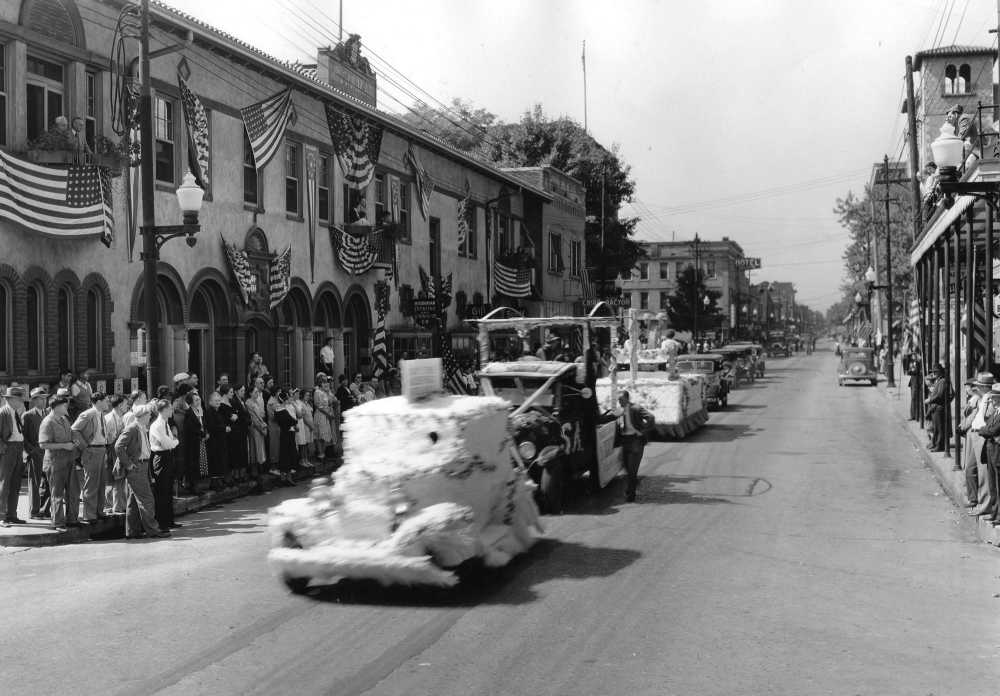 The Southeast Missourian commemorated its 30th anniversary with events that included a parade on Broadway that passed by the newspaper building on Oct. 5, 1934.

Cape Girardeau and county today auspiciously celebrated its school day part of the city's celebration by staging perhaps the longest parade ever witnessed here as 5000 public and parochial school children from the city and county passed in review before a crowd of thousands lining the streets.

The parade, approximately 2 miles in length, contained 312 vehicles of various sorts, including 34 floats, 23 of which were furnished by rural schools from over the county. There were 32 bicycles in the parade. Many of the schools had a lengthy procession, May Greene School of the city having exactly 50 cars in line.

A crowd of between 7000 and 8000 witnessed the procession, which moved from the assembling points on Pacific and Benton streets on either side of Central High School, to Good Hope street, and thence over Spanish street, Independence street, Main street, Broadway and returning to Central to disband.

Among the spectators were hundreds of out-of-town persons who accompanied school children here and also by many who came here for The Missourian's anniversary celebration. Fifty minutes were required for the parade to pass a given point.

The event was the first of three on the day's program, which will conclude the celebration. At Houck Field Stadium thousands more assembled this afternoon to witness a program given by the schools of the city and county. Tonight at 7:30 o'clock the largest crowd that ever witnesses a football game in Southeast Missouri will jam Houck Field Stadium to see the renewal of the traditional rivalry between State College and the Maroons of Carbondale, Ill.

Most of the 73 school districts of the county had floats or decorated automobiles in the parade, according to County Supt. of Schools Otto Kiehne. Some of the districts are large, and have two or three buildings, there being 94 public school buildings in the county.

School Day's big parade was headed by the snappy Central High School Band, which was followed by the Tigerettes, the girls' pep squad of the school. The Broadway and Franklin schools with floats and automobiles came next in line, followed by Jefferson, May Greene and Washington schools and the Central High School Girls Drum and Bugle Corps. Then came the John S. Cobb school for Negroes drum corps and uniformed pupils, followed by Trinity Lutheran Parochial school, St. Vincent's school and the State College Band and Training School. The Municipal Band completed completed the city's part of the parade.

The county schools followed the city schools. One of the features was a municipal touch added by the big new fire truck operated by Fire Chief G.D. Franch and Drillmaster Roy Smith. Fire prevention was stressed in banners on the truck.

Prior to the parade school officials called on patrons to furnish automobiles to transport the pupils. The response was so generous that but few pupils were unable to ride. Classes were held at the school until near parade time and then the pupils were taken in automobiles to the assembly point. 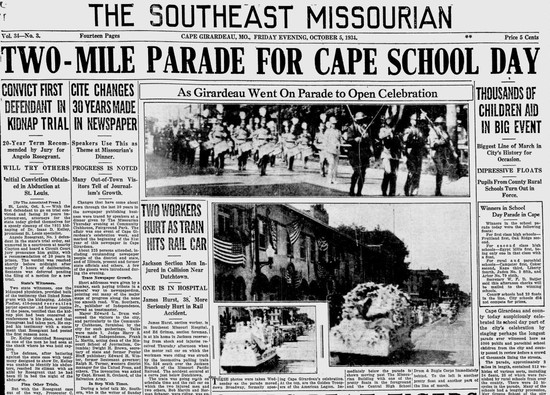