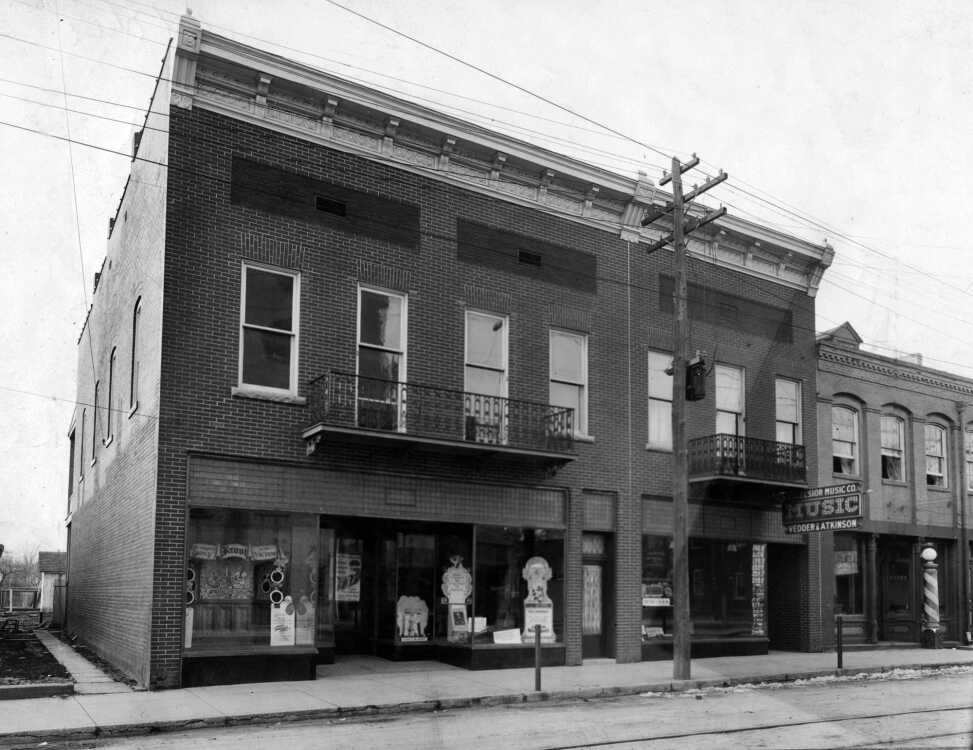 The Excelsior Music Co. is shown, circa 1914, at 433 Broadway in the Rabich Building. The business was started in this building by William H. Vedder and John Atkisson. In 1924 Vedder built his own store at 313 Broadway. Later he moved the business to 533-535 Broadway, the present location of Shivelbine's Music Store.

The Excelsior Music Company, located at 313-315 Broadway, is conducted as a partnership between William H. Vedder and William A. Huebel, having been under this ownership since 1920. It was established in May, 1906, by William H. Vedder and John Atkinson, continuing as a partnership for six years. In 1912 Mr. Vedder bought the interest of his partner and conducted business alone until 1920, when he sold half interest to Mr. Huebel.

The Excelsior Music Company carries a large stock of pianos, both regular and player, in several of the leading makes. It specializes in the Edison phonograph, keeping a number of models on hand. It also keeps a few band instruments in stock, but can supply any instrument wanted. Violins, guitars, ukeleles and numerous small instruments are in stock, with a full line of classical and popular sheet music, player piano rolls, and photograph records. The company also keeps a complete line of radio sets and parts. The concern is one of leading music houses in Southeast Missouri and enjoys a patronage from a large section.

This company was established and incorporated as the Brinkopf Furniture Company in 1916 and was operated under that name and management until April, 1926, when the name was changed and the Excelsior Furniture & Music Company established was a corporation with a capital stock of $12,000,000. The change was brought about when Wm. H. Vedder, W.A. Huebel and H.B. Kimmich purchased the interests of the original corporation and formed a new one consolidating the Excelsior Music Company....

Below is a present view of the building. The building to the left was built in 1935 for Lueders Studio at 427 Broadway. 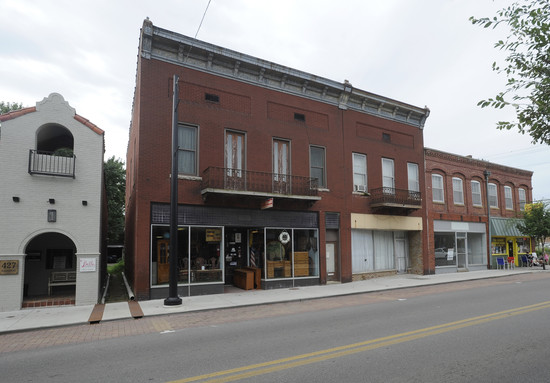 Here are some items from Out of the Past:

Feb. 4, 1913 William Vedder and John Atkinson, proprietors of the Excelsior Music store on Broadway, are ready to dedicate their new place of business tomorrow; they have moved into new quarters one door west of the old stand.

Aug. 24, 1934 Purchase of the Excelsior Furniture & Music Co., 533 Broadway, by a newly organized corporation of five men is announced; the deal provides that Charles W. and E.J. Bauerle, Henry Kimmich, Robert Bauer and William Vedder take over all of the assets of the firm; the interest of William Heubel was purchased outright, and most of the stock owned by Vedder was absorbed in the purchase.

Dec. 8, 1934 William Vedder, until August co-owner and manager of Excelsior Music and Furniture store, has purchased and taken charge of the Frigidaire and washer sales establishment at 418 Broadway; the business was purchased from A.P. Rueseler, who had operated it since last February.

May 26, 1944 Excelsior Furniture and Music Co. has purchased adjoining building at corner of Broadway and Frederick, occupied on first floor by Sinter Sewing Machine Co. and on second and third floors by apartment from E.G. Gramling.

May 4, 1947 Formal opening of reconstructed Excelsior Furniture & Music Co. store, 533 Broadway, will be held in about two weeks, exact date not having been set; project has been under way about 14 months, and included complete rebuilding of three upper floors and basement of building; when finally completed, store will have basement floor and two upper sales floors and third floor warehouse; head of firm is C.W. Bauerle.

July 2, 1953 C.W. Bauerle of Excelsior Furniture & Music Co. announces sale of retail furniture business at 533-37 Broadway by himself, his wife and Arthur R. Folsom to new company composed of local business men and headed by Dean McNeil; Bauerle's firm retains title to building, on which new company has signed long-term lease with options. 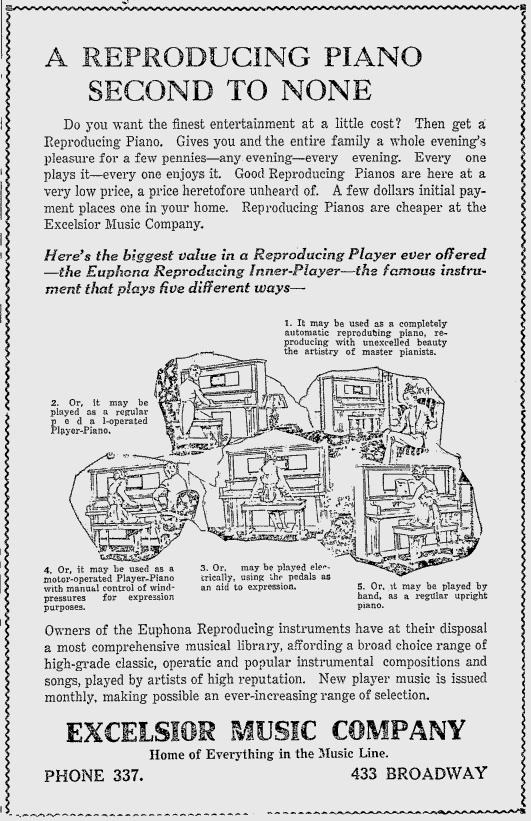