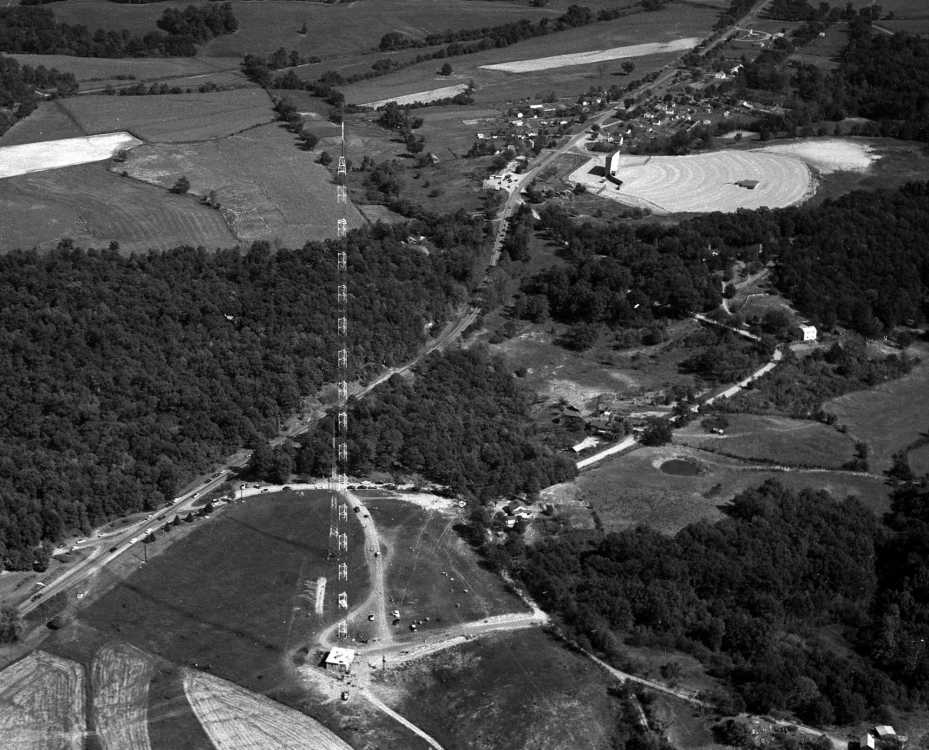 Oscar C. Hirsch founded KFVS Radio in 1925, broadcasting from a studio in his Cape Girardeau home. On Oct. 3, 1954, Hirsch began television broadcasting with KFVS-TV on Channel 12. The signal was transmitted from a tower along Highway 61 at the north edge of Cape Girardeau. G.D. Fronabarger made this aerial photo of the tower located on what was known as KFVS Hill, near the original KFVS Radio tower. That small tower with the call letters attached is still a local landmark.

In 1960, KFVS-TV moved its transmission to a new tower near Oriole, Missouri which at the time was the world's tallest man-made structure in the world, "towering 2,000 feet above average terrain."

The Star Vue Drive-In Theater is seen in the upper right corner of the photo.

Cape Girardeau's second radiocasting station is to be "on the air" tonight.

Station KFVS of the Cape Girardeau Battery Station at 312 South Frederick street will be given its first test at 7 o'clock tonight, Oscar Hirsch, manager of the station, announced.

Only a short program, probably of less than two hours length, will be given tonight and it is Hirsch's intention to make all programs short so as not to interfere with local long distance receiving.

The station, which was recently inspected and approved by the government and Hirsch awarded a license to operate, has been assembled by Hirsch. It is operated by 50-watt storage batteries, with 1000 volts capacity, and under favorable conditions should be heard in a radius of at least 300 miles. It operates on a 224-meter wave length.

Hirsch plans to have a formal opening at a later date when the public will be invited to inspect the plant.

The first radiocast in Cape Girardeau began March 28, 1923 by WSAB at Southeast Missouri State Teachers College. It was heard at 833 on the radio dial. The initial program was a lecture by Dr. Joseph A. Serena, president of the college, from the station located in the physics department of Science Hall. During that first 10-minute broadcast, Serena urged that all high schools in the area be equipped with receiving sets. In addition to educational and health lectures, various musical programs would be broadcast as well as messages regarding weather and markets if desirable.

After the first year of broadcasting, the FCC did not renew the license for WSAB. Many colleges in the country and others were broadcasting on the same wavelength of 360 meters, or 833 kHz. The FCC eventually eliminated that frequency for broadcasting.

The initial program of KFVS, broadcasting station of the Cape Girardeau Battery station, was heard more than 370 miles away, according to messages received by Oscar Hirsch, manager of the station.

R.R. Oehler of Clarinda, Iowa, sent a congratulatory message reporting that "I heard your program. It came in swell."

Considering that it is only a 50-watt station and that it was operated the opening night under conditions which were very unfavorable, the range of the station is much greater than first thought. In winter and under more favorable conditions, it is expected to be heard a greater distance.

The second program is to be radiocast by the station Wednesday night at 7 o'clock, "Peg" Meyer's orchestra to play.

Music of the new Kilgen organ, now being installed at the New Broadway theater, will be radiocast by the Hirsch broadcasting station, KFVS, direct from the theater next week, when the organ is to be used for the first time.

Monday night is to be the first program at which the instrument will be heard, the music and show to start at 7:15, the usual time. The programs will be broadcast for four nights and possibly all week, giving radio "fans" of this section an opportunity to hear the special music even though they can not be present at the theater.

The Hirsch station had a number of telephone calls from persons this morning, who heard the program Thursday night. Calls came in from Jackson and Burfordsville saying the program was enjoyed, and it is expected that word will be forthcoming from distant listeners, in the mail. The program last night consisted of a library talk by Miss Lenora Rafferty and more than a dozen musical numbers by the Troubadours, a group of local musicians. Dr. Jean Ruff did the announcing.

KFVS Radio began on a wavelength of 224 meters which was 1340 on the radio dial.

Peg Meyer's dance orchestra was known as the Melody Kings.

Read more about the history of KFVS in this story published Oct. 1, 2004:

Read about Oscar Hirsch in this story by Callie Clark.