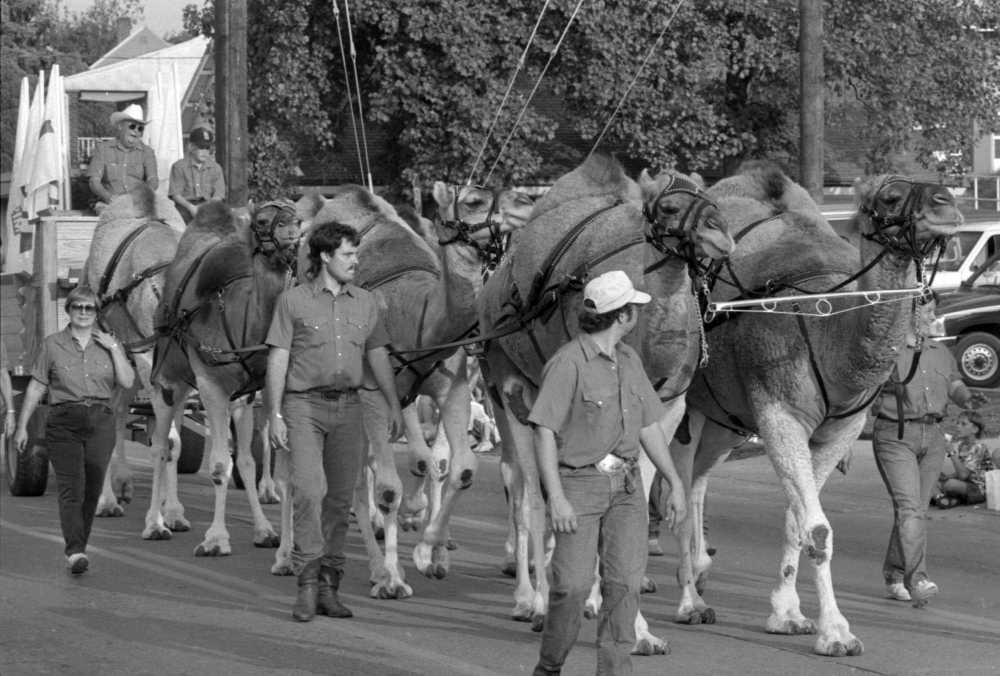 Dave Hale drives his eight-camel dromedary hitch on Broadway from Capaha Park to Arena Park in the SEMO District Fair parade on Sept. 14, 1992. Below, Hale has the camels on display at the fair. (Fred Lynch photos) 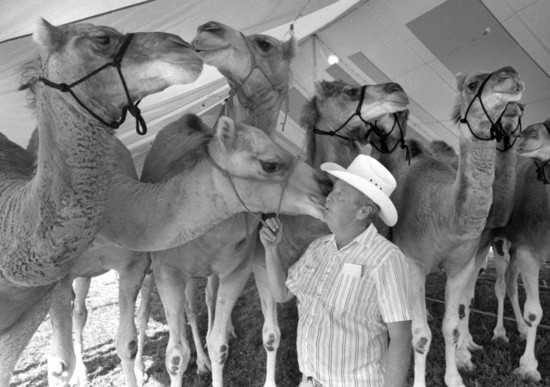 The SEMO District Fair has a new attraction this year, one made up of eight "big babies" who look the same to newcomers but have distinct personalities, says their owner, David Hale.

"They don't look anything alike," said Hale of his camels that make up the world's only dromedary hitch.

They tour the United States and act as "extras" in movies, but they still have time to chauffeur kids around Hale's 5-H ranch just outside of Cape Girardeau.

The camels will be featured in today's Fair parade, which starts at 5:30 p.m. at Capaha Park.

Hale said the animals--at more than seven feet tall and weighing more than a ton each--may seem intimidating. But they're actually harmless pushovers.

"Once they find out you don't want to hurt them and you reward them for the good things they do, they're your friend for life," he said.

Hale raised the eight camels he's showcasing at the fair all this week. He's got 28 more at his ranch, he said.

"They're intelligent. They know their names, and they understand what I'm saying," said Hale as he sat nearby the tent housing the camels during the Fair. Each day of the Fair, the camels will be hitched up and taken around the fairgrounds. Visitors to the Fair seemed to gather around the tent Sunday afternoon for their look at the regal creatures.

Hale said the camels are gentle and kids seem to love them. Put a saddle on one of them, and up to four kids at a time can ride, he said.

"There is something about a camel," he said. "A child will ride one when they wouldn't consider riding a pony."

The hitch is made up of Pete and Joe--the leaders--followed by Jack, Charlie, Jess, Tom, Sammy and Louie.

Hale said camels are the second oldest domesticated animal in the world next to chickens. But they are much smarter, he said.

"They all have different personalities," he said.

Hale has been raising camels and other exotic animals at his ranch for 20 years. The eight camels that make up the hitch have traveled as far as Hawaii (by boat) and later this month will journey to Arizona to film another movie.

Hale said the movie parts are not really profitable. "We just do it because it's fun," he said.

In early October the camels will be showcased in a parade at Walt Disney World in Florida.

Hale said raising camels isn't hard; in fact, he prefers them to most other animals.