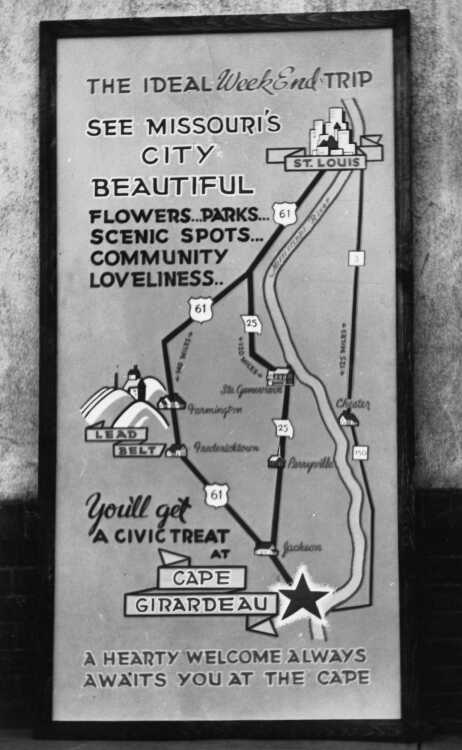 It takes years to accomplish big things. Cape Girardeau has devoted 20 years to the task of making this the City Beautiful and the work has fairly started.

The late Dr. W.C. Patton, while mayor, was entitled to credit for the first city beautiful step. At the insistence of a group of women headed by Mrs. Josephine McGee, then a prominent civic leader, Mayor Patton had an "anti-spitting" ordinance adopted and had the police stop men from spitting on the sidewalks. In those days women wore long skirts and they could hardly walk along the streets on Saturdays because of the tobacco spit on the sidewalks. Mayor Patton stopped the practice so successfully that the women decided other things could be accomplished.

Flowers in Every Yard

From that day to this interest in city beautiful work has progressed. The Civic Improvement Association, long headed by Mrs. E.G. Gramling and Mrs. L.G. Pott, aided by a loyal band of women, handsome a remarkable work. They improved the parklets surrounding the Frisco depot and thousands of shrubs have been set out through their activities. There has been no end to the work done by these women and for years Cape Girardeau has been able to boast, without fear of contradiction, that flowers grow in every yard in the city, excepting none.

The Missourian helped do pioneering in this work. In 1909 it developed the first individual beauty spot in Cape Girardeau. Borrowing the vacant lot adjacent to its building, which is now occupied by the Park theater building, it cleared off the weeds and rubbish and developed a large, circular flower bed, with a border of foliage along the lot lines. The rear of the yard then contained a large tree and some very tall reeds that made a beautiful background. A picture of this development can be seen in the Photogravure section.

This first beauty spot attracted so much favorable comment that a second development was made in the rubbish yard that now holds the Harris Motor buildings opposite the newspaper building.

The following year the Civic Improvement Association had about 30 such places throughout the city.

The generous approval received on the beautification of the vacant lot caused the publishers of the paper to buy the lot and erect on it a picture show building that was then a beauty. At that time the other picture shows were in store rooms that were fire-traps and unsanitary. The opening of the modern picture house caused a sensation and immediately the other houses had to clean up and improve.

The success of these efforts so enthused the publishers that in 1916 they published their first supplement in colors. It was a 4-page paper that would now be called a Photogravure section, but in those days such sections were called supplements.

It contained a color-print of the original beauty spot, and a number of other attractive places about town. Also it had an example of tree butchery as was generally practiced, showing some trees that had been trimmed properly and some that had been butchered. Since then tree butchery has gone out of style.

Got a Better Depot

As the Frisco had contracted to erect a new passenger station, a model was published in the supplement, being the new depot at Elmira, N.Y. It was chosen by Edgar O. Dunn, editor of Railway Age, as the most attractive and serviceable small city depot he knew of. When the Frisco started on a new depot this picture was used to good effect. The Frisco presented a plan of a stucco shed that resembled a string of box cars and possibly, if it had not been for the showing of the Elmira depot, no one would have cared what kind of a depot was erected. The town didn't get the depot it wanted, but the Frisco was prevented from building the shed and the new depot is a credit to both the railroad and Cape Girardeau.

The entrance to the new traffic bridge, shown in the Photogravure section, and sources of other developments throughout the city can be traced to the activites of the civic workers.

In conducting city beautiful campaign this spring, it has been suggested to ladies of Civic Improvement Association that instead of usual corner lots being planted with flowers and many vacant lots around town transformed into flower gardens, they urge those who are interested to make them over into potato patches or other vegetable plots.