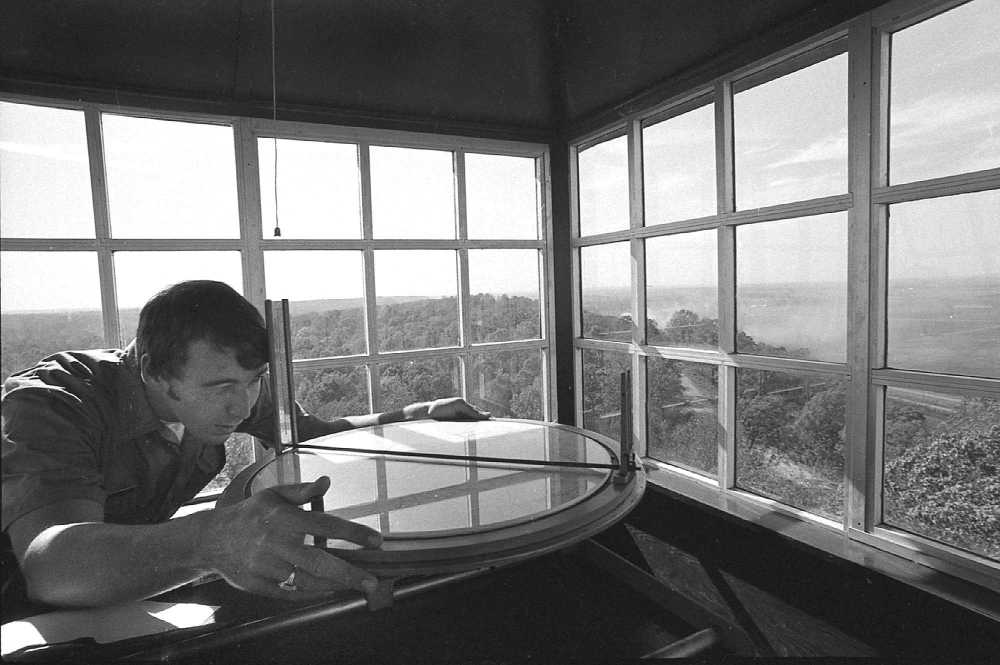 Forestry aide Kent Verhines makes a practice sighting in Tywappity fire tower 87 feet above the ground. Chaffee is in the background. The fire tower is presently being manned by forestry aides of the Missouri Department of Conservation because of the high fire risk. (Stephen Robertson photo)

The tower no longer exists. Read more about Tywappity Lake and Tywappity Towersite in a column by Rocky Hayes below. 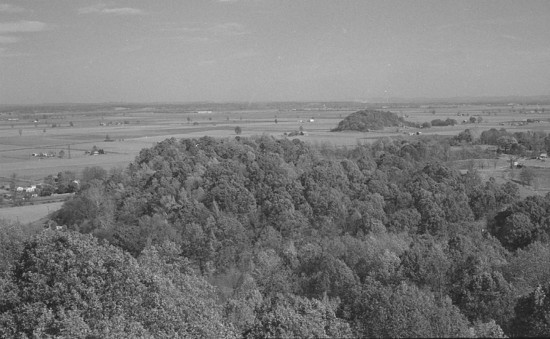 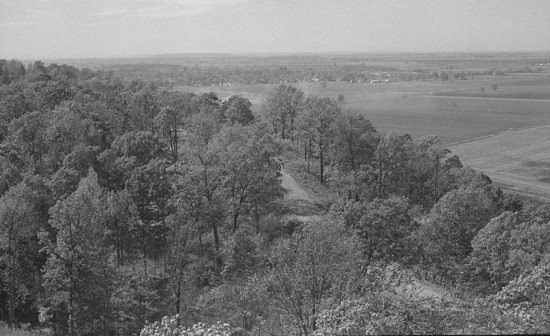 Tywappity is fun to say, visit

Tucked away in the rugged hills of northern Scott County Missouri, just outside the City of Chaffee, lies a pair of small but intriguing conservation areas.

Tywappity Community Lake and Tywappity Towersite, although separate areas with distinct management objectives and regulations, complement each other and offer much to those who venture there.

Tywappity Community Lake is a 120-acre area which has a scenic 37-acre lake surrounded by 83 acres of forest. Tywappity Towersite has an additional 64 acres of forest. These two small areas may be diminutive in stature but are rich in natural wonders, history, and recreational opportunities.

The mystique of these areas first begins with the tongue tingling name "Tywappity." Although its exact origin is somewhat speculative, the name Tywappity is most likely derived from the name given to a tribe of Native Americans living in the region when settled by Anglo-Europeans.

Historical records show the name Tywappity first appeared in 1793 when Cape Girardeau was designated a judicial district whose boundary on the south was referenced as the Tywappity Bottoms.

In 1797, French explorer Collot journeyed up the Mississippi River keeping a journal of his travels. Collot made reference to the Tywappity Indians living in an area he called the Tywappity Mountains, the hilly northern part of present day Scott County.

Six years later in 1803 when Lewis and Clark also traveled up the Mississippi River on their famous expedition to explore the newly purchased Louisiana Territory, they noted in their journals settlers living in an area referred to as the Tywappity Bottoms. This area was about 22 miles north of the confluence of the Ohio and Mississippi Rivers in what is today Scott County Missouri.

The Tywappity Towersite was purchased in 1968 and a fire tower was constructed shortly after for forest fire detection. The tower has since been removed as the incidence of fire in the area dropped significantly and the tower no longer served its original purpose.

As an added bonus, Towersite affords one of the best scenic views in the area. From the highest point on the property where the fire tower used to stand, one can look north and west for several miles out over the old Mississippi River floodplain and only wonder what this area must have looked like when early explorers first gazed upon Tywappity.

Tywappity Community Lake and Towersite can be reached by taking state Highway A east from Chaffee to state Highway RA. Travel about 1.5 miles to the end of RA and you're there.