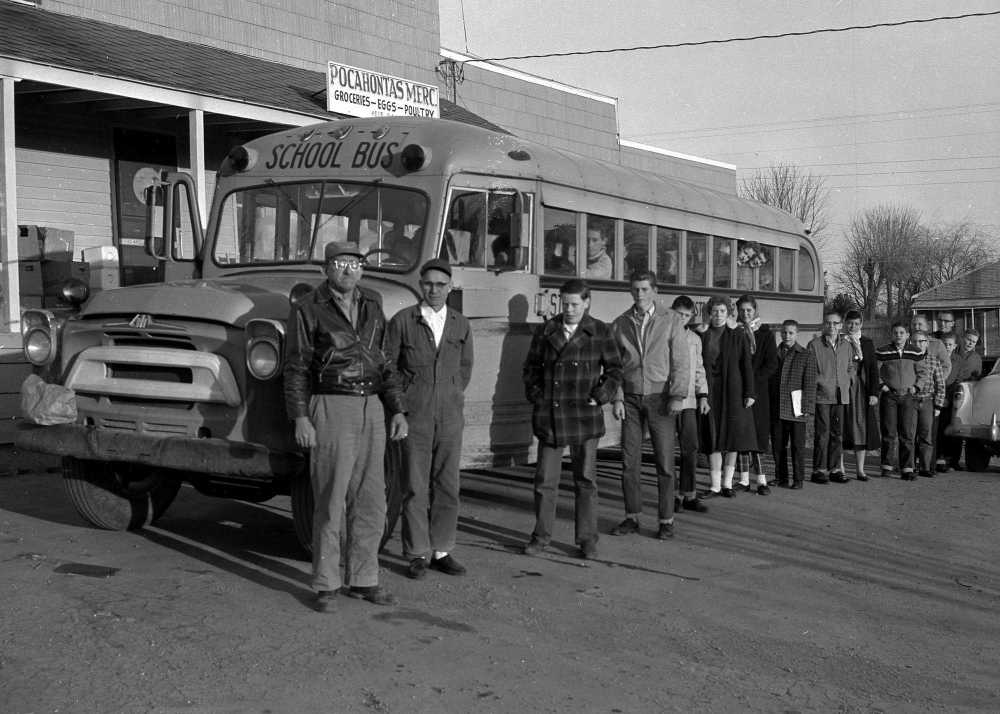 Herb Rauh and Bill McCain, at left, drivers for the Jackson R-2 School District, and their young passengers. The boys and girls are ready for the last lap of their morning ride to school. Some of the group boarded the bus earlier as it made its rounds of the back roads; others get on in downtown Pocahontas. Another group of children were let out earlier at the Public Grade School in another part of town. (G.D. Fronabarger photo)

The bus stopped outside Pocahontas Mercantile.

Joining "other youngsters" on an early morning school bus ride on a typical rural route proved an interesting and enlightening experience. Some observations of that hour and a quarter's ride prompted this story.

The man behind the wheel of a school bus is a mighty important fellow. The lives of a bus load of children depend on his driving ability, accuracy, patience, foresight and personal judgment.

His day begins early, before some of his riders are out of bed. It's dark when he warms up the bus motor. Some mornings fog and mist hamper his driving. Other days bring snow, sleet or rain (sometimes all three) to tax driving skill and patience.

The weather that misty January morning was far from ideal. Mist and fog greeted us as we boarded the bus a little before 7 a.m. The bus was already warm as the driver runs the motor to pre-warm it for his passengers.

Before pulling out, driver Herb Rauh explained some of the gadgets on the dash of the long 66-passenger bus. The giant-sized windshield wipers began their rhythmic clicking; the two heaters began putting out; it was time to start. This driver, like a good many others driving for R-2 School District, finds it necessary to keep to a strict time schedule--leaving on the minute and hustling along the route to pick up the waiting children.

Most drivers know their route well, and can greet each child by name as the pupil hops on the bus.

"First we get Jimmie," Mr. Rauh said. Minutes later a second grader with his reader in hand scrambled aboard.

The next child on his roster (each day the driver must check out his passenger list) had telephoned ahead from home to report she couldn't go to school that day. Drivers are grateful for these advance tips as it eliminates them having to honk and wonder, waiting sometimes three minutes before getting a signal to go on, or getting no signal at all.

On around the curvy route, from farm to farm, the bus wound its way. The driver picked up the Brunke children, Sides brothers and sisters, the Hodge youngsters, Mizells, Crafts, Putz, Hitchcock, Gohn, Allen, Phillips, Cathcart and Hahs. He made stops for the Bray children, Dickersons, Wiggins, McCains, a Harper girl, a Davis boy, two Koeberl children, the Ruehling youngsters, a Petzoldt boy and the Finchums' daughter.

Most of the children were waiting when the bus rounded their curve. Even in the rain some were right there, ready to board. Others watched from their doors if the houses were not too far from the road.

Going "to school" the passengers are well behaved--most of them. After school it is a different story sometimes. Bottled-up energy, uncapped on the homeward run, puts a driver's patience and driving ability to a real test. In addition to driving he must know how to handle children, ages 6 to 18 and a quantity of them--in some cases as many as 66 boys and girls.

When a mother waves goodbye to her child in the morning, that child becomes the driver's responsibility until he deposits him at school. The driver may, if necessary, exercise disciplinary authority. The parents' farewell signal is the last touch with her child until the driver brings him home in the late afternoon. A good driver knows and feels this serious responsibility, and feeling it, he emerges a better, more conscientious driver.

Maneuvering a 32-foot bus over county roads takes nerve and a good deal of "know how." Some turns on this route are tricky. There are numerous blind curves and a generous supply of hills. Often termed the "scenic route," this run covers the roads from Pocahontas east to Neelys.

At points along the way the view from the high bluffs is breath-taking, revealing a panorama of ponds, farm houses, animals and rich colored growing grains.

Caution is a word a good driver knows and practices, not once in a while, but at all times. At every turn and blind curve they are to sound their horn loud and long. At every stop they must put up the STOP arm to halt traffic from behind.

The reason for sounding the horn on a blind curve became most evident to driver Rauh one afternoon. When making his return run he came upon a farmer on a hay baler. The horn signal helped move the farmer over in a hurry.

Between 20 and 30 miles per hour is good driving on these gravel roads. Often roads are muddy from washouts. In addition to hills and curves, there are narrow wooden bridges and some rocky creek beds to cross. A good driver knows his route well--every curve and creek in it. He has pre-planned the run, makes detours where necessary and knows just where to make his turnarounds.

"It takes room to turn these babies around," Mr. Rauh commented as he made his last turn around before heading back to Pocahontas.

Last pick-up that morning was Raymond Petzoldt. The bus rolled on its way, and before bell time pulled up to the Pocahontas Public School, where elementary age children ended their ride. Then the bus circled around to the town square, meeting another route bus driven by Bill McCain. Joined by high school age girls and boys from Pocahontas, passengers from both buses quickly fill the larger bus for the last lap of the trip into Jackson High.

A bus driver can expect almost anything from his youthful passengers. Recently a first grade boy walked the length of the bus to issue his complaint to the driver: "These girls make me nervous."

Another "would-be" helpful, a little girl, put her small hand right in front of the driver's face, excitedly exclaiming: "Lookie, I found a screw."

A driver also tells of a boy who became ill at school, rode the bus home without any mishap, but that night was hospitalized for an appendectomy.

While riding the "scenic route" this reporter noticed that at the Bray parsonage in the New Bethel area, the minister backed his car over a creek branch right up to the bus door. This morning chore keeps his children from wading water, the driver explained. However, one morning recently when the Rev. Bray was away from home, a woman neighbor befriended the family by donning hip boots and carting the children across the water "piggy back" style.

The Jackson R-2 bus transportation system, now in its sixth year of operation, has an enviable safety record, as well as one of the lowest cost per pupil rates ($4.45 on a monthly basis) in the state.

Twenty-two drivers travel close to 1000 miles each school day over the large district, extending over nearly two-thirds of Cape County.

The district is served by its own 23 buses, five of which are the "biggies" or the 66 passenger machines. The buses are kept in good running order by a full-time mechanic at the district-owned garage.

There are 1250 children who ride the buses daily, coming from as far south as the Dutchtown road, from Neely's to the east, west to the Bollinger County line and north to the Perry County line.

Before school buses, country youngsters walked to school. Some of the drivers now serving the rural areas today are of the "walk to school" generation. A three mile walk, cross country, was not unusual for them, but was more "the usual" in their school days. Recalling freezing weather and frost bitten toes, these men know the real value of a bus ride to school.