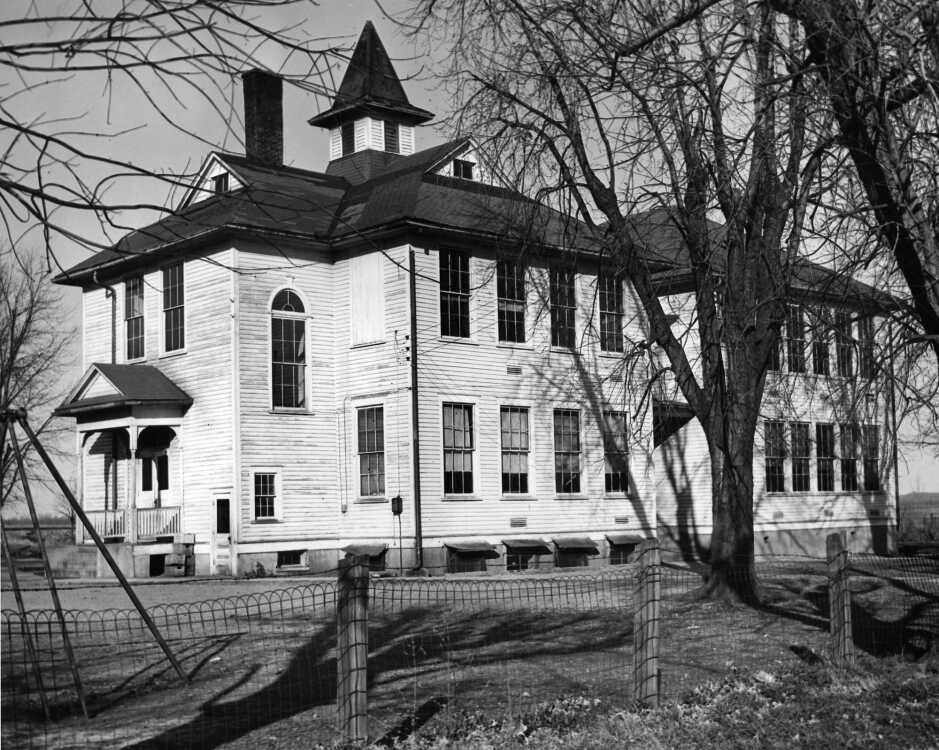 This old grade school building at McClure, Ill., abandoned for the community's school purposes, is now being used by elementary pupils from Thebes while their new building, replacing one destroyed early in the year by fire, is under construction. The elementary school pupils at McClure are now housed in the community high school building at the west edge of town, and high school pupils are being transported daily to the new district high school near Wolf Lake, which was erected to serve the consolidated districts of several communities. (G.D. Fronabarger photo)

The old frame grade school at McClure, Ill., was leveled by fire that broke out about 10 a.m. today, but all 153 of the pupils in the building marched out in orderly fashion before the flames had gained much headway.

The school was being used by the Thebes district, the building of which was destroyed by fire in August.

Acting Principal James Baugher said he believes the fire started from a clogged flue. He related that the janitor, Clarence Jacobs, could not get the building heated up very well this morning, and when the school cafeteria cooks came in they found a fluestop had blown out in the basement. Mr. Jacobs replaced it, Mr. Baugher stated.

The fire was first discovered in the bell tower atop the two-story building by a woman passerby who hurried into the building to spread the alarm. The children were all herded outside, but some of the older pupils went back in to save some books and coats, over the protests of the principal, Mr. Baugher reported. Several cases of new books, three clocks, two desks, two tables, a filing cabinet and several chairs were carried across the road to safety.

The Cape Girardeau and Tamms fire departments were called to battle the flames. The Cape firefighters were helping to get the blaze under control when its water tank was emptied. The fire got out of hand while the supply was being replenished. The Anna, Ill. fire department arrived after the building was nearly destroyed.

The flames, inferno hot, were fanned by a stiff northwest wind. Ancient maple trees on the south side of the building were licked by the fire, and dead center sections, where they had been cut back, caught fire and burned through the morning....

The building was constructed in 1904, according to Herman Bunch, who was a member of the school board at that time. An addition was made to the building several years later. It is now owned by the Shawnee consolidated district. Thebes district carried insurance on the building. Frank Marchildon, treasurer of the Shawnee district, said it would cost about $75,000 to rebuild, but he did not know how much insurance was in effect.

The school had been abandoned when the McClure high school was consolidated at Shawnee and the grade school moved to the old high school. It would have been disposed of had not the Thebes district needed it, Mr. Marchildon said.

McClure is about seven miles north of Thebes, the children having been transported there daily by bus. A bond issue was passed last month by the Thebes-Olive Branch districts for the rebuilding of a high school and grade school at Thebes.