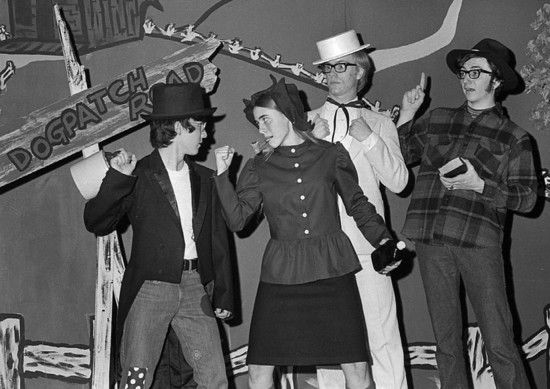 Rehearsing some of the antics that make up the Central production of "L'il Abner," Mammy Yokum seems prepared to land a punch on her husband, Pappy Yokum. From left, are Forrest Shirley as Pappy Yokum, Miss Chris Wittich as Mammy Yokum, Peter Kinder as Sen. Jack S. Phogbound and Joe Penrod as Marryin' Sam.

Central musical, "L'il Abner," to be presented next week (excerpt)

Andy Capp's comic characters from Dogpatch, U.S.A. will sing and dance next week in the Central production of the musical "L'il Abner." The presentation will culminate nearly three months hard work by over 100 pupils and teachers....

Since rehearsal began, the pupils have evolved into what co-director Judy Williams describes as "one of the most cooperative and organized groups of pupils I've ever worked with."

Jerry Witvoet, the other co-director, says that with 70 persons in the cast, "L'il Abner" is "more difficult than many musicals but is more fun for the students because each part is important."

Forrest Shirley, who plays the part of Pappy Yokum, describes his role as one of "letting mammy boss me around a lot." His counterpart, Mammy Yokum, played by Miss Chris Wittich, has last minute apprehensions. She says, "Act II is hard for me and my hubby. In it I'm supposed to be hysterical...but I'm not too cool." She continues: "There was a lot of chaos in the beginning but now things are shaping up quickly."

Profits from the musical are going to be used to help pay for a recently installed $1,800 lighting system in the Central auditorium. Part of the profit is also earmarked to be used in purchasing a new sound system for the auditorium, something Mrs. Williams says has been needed for years.

Mrs. Williams notes that audiences who enjoyed "Bye Bye Birdie" five years ago will find the humor in "L'il Abner" to be of the same type. Chocked with what she terms "belly laughs," Mrs. Williams assures that "L'il Abner" is entertainment to be enjoyed by the entire family. 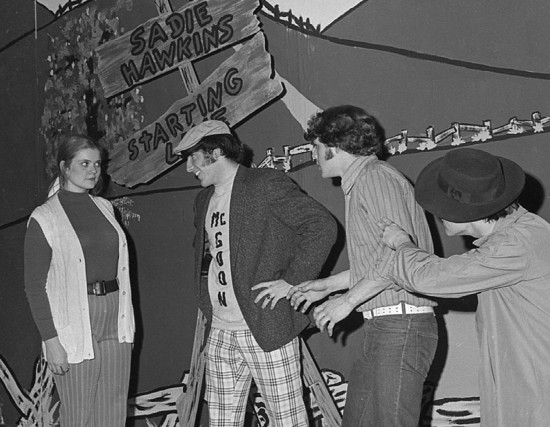 Captured in this photograph are the lead characters in "L'il Abner." They are Miss Cindy Nickless, at left, and Steve Palmer, second from right. They play the parts of Daisy Mae and L'il Abner. Doing his best to woo Daisy Mae is Earthquake McGoon, played by Craig Morgan. With his back to camera is Eagle Eye Fleagle played by Daryl Wagoner.