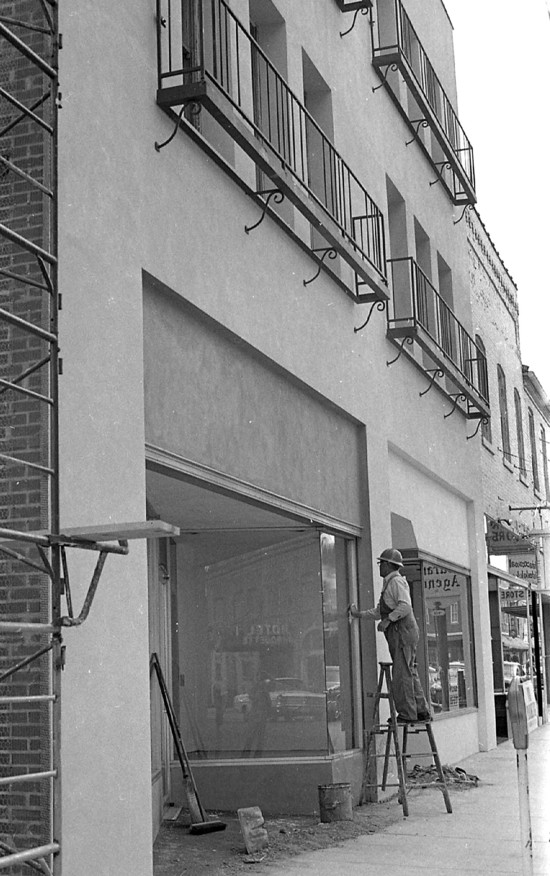 The Broadway side of the Idan-Ha property that is presently being renovated shows the early Southern French decor that will make the exterior of the old building a city show place. Clyde Elfrank cleans up following stucco work Friday. Burton J. Gerhardt Construction Co. hopes to have the building completed this summer. 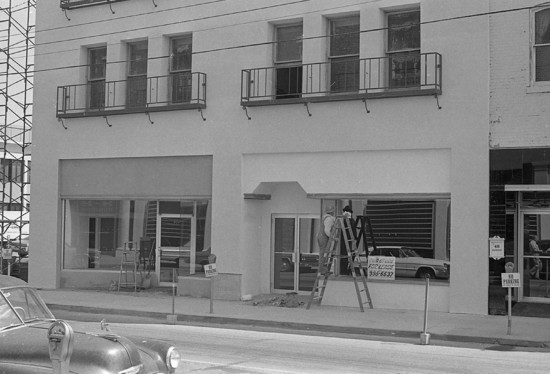 Resumption of work on the Idan-Ha Hotel property to the point where it is attracting considerable attention....

Southern French decor, highlighted by a stucco finish and wrought iron balconies and trim is turning the outside of the old Idan-Ha property into something to feast the eyes upon.

Burton J. Gerhardt Construction Co. completed the stucco finishing on the Broadway side of the building Friday. The company expects to have the Fountain side completed about midweek.

When it is complete, it will give the fountain and plaza a colorful backdrop against the early New Orleans design that is planned throughout the building. Predominant color of the exterior of the building is gray, with lesser amounts of rose.

The apartments--41 of them located on the Fountain side--will get the workers' attention next. They will be serviced by an elevator. A balcony extends from each of the three levels of the building that contains the apartments.

An inside courtyard, which is now complete, sets toward the center of the building. Chandeliers fashioned after the famous Biltmore Estate hang approximately 20 feet from the high courtyard ceiling and are offset by decorative wood decks. Plans are to have entries to several stores surrounding the indoor courtyard.

A ladies boutique shop will be the first business to open in the renovated building. Planned for opening June 1, it will be located in one of the two buildings facing Broadway. Facilities will be available for seven other businesses. Gerhardt officials anticipate completion in about four months.

Only approval of a special use permit for an apartment complex seems to stand in the way today for improvement of the eyesore Idan-Ha Hotel property.

By unanimous vote, the City Council Wednesday night accepted the proposal of the trustees of Montgomery Trust of Sikeston to settle disputes over condemnation of the buildings in order to sell the property to Burton J. Gerhardt of Cape Girardeau....

For the past two days, workers of the Gerhardt company have been filling and leveling dirt in the large hole, a previous basement area, of the building which stood nearest the southwest corner of North Fountain and Broadway.

Fire in 1968 destroyed the hotel. Some of the buildings were razed, others remained standing in a burned-out condition. Not only has the property been called unsightly, but is also deemed a health and safety hazard. The city and the owner of the hotel have been involved in a series of condemnation proceedings since its building supervisor first ordered the property repaired or demolished following a report of the building inspector.

The former Idan-Ha Hotel property, known as the A.C. Vasterling building, was renovated in 2014: