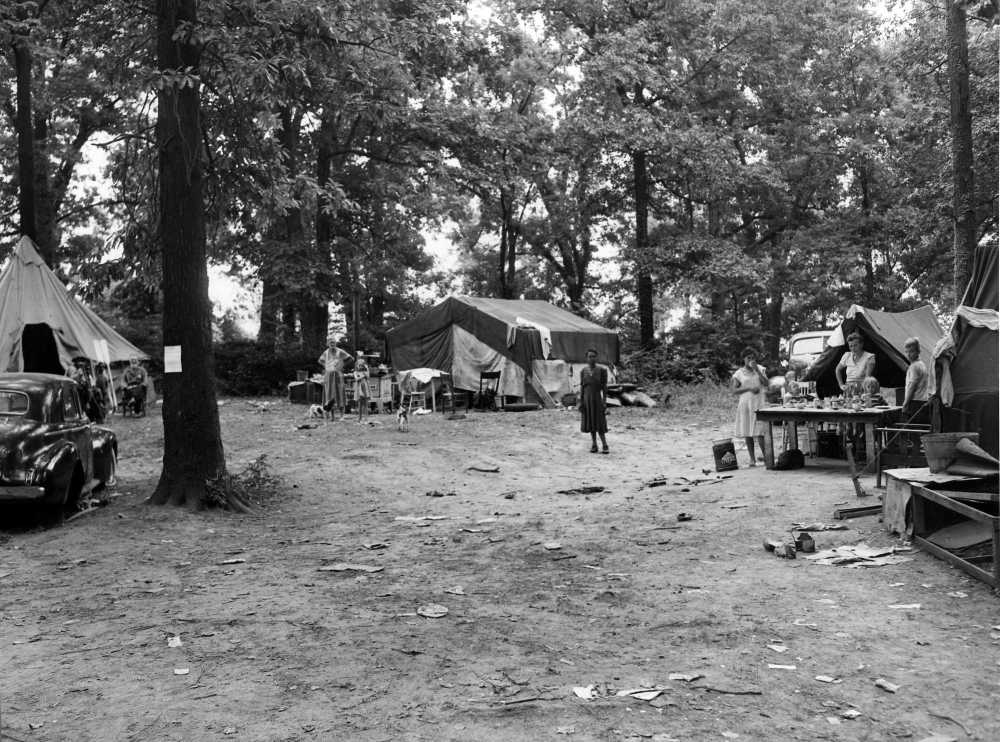 A tent community has grown in Houck Woods, occupied by families driven from their Smelterville shacks by the flood. More than a dozen families have borrowed or rented tents to live in temporarily. Two of the families declared they weren't going back to their former abode, while three others said they wouldn't if they could find some place else to live. Flies, attracted by food, and hordes of mosquitoes abounding in the dense woods, make living conditions unbearable.

Some Families May Not Return to Flood Area

Fewer Going Back to Smelterville as High Water Passes.

The trek back to Smelterville has begun. Flood water which has covered the blighted area between the Frisco railroad track embankment and the Mississippi River for more than three weeks is receding, leaving behind a stinking mass of silt, muck and scum.

Into the water-ravaged shacks--many of which were filled to the roof--families driven out more than three weeks ago are beginning to return.

It isn't a pretty picture, but rather a sorry plight and a blot on the community. It's hard to believe that residents of Cape Girardeau have to return after a flood to conditions such as these:

Shacks that have been floated off their foundations.

Mud and silt in the shanties several feet deep.

Only one water line and community faucet for the entire area.

No indication of any sanitary facilities.

A minister who has long had an interest in the area but requested that his name not be used told this reporter that he couldn't understand how people would be willing to live in such a place and under such conditions.

If there is any way at all to close that area it should be done, he said, and the city should prohibit anyone from living there in the future. "Before I'd live in such a place as that I would move out of town," he said.

The minister has long given thought to what could be done about the situation, and observed that many families would not be there if they had some other place to go.

After each flood the area, which is legally known as the Village of Girardeau, loses some of its families, but others move in, content with their lot in life and apparently unwilling to improve themselves.

The preacher said that some of the families expect the city to eventually help them out or provide the leadership that would find them a better location to live in.

On the west side of the railroad tracks conditions aren't so bad, he related, and if the track embankment could be raised just a little and flood gates put in at the trestles over the two creeks in the area the problem of flood water along South Sprigg street would be solved.

Except in low spots, flood water has left the area west of the tracks. Many residents and property owners along Sprigg street have spread lime over the ground and are now cleaning up their premises.

What will happen across the tracks is anybody's guess. A former resident said that only enough of the mud will be scooped out of the shacks so that a person can get in, and that the next time the river rises the water will come in over the silt left from the present flood.

Half of Families Back in Smelterville

Some half dozen families who set up housekeeping in tents in the woods at the top of tollgate hill on South Sprigg street returned Friday and Saturday. Police, at the request of the property owner, had served notice on these families to vacate the premises by last Saturday, telling them that the owner of the property had called attention to the danger of fire and the lack of water and sanitary facilities in the wooded tract.

One of these families returned to a former vacant place in the blighted area between the river and the Frisco railroad tracks. Their old house was practically destroyed by the water and a member of the family told a reporter that they didn't want to return to Smelterville and wouldn't have if they could have found any other place to move to.