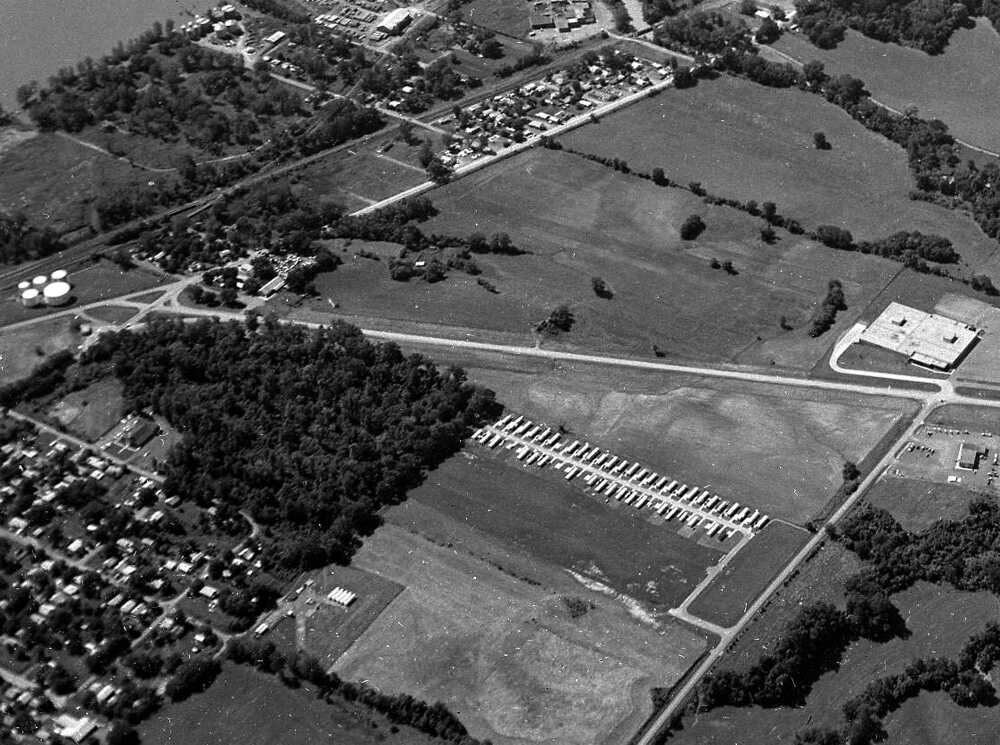 G.D. Fronabarger took these aerial photos of Houck Woods, the area of trees situated at the southwest corner of South Sprigg and Highway 74, now Southern Expressway, in Cape Girardeau. In the top photo, Smelterville is seen at the top of the photo. Florsheim Shoe Co. is at the right side, and the trailer court is seen to the east of South West End Boulevard.

Below are items from Out of the Past about Houck Woods. 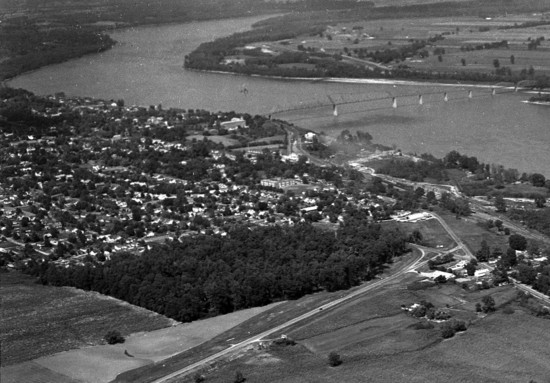 Residents of South Cape Girardeau, in what is known as Houck subdivision, are compelled to leave their homes shortly after noon and go down into vacant lots south of their homes to fight fire, which spreads rapidly over weeds and grass toward their homes; Houck Woods, just below residential district, catches fire about 11 a.m. and flames spread rapidly northward.

Work of clearing off the section of Houck Woods donated to the south end of the city for a park is soon to begin; contracts are signed; to be known as Giboney Park.

Red Cross plans basket dinner at Giboney Park, 13-acre tract of Houck Woods leased from Louis Houck until October 1923, for use as a park for citizens of the south part of the city; it is hoped the tract can be purchased.

Attempting to land on a rain-soaked wheat field in the southwest part of the city late yesterday, brothers Vernon and Rudy Miserez of West Point, Neb., escaped with only slight injuries, when the running gear of the plane bogged down in the mud; the pair was attempting to land in a field just west of Houck Woods on the LeFarth farm.

Fugitives from flooded areas of Smelterville suburb are residing in three temporary shelters provided by Red Cross; three tents have been erected in Houck Woods in south end of town, providing shelter for 28 families; other quarters are being provided at Link Trainer building at Municipal Airport, in which 11 families are living, and at Masonic Hall on Sprigg Street, where 14 Negro families are quartered temporarily; Red Cross has given aid to 29 other families.

Two of three shelters provided by Red Cross for residents of Smelterville suburb, forced to evacuate their homes early this month by high water, have been emptied; at shelter for Negroes, Masonic Hall on North Sprigg, all 14 families moved out themselves and with exception of three, the 11 families temporarily housed in Link Trainer Building at Municipal Airport moved their own belongings; the three families were moved to Houck Woods by Red Cross.

Plight of persons living in flooded areas of Cape Girardeau grows steadily worse as more and more families are forced to move from homes due to river water; area most affected is low-lying Smelterville section; number of families, with nowhere else to go, have set up tents in Houck Woods.

Acting at request of owner, police urge remaining five families evacuated from Smelterville during flood to leave Houck Woods in South Cape Girardeau and return to their homes by Saturday; Chief of Police William Mills goes to refugees at request of owner, who earlier made personal plea to families living in tents to leave.