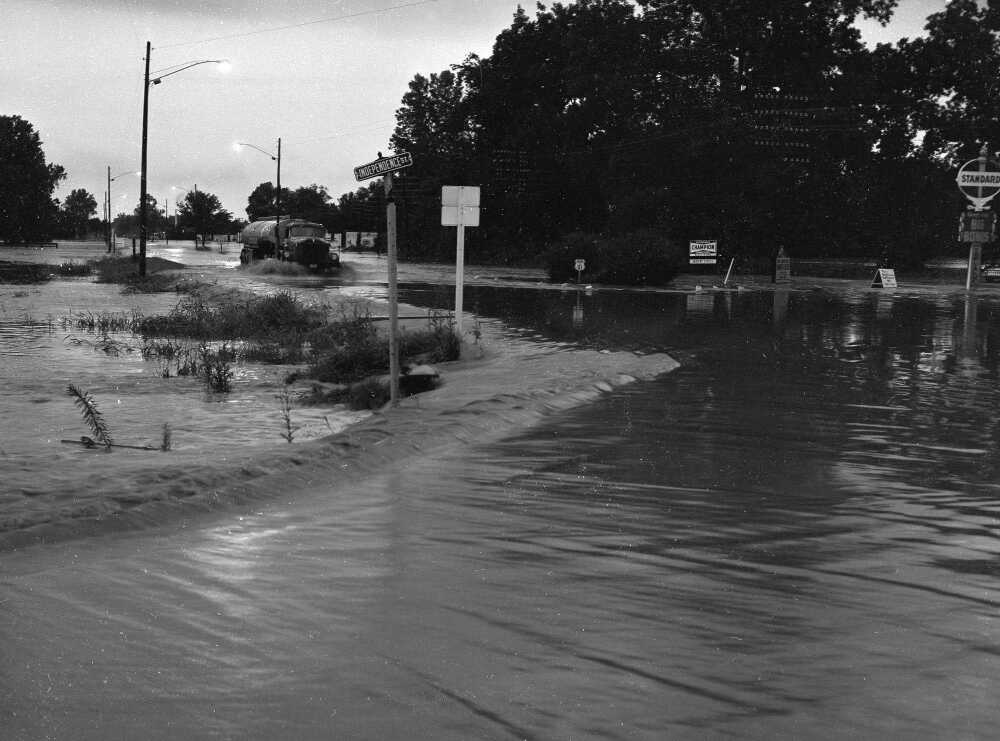 This picture taken by G.D. Fronabarger shows a flooded Kingshighway just south of Independence. It was published July 17, 1958 in the Southeast Missourian. The headline over it read: Corrective Measures to Stop Creek Overflow in West End Needed."

The area along Kingshighway (Highway 61) has been flooded three times in the past month by overflow water from two creeks which in normal times merely trickle with water, but which during a heavy rain become raging rivers.

The pictures, taken after the last incident the other night, well illustrate what happens. The highway is inundated and property along it covered with water, which when it runs off, leaves a deposit of mud.

An offender is Cape La Croix Creek, which originates in the hills some eight miles north of town and meanders through farm land to where it enters Cape at the west edge of town. The other is Walker Creek, a small stream that has its headquarters almost in town, but long has been a natural drain.

Adding to the situation has been the rapid building up of the area through which the creeks pass, with paved streets taking the place of soil in which rainfall would soak up. Man-made drains, too, move off the water more rapidly until it reaches the creeks.

Straightening of the two creeks by elimination of jogs and bends has been suggested as necessary to solving the situation, but that alone won't be sufficient. It is apparent that the territory, now being damaged, will not get complete relief until a storm water sewer system is put in. There is none now, although most of the area is served by a sanitary system.

That something should be done is apparent, and it is a matter not only for the people who live or have business places in the section, but for all citizens. The problem is that serious.