Before Hobby Lobby came to Cape Girardeau in 1993, its building had seen other stores over the years.

Next was Mohr Value. Then Wal-Mart. 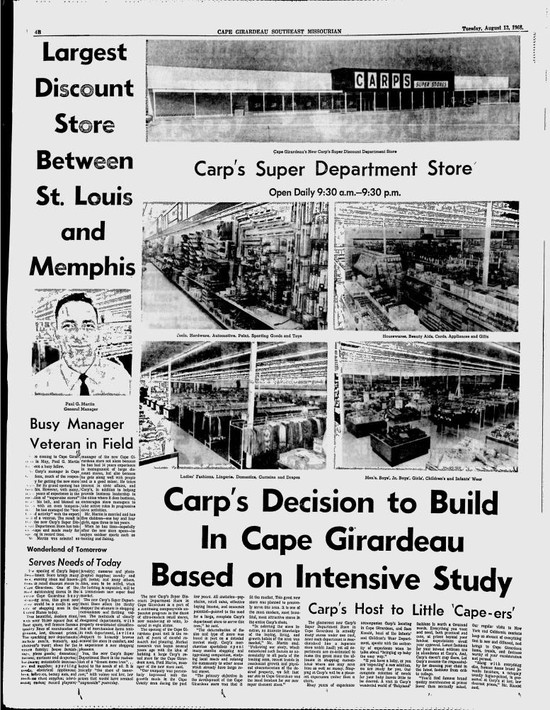 Carp's has a long and brilliant history. The first Carp's store was opened 51 years ago by Sam and Bernard Carp at Mt. Vernon, Ill. It is a far cry from this humble beginning in an Illinois country town with dirt streets, in the horse and buggy days, to the modern giant that Carp's is today among America's most progressive and fastest growing retail organizations.

The founding fathers of Carp's established the firm, solid, sound basic principles which have been the guiding light for policies through the years--handed down from hand to hand--generation to generation.

"Trade is built on confidence--the implicit confidence that a customer has in the merchant which whom he trades. From the very beginning, Carp's has always striven to prove that our customers can have complete confidence in everything that we sell. Every item in Carp's store is strictly first quality, rigidly pretested before it is purchased, and fully guaranteed to our customers. We take the 'guess work' out of buying for our customers. This builds confidence, and confidence builds business.

"Now, tie these things up with lower prices, higher quality, courteous salespeople, fresher styles, greater variety, a friendly store atmosphere, and it is easy to see why 'Save at Carp's Where You Can Always Do Better' is our slogan.

"We are proud to become a part of Cape Girardeau and surrounding trade areas. From the moment we were invited to come to Cape Girardeau, we have looked forward to the opening of this beautiful, new, super store. We have brought to Cape Girardeau a new type of discount operation. It is a happy, modern, homey, giant store full of crisp, new merchandise--so nice, so clean, so fresh, and bright. It is your store, and we want you to be proud of it."

The opening of the new Carp's Department Store here Wednesday attracted throngs estimated to be in the thousands and created a traffic jam at the Kingshighway entrances and in the 600-car parking lot.

Police stationed at the entrances waved traffic past the store after the parking lot filled and it was apparent that it would hold no more cars.

Inside the store, it was just as crowded. The lines behind each of the seven check-out lanes extended for the depth of the store, estimated to be about 125 feet.

When the store opened at 9:30 in the morning, a large crowd waited at the doors. Shortly thereafter, a store official said, the entire parking lot was jammed as more shoppers arrived.

The 50,000-square-foot store is the retail company's largest. An addition of 25,000 square feet for a grocery outlet is expected to be constructed later.

The store is situated west of Kingshighway near the William street intersection.

Agreement, made public today by Ted C. Wetterau, chairman and president of Wetterau, Inc., and Sam M. Walton, chairman of Wal-Mart Stores, Inc., calls for purchase by Wal-Mart of 16 of the 20 Mohr Value discount department stores operated by Wetterau.

This purchase will include the Mohr Value Store at 211 South Kingshighway, Dave Lindeman, store manager, has been advised. It is understood the four stores being retained by Wetterau are located in Illinois.

Citing the reason for the sale of the properties, Mr. Wetterau was quoted: "Mohr Value had not yet achieved the sales volume or number of stores that permits a retail chain to optimize its performance. Rather than divert additional resources and management talent to Mohr Value we intend to concentrate on other Wetterau activities with far greater potential for us."

Mr. Walton, the Wal-Mart head, commented "We have observed these Mohr Value stores closely through the years. They are very fine stores with excellent standards and outstanding personnel. We strongly feel that these stores and the communities in which they are located complement our present operation and market strategy. We plan to retain all personnel and management currently employed in these stores."

Wal-Mart has two retail outlets in this immediate area at Jackson and Perryville. 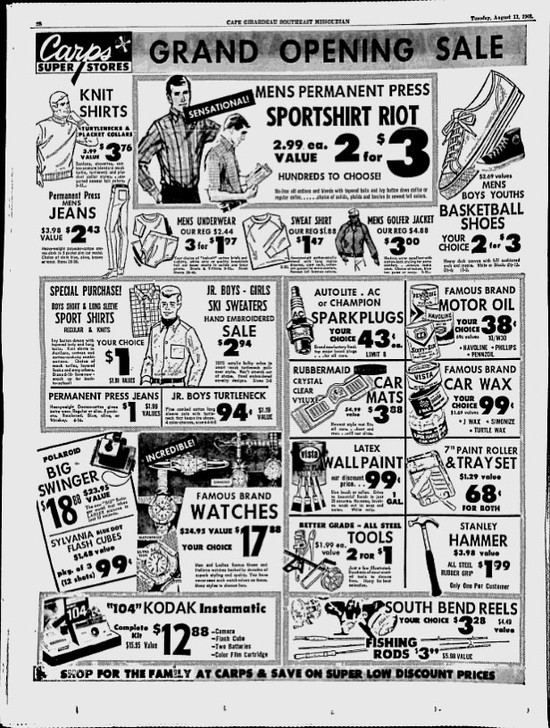