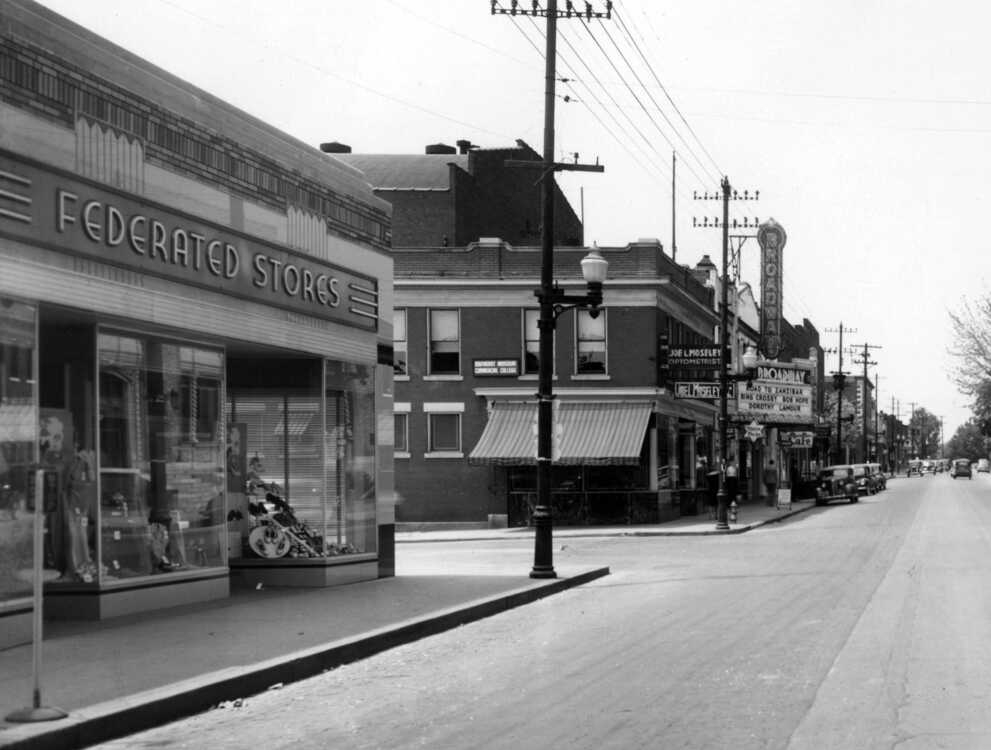 This picture taken in 1941 at Broadway and Ellis street shows the H.L. Marsh Federated Store, which opened in 1940, at 735 Broadway in Cape Girardeau. (Kassel's Studio photo)

In the building across the street, Joe L. Moseley, Inc., jewelers and optometrists occupied the ground floor with Southeast Missouri Commercial College on the second floor.

The Broadway Theater was showing "The Road to Zanzibar" with Bing Crosby, Bob Hope and Dorothy Lamour.

Formal opening of the new Federated Store, 735 Broadway, will be held Saturday. The establishment, to be owned and operated by H.L. Marsh, for many years a leading merchant at Greenville, will carry lines of men's, women's and children's clothing, including shoes, hosiery and will also handle piece goods and other drygoods merchandise.

The store is now being fitted with new fixtures and the stock arranged. It occupies a new building recently erected by Anton Haas on a portion of the site of the Bartels Mercantile Co. building, which burned in the winter of 1937. Final work is now being done on the ornamental front of the one-story brick structure.

Greyhound to Move Terminal to Broadway

Greyhound Lines has leased a new one-story brick building, owned by Anton Haas, at the southeast corner of Broadway and Ellis street, and will move there from its present terminal in the Hotel Idan-Ha building within another six to eight weeks, A.J. Emory, of Memphis, Tenn., assistant traffic manager for Dixie Greyhound Lines, announced today.

Mr. Emory, a former Girardean, who attended Central High School, said his company has taken a five-year lease on the building, formerly occupied by the Federated Store. Noland Van Powell, architect for the firm, was here from Memphis Tuesday and will prepare plans immediately for extensive remodeling of the structure, after which a contract will be let locally for the project.

It is expected to have the project completed in time to move the terminal between March 15 and April 1, Mr. Emory said. Negotiations had been carried on for several weeks.

Just what improvements are to be made in the building, which has a full basement, were not definite today, but these will include a waiting room that will accommodate at least 50 persons, rest room facilities for both white and Negroes, and an entrance on the west, of Ellis street side, where a marquee will be built to the street line to permit loading during bad weather without inconvenience to passengers.

Busses will be parked on the Ellis street side of the building. Other lines now being served by the Greyhound terminal will also be served from the new terminal. They are Semo, Carbondale and Harrisburg, Arkansas Motor Coaches and Scofield lines. Edward B. Fritts, local agent, said the regular schedule will call for arrival and departure of 44 busses daily from the terminal, this including the above-mentioned lines.

Mr. Emory said a number of locations were considered, but the one chosen was regarded as most logical and located to give the most convenient service to the traveling public.

Greyhound Lines has been operating in Cape Girardeau since 1926 and have been located in the present place 12 years, moving there from the building which now houses the Rialto Theater. First reports on the new move included one that the new terminal would be equipped with a restaurant, but Mr. Emory said his company does not have that in mind, as there are other restaurants in the vicinity of the new location.

In 1947, the Greyhound bus terminal moved to a new building at 30 S. Spanish Street. An advertisement in the Aug. 18, 1947 Southeast Missourian listed seven daily arrival/departure times.

The former location at 735 Broadway was sub-leased by Greyhound to C.L. Houser who had the ticket office and restaurant. He then operated the Dixie Dairy Bar and restaurant in that location.

At the time, that left two bus lines operating from a Broadway terminal, St. Louis-Cape Bus Lines and Great Southern Bus Lines, which served out of a building at 725 Broadway. The former line purchased a new terminal at 16 N. Frederick street and would shortly move operations to that location.