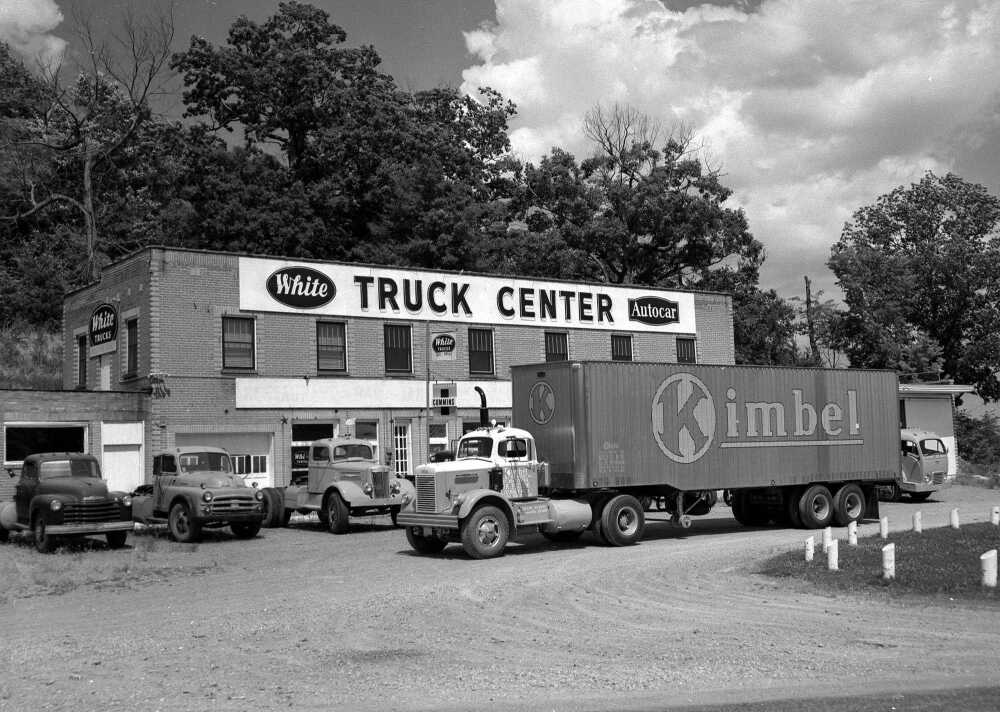 Truck Center Mo., Inc. was photographed by G.D. Fronabarger in the 1950s. The business was located on Highway 61 south of Cape Girardeau across from the Viaduct Court. The business handled trucks made by White Motor Company and Autocar Company.

A Kimbel Truck Lines truck is shown in the photo. We asked Elroy Kinder about the Kimbel truck company. He responds:

"Mr. George Kimbel was the owner of the Kimbel Truck Lines which used to be headquartered at the southeast corner of Independence Street and Kingshighway. Nice big white trucks with red lettering and good design on the script. I think ABF bought them out. This is where Charlie Harris had his Dodge dealership in the 1960s.

"I remember in the early 50's when Kimbel had a trailer painting and repair shop at the southeast corner of Boulevard and Independence. I remember part of the shop was basement level with a ramp. Seems like it would not have been large enough to accommodate trailers. They did great painting of the trailers and the name...white with red letters. Also I seem to remember the trailers were of the 4 wheel size and later, from your pictures, they were the larger with 8 wheels. Also the trailers I described being painted were smooth sided, not ribbed as in your picture.

"This is the truck center at the northeast corner of South Sprigg Street and Highway 61. Probably in the mid-1950's. The Viaduct Court would be to the right of the truck center."

Kinder shares a color photo, below, that he made in the early 1960s when Interstate 55 was under construction. The view is to the northeast. The truck center is the same as above. "Dirt was being taken from the hill to make overpass and ramps," Kinder says. "The area being taken from is now Southeast Missouri Stone Company.

"The building was removed and so was the Viaduct Court."

Kinder provides a few more notes about the truck center:

"When the building with the seven windows was built, it was named "Gateway" with sign on top front.

"Borden Ice cream moved in to the bottom center with freezer arrangement to keep ice cream. The location was their local headquarters and distribution center for the area.

"The upper story was mainly overnight rooms for truckers passing through. A truck servicing garage was on the east end.

"When Borden Ice Cream moved the building became the service center for White trucks, especially the tractor trailer size. The picture you have shows the sign and the array of trucks, also the Kimbel White tractor with trailer.

"As I mentioned before, the Gateway, later the White Trucks, and the nearby Viaduct was a very busy area because of the important truck route for traffic coming from the east, northeast, off the bridge, then down Sprigg, most continuing south over the viaduct on Highway 61.

"The completion of the Highway 74 bypass from Sprigg Street to Highway 61 sounded the death knell for those businesses including Blue Hole BBQ." 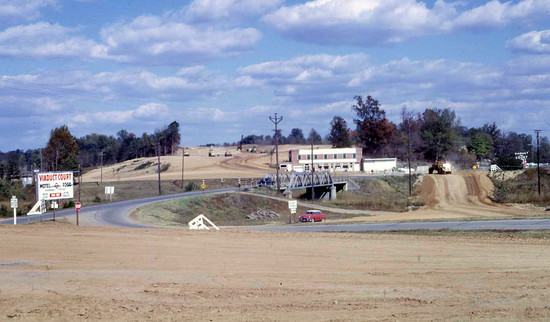