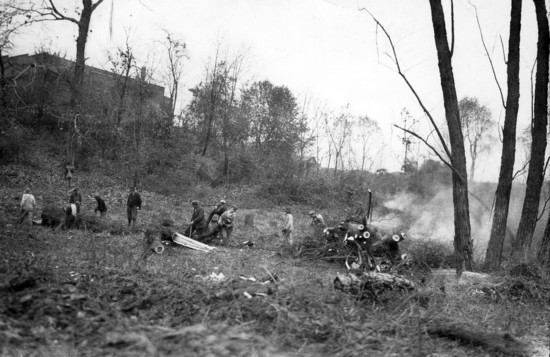 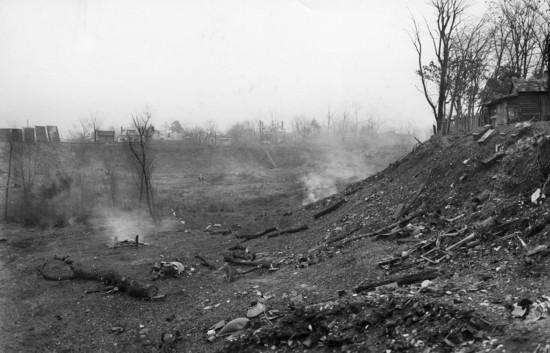 WPA workers, on the malarial control work in Happy Hollow and the Alta Vista drive construction, were off duty today, under the customary schedule of Works Progress Administration. The men are to work 35 hours per week. Fifty are employed on the street job and 21 on the Happy Hollow ditching job.

Cleanup 2 Years Ago Is Now Forgotten

Happy Hollow, that deep ravine lying east of Frederick street between Merriwether and William streets, is gradually reverting to its pre-WPA state.

Two years ago the WPA cleaned out the place in a malarial-control venture, cutting the exaggerated willows, underbrush, weeds and the like. Drainage structures were constructed to carry off the water that accumulated in the basin. The place really began to look respectable.

But last year the weeds and saplings got off to a flying start and this summer rains have fed plant food to the growth in the ravine with record results. Some of the saplings are now as tall as a fireman's ladder and the weeds have done well in keeping up their part. The ditch dug down through the ravine to carry off water is no longer visible, undergrowth covering it.

Rats, 'possums, mice and bugs infest the city dumps of the banks along Frederick street. Mosquitoes buzz around at night, multiplying in their again unmolested habitat. It doesn't take mosquitoes long to reclaim a breeding ground they temporarily lose, so the malarial control workers say, You've got to keep battling them. The federal government's expense annually in fighting the pest would finance a small war.

At the present rate of growth another year of being left alone and Happy Hollow will be back in its former glory, and the work required to clean it out probably will be double of what it will take at present. Happy Hollow is a big place and it will be many years before the city, using it as a municipal dumping ground, will be able to fill it.

A history of Happy Hollow

Shawnee and Delaware Indians used to camp in Happy Hollow in the early 1800s.

Alexander Hamilton Willard, a member of the famed Lewis and Clark expedition, returned from the westward journey and bought an acre lot in the Happy Hollow area near Frederick Street. Willard, who served as a blacksmith, gunsmith and hunter for the Corps of Discovery, purchased the land from Cape Girardeau founder Don Louis Lorimier.

In 1810, he sold his Happy Hollow lot for $100. The property was located near a spring and included a log house, according to records on file in the Cape Girardeau County Archive Center.

The area had a spring that provided drinking water in the late 1800s to nearby residents whose cistern went dry, according to newspaper accounts.

Happy Hollow was home to a brewery. Ferdinand Hanny operated the brewery in the mid-to-late-1800s. He died in 1887.

A man-made sandstone block cave believed built as a cooling cellar for the brewery attracted children and vagrants long after the brewery disappeared. It was reported that the cave at one time extended several blocks.

The Southeast Misourian reported in January 1952 that the cave may have been used by bootleggers during Prohibition.

The area was used as a city dump for a long time. Old tires remain buried in the loose soil.

In 1943, a city commissioner told the Southeast Missourian that Happy Hollow could hold the city's rubbish for "many years." But in 1945, neighborhood residents objected to the dump, which was plagued by repeated fires, noxious odors and an open sewer that ran through the area.

In 1946, the city banned dumping in the ravine.

Happy Hollow continued to be an informal dumping ground well into the 1960s. In September 1966, a trash fire at Happy Hollow sent flames soaring 60 feet into the air, the newspaper reported. Firefighters brought the fire under control, and later more than 200 loads of dirt were brought in to smother the fire.

In the same month, the Southeast Missourian ran a reporter's observations on the rat- and garbage-littered area, noting that "Happy Hollow also breeds a superior brand of chiggers."