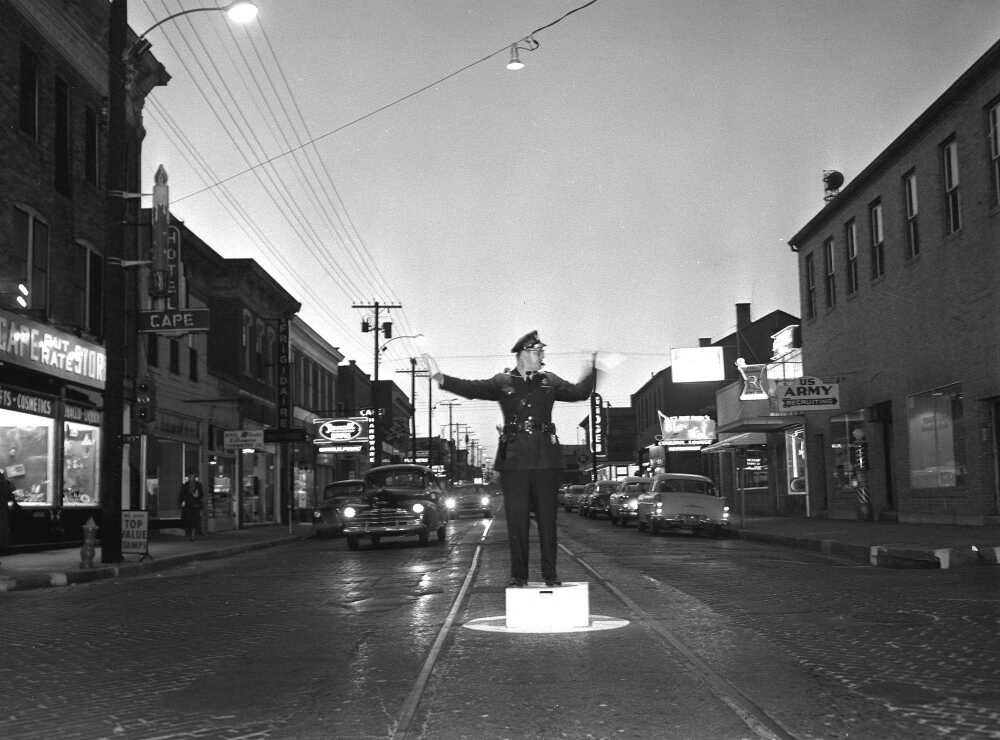 G.D. Fronabarger made this photo of a Cape Girardeau policeman directing traffic on Broadway at the intersection of Sprigg Street, possibly about 1957. [See story below.]

The 1956 city directory lists these businesses visible in the picture:

A difficult police assignment is that of point traffic control, directing traffic at an intersection. The officer has the mission of getting as many cars through an intersection as possible, always being mindful that safety to pedestrians is an important consideration. Traffic directions during hours of darkness is more difficult and also more dangerous, more difficult because his signals are more difficult to see.

During the 5 p.m. rush we shall have officers at Sprigg, Pacific and Boulevard on Broadway. We appreciate extra care on the part of drivers during that critical time at those intersections.

Although Broadway is now a well lighted street, motorists are still having difficulty in seeing the traffic officers at the intersection. We expect to correct this to some extent by furnishing those officers with reflectorized white gloves which are on order. The greatest danger to the traffic officer, during hours of darkness is caused by blinding headlights. We believe this is the chief reason for motorists failing to see the traffic officer.

A car with lights on high-beam approaching an intersection not only endangers the life of the traffic officer, but it obscures arm signals of other motorists. We therefore request motorists on Broadway during rush hour to drive with low-beam or parking lights.

Read more about Cape Cut Rate and Cape Hotel in this blog by Sharon Sanders: