Traffic heaviest on Broadway in 1947 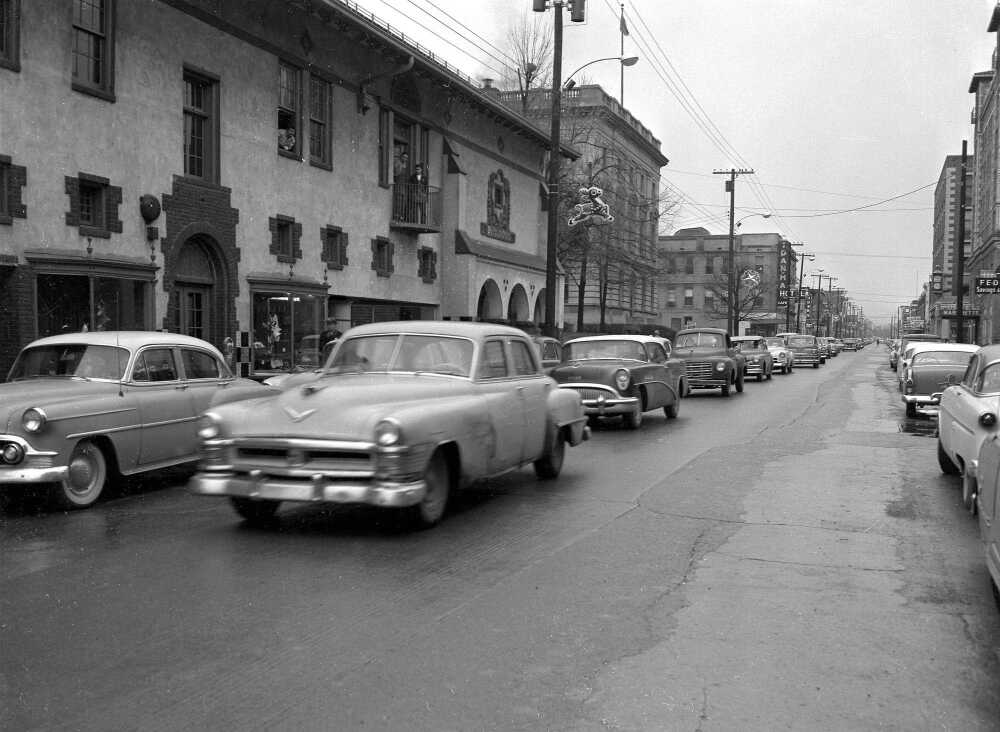 Traffic moves in the 300 block of Broadway past the Southeast Missourian building in this undated photo by G.D. Fronabarger.

Traffic in Girardeau Heaviest on Broadway

Vehicular traffic in Cape Girardeau is heaviest on Broadway, east and west of Sprigg street, a count made by the State Highway Department in June shows.

An average of 10,449 vehicles per day were registered on the automatic counters on Broadway in the sector immediately west of Sprigg street.

On Broadway, in the block between Fountain and Lorimier streets, the counters recorded an average of 7324 vehiclesl lin the 24-hour period.

Third heaviest traffic was recorded on West Broadway, east of Clark avenue, where an average of 6467 cars were counted in the 24-hour period.

Main street, south of Broadway, recorded an average of 6258 vehicles per day.

On Sprigg street, immediately south of Broadway, there were 5601 cars per day, the fifth heaviest traffic movement in town.

Ranking sixth was the Boulevard, north of Independence, where 4793 cars were counted as an average for a 24-our day.

The count was made from June 2 to June 6, with a five-day check being made on Main street, a four-day one on Broadway and two and three-day ones at most other points.

No count was made of Saturday and Sunday traffic, the check being started on Monday and concluded on Friday.

The check by automatic machines was made by the highway department as a part of its planning program. Similar checks will be made annually in all the larger cites of the state.

There were 1060 cars recorded during the peak hour, beginning at 4:15 o'clock in the afternoon.

Average peak hour traffic on Broadway east of Fountain was 670, beginning at 4:15 o'clock.

Indicating the heavy traffic on South Sprigg, the count showed 4047 cars per 24-hour day north of Hickory street, with the peak hour starting at 3:15 o'clock and 305 cars counted.

That Independence street is also carrying heavy traffic was indicated in the report showing 3823 cars daily counted in the sector east of Henderson and 3420 east of Fountain street. Peak hour was in the late afternoon, 4:30 o'clock.

Morgan Oak, east of Sprigg street, had 3433 cars daily, with the peak of 262 cars being at 5 o'clock in the afternoon.

Aquamsi street, the Main street extension to the south, had a daily average count of 1320 vehicles, with the hourly peak of 170 being at 4:15 o'clock.

Broadway then and now