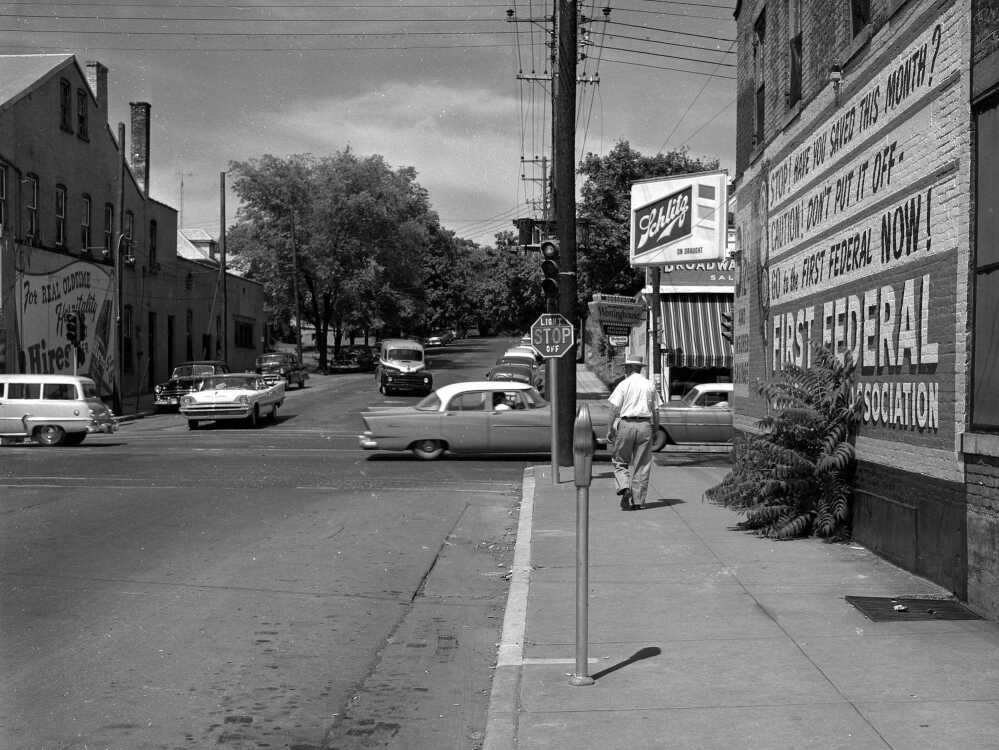 G.D. Fronabarger photographed the intersection of Sprigg and Broadway in the late 1950s.

Several elements shown pose the question: Why was the picture taken?

[Simple answer: Frony documented the unsightly weed growing against the building on the right.]

A working traffic signal has a stop sign below reading, "STOP Light Off."

Or perhaps it reads, "Light Off STOP."

It could mean, "Stop if the signal is not working."

On the right is a sign painted on the Julius Vasterling building that was a bar.

At the red light it reads, Stop! Have you saved this month?

At the yellow light it reads, Caution! Don't put it off.

At the green light it reads, Go to the First Federal NOW!

On the left side is a building that was vacant in the late 1950s. It became Chris Cross Cafe in the 1960s.

Note the parking meter on Sprigg Street, as well as a "no parking" zone painted on the curb.

Curiously, the story below mentions a blue light instead of green on the first traffic signals installed in Cape Girardeau.

The first traffic signal lights in Cape Girardeau were installed at the intersection of Broadway and Sprigg street today and were to be ready for use late this afternoon.

The lights were placed at the direction of city officials as an experiment before the purchase of the signals for a number of street intersections.

Three colors show on the lights, red, blue and amber. The red color denotes a complete stop, blue indicates traffic may proceed, while the amber light is for caution.

A study of the traffic situation at this intersection, particularly with reference to left turns, will probably be made.

The lights are being installed by the Tokheim Oil Tank & Pump Co., of Fort Wayne, Ind., which is represented here by Paul Muxen.

Left turn lanes on Broadway at traffic lights at Sprigg street and Pacific street were recommended to the City Council for adoption for a second time, at a meeting of the city's Traffic Advisory Committee Monday night.

The committee suggested the left turn lanes be placed in the center of the street and that through traffic lanes be marked off to the right in each instance. Members noted that enough meters have been removed from curbs at both locations to make room for the suggested changes.

New left turn lanes for westbound traffic on Broadway are helping with the speedier rush-hour flow, police said today. The center lanes marked for left turns only allow motorists to drive south off Broadway into Sprigg and Pacific streets without holding up through traffic.

The amount of traffic on the street is shown in the fact that the white paint for the lanes is nearly all gone. Painted on only Monday, the lines were hardly visible today (Thursday), motorists reported.

Right turn on red after stop