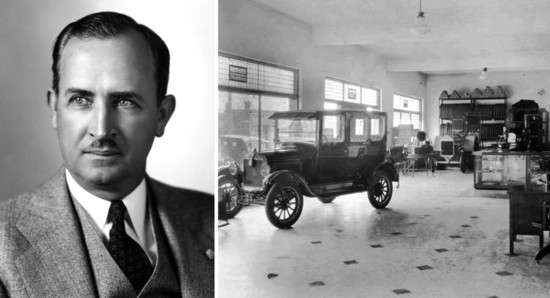 The Ford dealership started by Fred A. Groves, above, in 1914 is marking a century of service in Cape Girardeau this year. Shown is an early photo of the showroom at Sprigg and Themis. 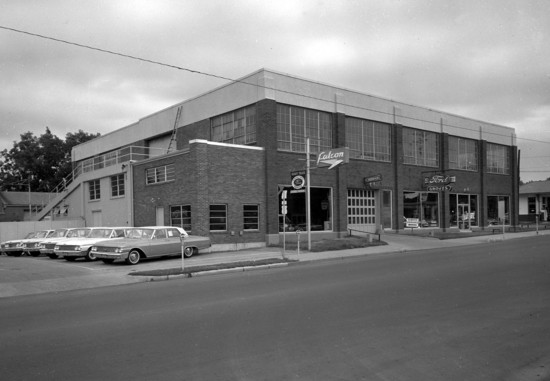 The Fred A. Groves Motor Co. moved to this building at Sprigg and Themis in 1924. The business began in the Himmelberger-Harrison building in 1914. (G.D. Fronabarger photos) 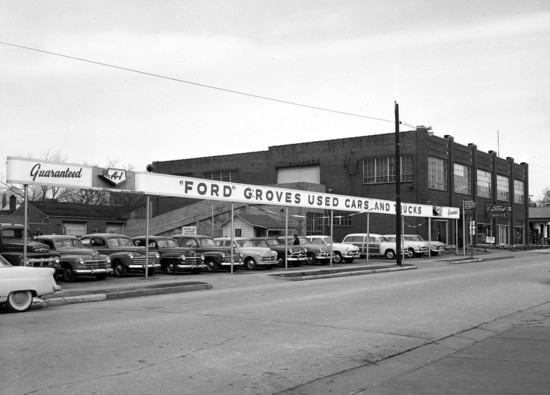 The horse and buggy went out of date for Fred A. Groves the first day he took the wheel of one of those internal combustion machines.

A two-cylinder Maxwell, 1906 vintage, gave Mr. Groves his first case of infatuation with the automobile, but it was the Tin Lizzie that became the femme fatale.

During that half-century, Mr. Groves has witnessed--and indeed helped--the wobbly-legged automobile business of 1914 grow into a giant of industry.

He has seen the evolution of the automobile from the spindly horseless carriage to the sleek, powerful luxury model of today.

Mr. Groves' business grew up with the industry, and in the process he was as responsible as anyone for putting Cape Girardeau on wheels.

Mr. Groves and Ford began their long and happy association in a little office-showroom on the ground floor of the Himmelberger-Harrison Building.

But the young businessman was also on the ground floor in another sense. Henry Ford, employing mass production methods that would put a car in the average man's garage, was just starting to build his industrial empire.

"It became evident that the Ford was the car making progress on a firm footing," he recalls.

The name Groves has become almost synonymous with Ford in Cape Girardeau. The business was christened in 1914 as the Fred A. Groves Motor Co. and still bears that name, but to Girardeans, it is "Ford Groves."

Mr. Groves explains that it was a dentist friend, Dr. F.D. Rhodes who coined the nickname, "Ford Groves," noting the similarity between Fred and Ford. The name stuck for him as an individual and for his business as well.

The genesis of the Groves Ford agency here was also the starting point of the distinguished law career of Russell L. Dearmont, whose first legal case was drawing up the papers of incorporation for the new business.

Since 1914, Mr. Groves estimates his agencies have sold perhaps 25,000 new automobiles. He well remembers the first one.

It was a van, similar to today's panel truck, bought by the Parisian Cleaners, which had its business in the 500 block of Broadway. The owner was W.L. Shuck.

Because the Ford Motor Co. at that time did not manufacture vans, the assembly of this particular vehicle was about as much Cape Girardeau as it was Detroit. A Cape Girardeau man, A.F. Maurer made the body and it was joined with the chassis of the passenger car to complete the vehicle for the Parisian Cleaners.

The Groves agency went on that first year to top its quota of 136 new car sales, distributing models that today are rather rare antiques, viewed with a mixture of amusement, affection and nostalgia.

In that day, however, automobiles were just emerging from their role as the rich man's luxury.

There were 61 automobiles registered in Cape County, Mr. Groves said, and his principal competition was a horse and buggy dealer in Jackson.

The older method of transportation, in fact, still had a strong hold on many. Not sharing Mr. Groves' enthusiasm for the motor vehicle was an official at the bank where Mr. Groves sought financing to start his business.

"It's just a passing fancy, it will never take the place of the horse and buggy," Mr. Groves recalls the bank official saying.

Other automobile competition in Cape Girardeau was normally represented in the early years by two or three other agencies, which changed hands and identity frequently.

Mr. Groves himself had been in the automobile business selling other makes for four years previous to the opening of the Ford business.

He started in his native Bonne Terre in 1910 with the Buick agency, but was forced out of business when the manufacturer, having financial difficulties, was unable to supply the automobiles.

Mr. Groves came to Cape Girardeau the next year and operated a Hudson-Hupmobile sales enterprise for three years.

Mr. Groves recalls that early years of business had their special problems. Breakdowns of automobiles were frequent and flat tires were commonplace.

"We lived through a lot of that," he said. "Sometimes the owners held us personally responsible for the trouble."

The Ford Groves business grew and expanded, moving to its present quarters at Sprigg and Themis in 1924. At one time, Mr. Groves had agencies at New Madrid, Fornfelt, Jackson and Sikeston as well as Cape Girardeau, disposing of the last one at Jackson about five years ago.

On three occasions during the past 50 years, sales of automobiles were interrupted, twice by war and once by the historic Ford changeover from the Model T to the Model A in 1927-28.

Ford sales in general were sagging with the Model T, but the introduction of the Model A sent them on their way again.

"It was a much heralded, much ballyhooed job," Mr. Groves said of the Model A.

During World War I, Mr. Groves was a second lieutenant in the Army, supervising a maintenance unit for that other new mode of travel, the airplane.

Thus Mr. Groves has had an active role not only in the early stages of development of the automobile, but also of the airplane.

To these might be added the farm tractor. The Groves automobile agency during the early years sold the Ford brand tractor, the Fordson, which Mr. Groves recalls was much in demand. He mentions this phase of his early business with something of a grimace, however.

"They were a pain in the neck," he said.

Mr. Groves did not allow the suspension of car manufacturing during World War II to keep either himself or his property idle. He converted the upper story of his building into an electronics plant, making resistors for defense purposes, and employing 140 to 150 persons.

Machinery for the plant, he remembered, was a difficult item during those critical years.

"We almost had to search the junk yards for tools," he said.

Key members of that manufacturing operation were Walter Davis and H.C. Collie Jr. The plant was the forerunner of the present Davis Electric Co. operated by Mr. Davis who employs Mr. Collie.

Mr. Groves during the war years was employed as the manager of the Cape Girardeau traffic bridge. That bridge, incidentally, and its eventful background, involved Mr. Groves in another important way.

As a commissioner of the Cape Special Road District, it was Mr. Groves who was largely instrumental in causing the road district to buy the bridge from the Champion Sparkplug Co., thereby moving the bridge from private to public domain and leading to the span becoming a free bridge.

The bridge was paid for by revenue bonds, a normal method of financing today, but a rather new one in 1947 when the bridge was bought.

Mr. Groves's position on the college board has given him the opportunity to jokingly turn the "now who's boss" tables on his long-time friend, Dr. A.C. Magill.

As a high school boy in Bonne Terre, Mr. Groves' principal was Dr. Magill who later, of course, joined the State College faculty and headed the Science Department.

Besides his automobile and business activities, Mr. Groves has been active in agriculture, operating a farm in the Old Field near Delta, and in real estate development.

Three subdivisions along West Cape Rock Drive bear his name and a fourth one is named for his wife, Mrs. Allene Wilson Groves.

Mrs. Groves is a native of Cape Girardeau, and the original Wilson home was located at the present site of the Marquette Hotel.

Mrs. Groves, from 1956 until 1958, was the national president of the Daughters of the American Revolution, having a membership of 180,000 women.

Mr. Groves was for 12 years a member of Federal Land Bank Board.

He is presently a member of the Rotary Club, chairman of the trustees of the Cape Girardeau Country Club, a trustee of Christ Episcopal Church and a member of the boards of the First National Bank and the First Federal Savings and Loan Association.

The driving of that 1906 Maxwell, belonging to a Bonne Terre neighbor, started a great deal for Mr. Groves. The Maxwells of course have long since passed from the scene.

But the Tin Lizzie, its successors and Mr. Groves have traveled a long road together since 1914.

Fred A. Groves moved his company to Sprigg and Themis from its location on Fountain Street just north of Broadway. Rueseler Motor Company moved into the garage area of the Himmelberger building, later to be known as the old Ford building.