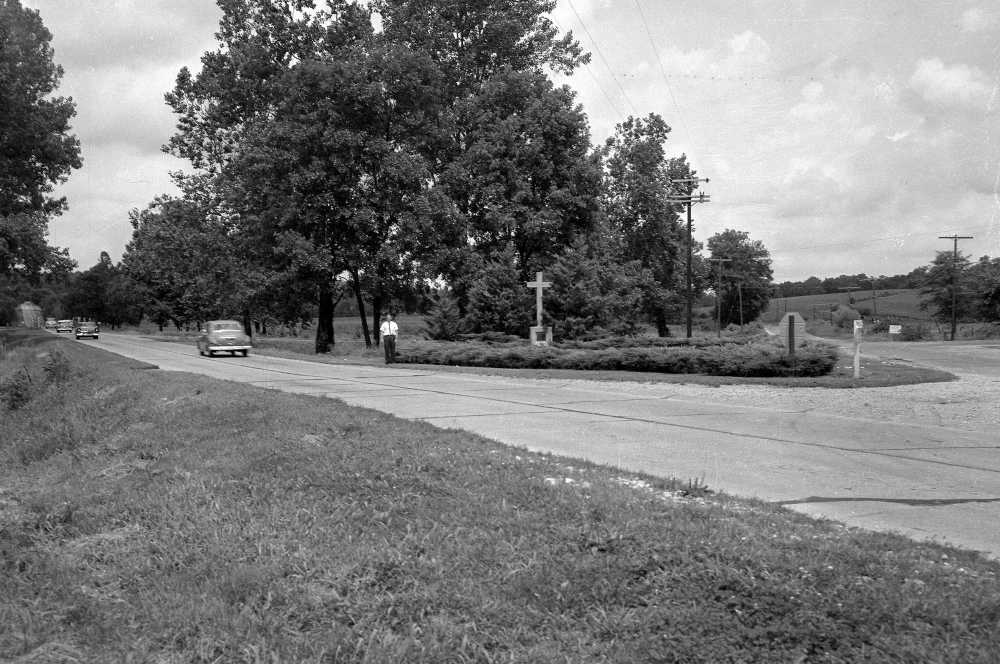 This picture by G.D. Fronabarger was used in the Aug. 2, 1958 Southeast Missourian to show where the proposed new boundary line of the city would cross Highway 61 near Cape LaCroix (Three-Mile) Creek. A line was drawn bisecting the little parklet where the stone cross to early-day religious leaders stood. The new boundary would be four-tenths of a mile from the present city limits near the David Louis Motel. Shown standing on the new boundary line was Robert T. Williams, chairman of the Chamber of Commerce Development Committee, which led the campaign for adoption of the extension proposal.

Cape Girardeau awakened this morning to find it had grown by about 1800 acres, had gained a population of several hundred and had new responsibilities as a result of passage of a special annexation measure at Tuesday's election.

Voters, by an overwhelming margin, agreed the city should expand its boundaries to take in a number of developed areas, other sections in the path of growth and to control that growth by orderly zoning processes.

The vote was 1803 in favor of annexation and 898 opposed, a two-to one margin for the proposal.

City officials said today that technically the added territory became a part of the city with its passage at the election. Formally, they said, it will join Cape Girardeau Thursday morning when the official count of the ballot is made, including absentees.

Residents of the new area, while a part of the city, will escape payment of municipal taxes this year. They were assessed outside the city on Jan. 1 and will pay on the county tax rate.

First payment of city taxes will come a year from this fall for the new territory. Assessment as city property will be made as of Jan. 1, 1959.

The city, at a hearing on a declaratory judgement which asked permission of Common Pleas Court to hold the election, stated it could extend its municipal services to the new area within a reasonable period of time.

It is expected that the Missouri Inspection Bureau, the fire rating organization for insurance companies, will act promptly to bring insurance rates from Class 10 to Class 9 for the area. Further reduction of rates will apply as hydrants and fire service are extended.

The new territory will not become a part of the Cape Girardeau School District until July 1, 1959. This means that children will continue to attend their previous schools unless some special arrangement is made by the Board of Education.

Still to be determined is how city ward lines will be extended to include the new territory. It is not certain at this time whether residents there will vote in the previous precincts or in city precincts in November.

Annexation carried in every ward but one. It lost only in Ward 12, with May Greene School as the voting place, by a 21 vote margin, 70 to 91. Elsewhere the vote ran substantially in favor of taking in the new area.

Incorporation of the new area was the first increase in the city's boundaries in more than 11 years. The last extension was in 1947, and prior to that it was 1925.

There was very little campaigning either for or against the proposal. The Chamber of Commerce supported the move and in a last-minute action those outside who are members of the Cape Girardeau Border Association urged that it be defeated.

The proposed new boundary for Cape Girardeau, at its southern terminus, begins at a corner of the present limit line 1300 feet south of Highway 74.

It projects westward 4100 feet to a point 400 feet west of the centerline of Highway 61. This places it 300 feet south of the Highway 74 intersection.

At this point the line turns northward, running parallel to Highway 61 and 400 feet west of it, until it intersects the present city limit line.

If follows this line westward to a point on Bloomfield just beyond Silver Springs Road, turns north once more and continues in that direction a distance of 7500 feet.

At that point it connects with the present limit line west of Arena Park and turns westward a distance of 3000 feet. Here it moves northward once more a distance of 8400 feet.

It is on this line that it crosses Highway 61 once again at the stone cross on the city side of Cape LaCroix (Three-Mile) Creek.

The distance from the Highway 61 crossing to a point where the line turns eastward is 2000 feet.

On its eastward turn -- the line which will form the new northern city boundary if annexation passes--the boundary is approximately 18,500 feet long, connecting to the present line at a point 150 feet north of Hillcrest Drive and near the intersection of Hillcrest and Country Club Drives. The old boundary then picks up to the Mississippi River.

The cross was originally erected in 1947 to commemorate the visit of three French missionaries in 1699. According to the inscription on the cross, the priests prayed "that this might be the beginning of Christianity among the Indians."

Here is a video of the cross moving