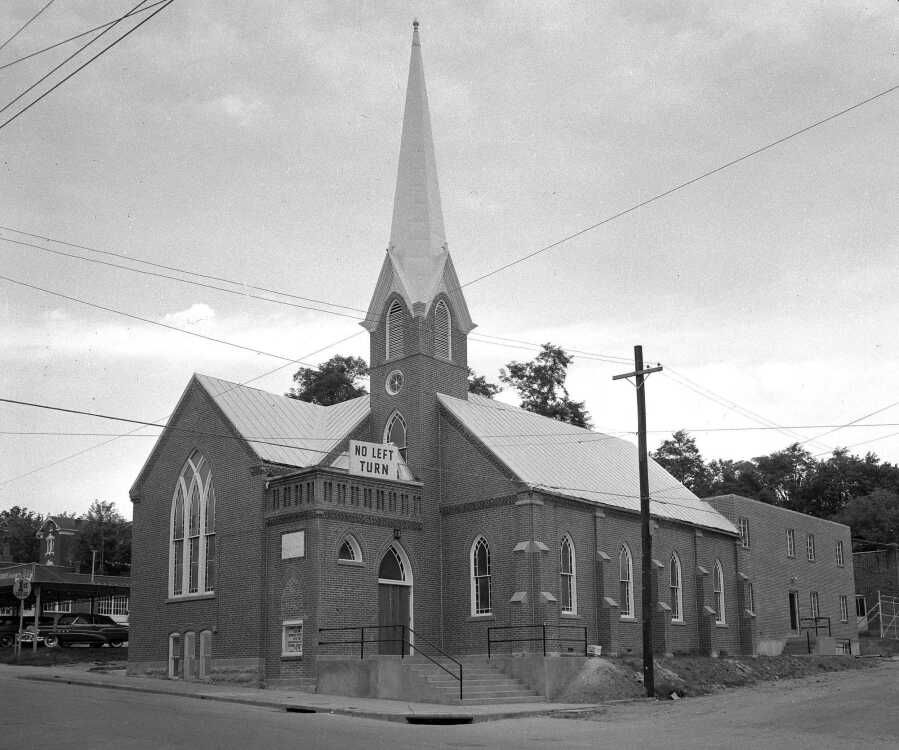 The restored General Baptist Church, Broadway and Spanish St., is shown with its new annex in this photo by G.D. Fronabarger. A similar photo was published in the Feb. 1, 1958 Achievement Edition of the Southeast Missourian. Here is the story:

Restoration of Old Church an Accomplishment of Note

The $50,000 renovation of the majestic old building housing the General Baptist Church was an outstanding project undertaken by a religious organization in the community during the past year.

With the remodeling program completed, the brick building, located at the corner of Broadway and Spanish street, now resembles the original structure erected 64 years before with the exception of an annex at the rear.

Work consisted of a sandblasting job to remove old paint, tuckpointing, redecorating of the interior and the construction of a 2-story annex also of red brick. The annex is used as an Education building, with a kitchen and recreation room in the basement.

An interesting feature of the historic old church is the continued use of the bell that hangs in the belfry. The bell was taken off the steamboat "Julius" which was sunk at a bend of the river known as "Steamboat Graveyard" in the early 1840s by Cape Girardeau's second mayor, Col. George W. Juden, his daughter, Sarah, and two slaves. It hung in the original First Baptist Church on Lorimier street until the present church was built. Then it was moved to the new church.

Also attracting much attention is a huge painting done by Mr. And Mrs. Ed Cadwallader which serves as a background for the choir loft. A scenic view, it shows three towering hills behind a winding stream along the banks of which are numerous tall green trees.

Membership stands at 250. Rev. W.F. Cravens, pastor, said that not only has the building undergone a change, but that reorganization of the church membership, particularly of the Sunday School, is underway and will continue through this year. A definite growth in Sunday School attendance has been noticed since the new facilities have been made available, an average attendance since the first of the new year being 253 as compared to a 187 average for the same month last year.

No plans are made for special drives to cover the expense of the remodeling. Rev. Cravens said that monthly tithing and offerings from regular members is sufficient to cover payments on the 20-year load obtained in order to see the project through. In fact, he stated, that if contributions continue as now, the loan will be paid off in less than 10 years.