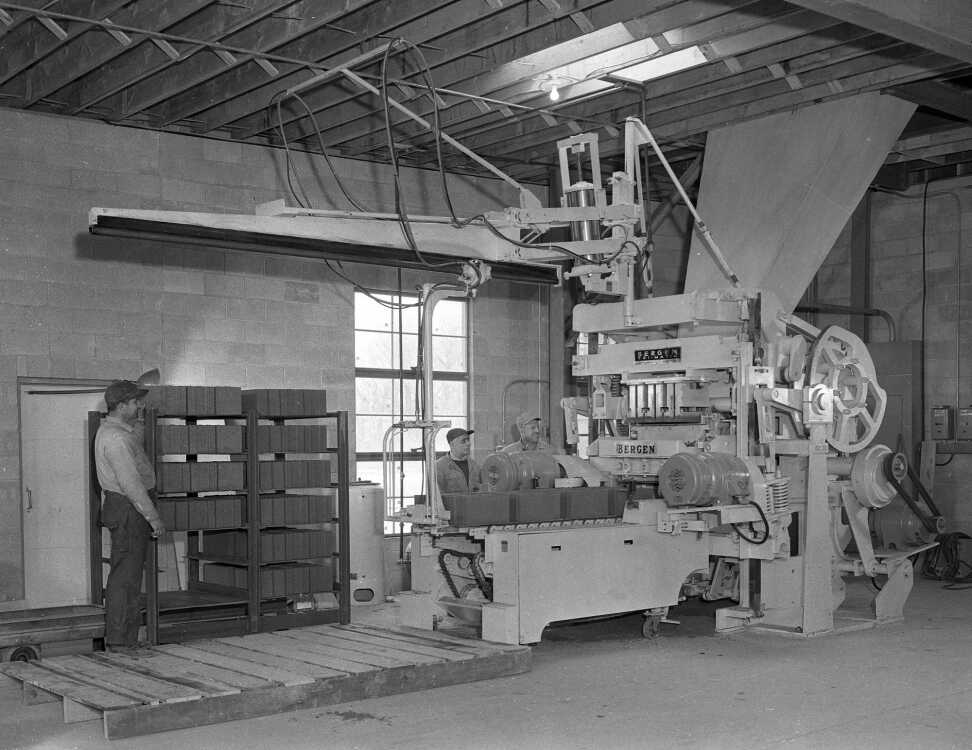 This picture was taken for an advertisement in the Feb. 1, 1958 Achievement Edition of the Southeast Missourian by G.D. Fronabarger. It shows the Bergen Tri-Matic block machine used by the Guth Bros. Block Co. at 120 N. Broadview in Cape Girardeau. It has a capacity of over 1000 blocks per hour.

Guth Brothers Block & Brick Co. was founded in 1946 by Elmer and Vernon Guth. The company began on old Highway 25 near Shawneetown and operated there for several years. In those early years, a good day was when the company could make 25 concrete blocks a day by hand.

In 1957, the Guths purchased a site at 120 N. Broadview in Cape Girardeau and moved the operation there. They added automated block-making equipment which vastly expanded the company's production capacity.

In 1991, the site was the City of Cape Girardeau's recycling center.

Here are notes on the rail abandonment:

City of Cape Girardeau will make formalrequest of Union Pacific Railroad Co. that it remove abandoned tracks along Independence and restore street to city engineering standards; last train rolled over tracks on July 24 and so far there has been no indication of specific plans by railroad for track removal.

Officials with Missouri Pacific Systems in St. Louis are examining bids for the removal of 2.2 miles of abandoned railroad tracks in Cape Girardeau; the project calls for the removal of rails and ties from public rights of way and all public grade crossings along the abandoned stretch of track; the abandoned track and deteriorated roadbed have been blamed for several motorcycle accidents along Independence Street.

The long-awaited removal of the abandoned Missouri Pacific Railroad tracks in Cape Girardeau is underway; removal of the 3.3-mile section of track that was abandoned by the Union Pacific Systems in 1985 began yesterday; a portion of the line runs down the middle of Independence Street.

Workers for Kelley Construction Co. are removing railroad ties from the crossing on Independence Street near the Plaza Galleria; the work is part of the removal of railroad tracks from the entire length of the abandoned Missouri Pacific branch line that runs through Cape Girardeau.