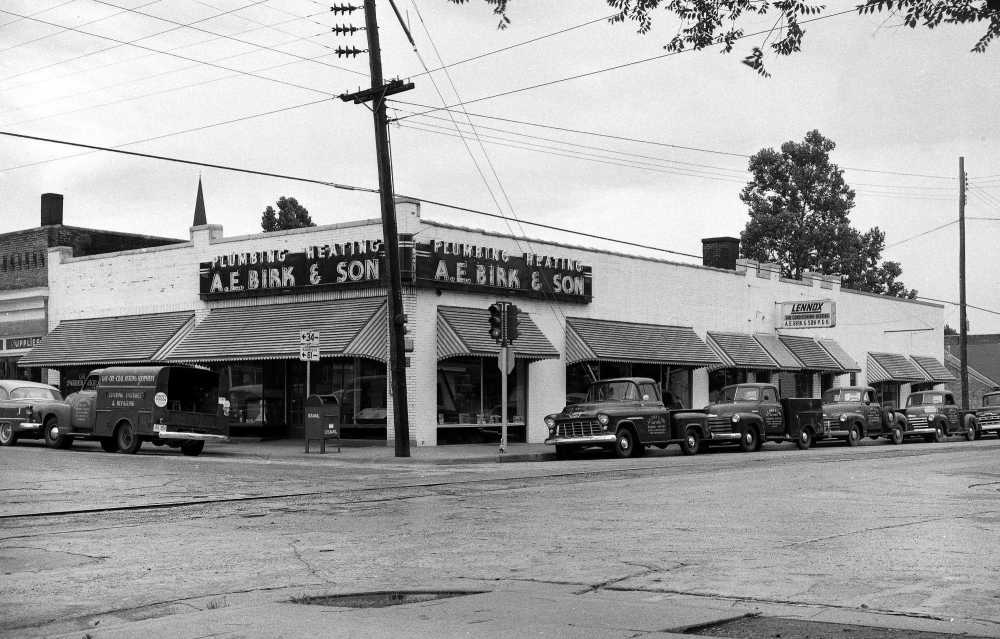 This picture appeared with an advertisement in the Feb. 1, 1958 Achievement Edition of the Southeast Missourian. (G.D. Fronabarger photo)

When the late August E. "Gus" Birk moved out of the basement to a modern, new shop at the intersection of Independence and Sprigg in 1947, he joined a select group of plumbers who were turning from basements and, or, garage headquarters to an era of merchandising.

Birk, a native of Jackson, had moved to Cape Girardeau in 1921, working with the Polack Plumbing Co. until he started his own plumbing operation in 1924.

When Birk moved his A.E. Birk & Son operation to a building at 2 N. Sprigg, his new merchandising operation was featured in a number of national plumbing-oriented marketing magazines. Survey, published by the U.S. Machine Corp., and Rheem Dealer Merchandising News were two of them.

"People around Cape Girardeau called my father the gentleman who put plumbing on Main Street," August W. Birk said of his father, A.E. Birk. A.W. Birk joined the company in the late 1940s after completing service in the Air Force and spending a year at the University of Missouri.

"My father opened his plumbing business as a one-man operation and worked out of the basement of his home at 25 S. Benton," said Birk, who this week announced that the firm was closing after almost seven decades and 45 years at the same location.

The younger Birk and his sister, Betty Birk Roth, joined the company at the same time. Robert W. Roth started work with the company in 1958. A.W. Birk and Roth have operated the firm since the death of A.E. Birk in 1969.

"My father felt that an attractive plumbing shop was not only good for the cash register, but raised the dignity of the plumbing trade in the eyes of the public," said Birk.

"It's with regret that we terminate the business, but my partner and I have now reached retirement age," he said.

"One of our big concerns in closing was our customers who have been with us for many years," said Birk. "I wanted to make sure they were taken car of, so I have arranged with Jess Bolen and Obermann & Son Heating & Air Conditioning to provide service to our many customers."

Bolen, who has been with the company more than 10 years and has many more years of plumbing experience, is starting his own plumbing business, said Birk. "He will continue to service the customers who have depended on A.E. Birk & Son through the years," said Birk.

"Obermann & Son is a Lennox dealer and will provide heating and air-conditioning service to our many Lennox owners, providing warranty and other service," said Birk.

The A.E. Birk firm grew fast after it was founded. During home construction development of the Sunset area in Cape Girardeau, the firm did the plumbing and heating work in many of the homes in that addition.

In later years, the company was called on for commercial projects for various Southeast Missouri State University buildings, including the Show Me Center, and hospitals, schools and the Veterans Home.

Birk said he was looking forward to full-time retirement.

He explained: "One of my interests is woodcarving with a chain saw. I currently have a sculpture of a golfer carved from the stump of a tree in my front yard at 924 N. Cape Rock Road."

August W. Birk carved a statue of Maj. Louis Lorimier from a tree trunk at Cape Rock Park in September, 1997. Here are pictures of the statue in this blog about Cape Rock Park: