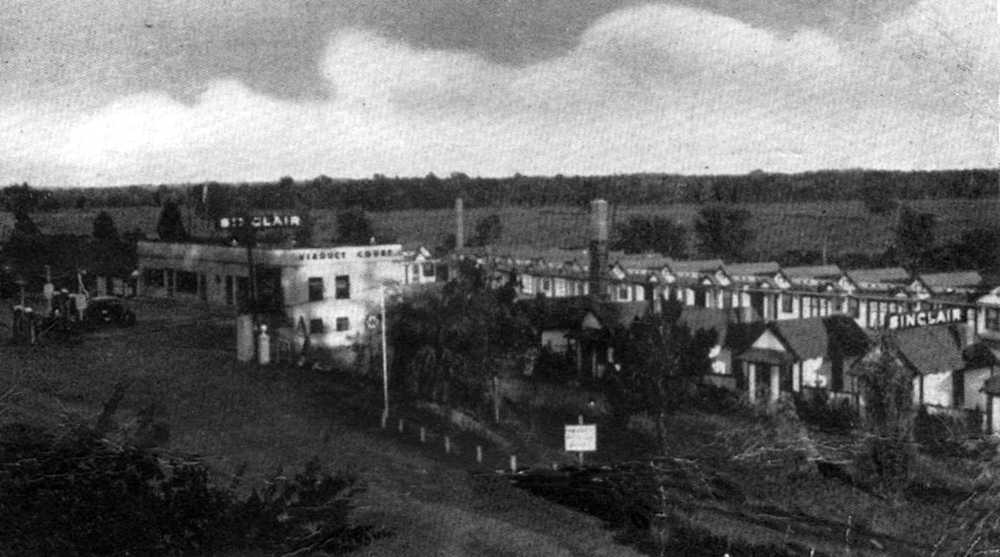 Our librarian, Sharon Sanders, did some digging in the archive to find out about the Viaduct Court. Her comments are included below. Above is a photo postcard. Below is a photograph from microfilm from an advertisement published June 27, 1947 which announced new management by Mr. and Mrs. R.M. Hawkins, owners, and Texaco products for sale. 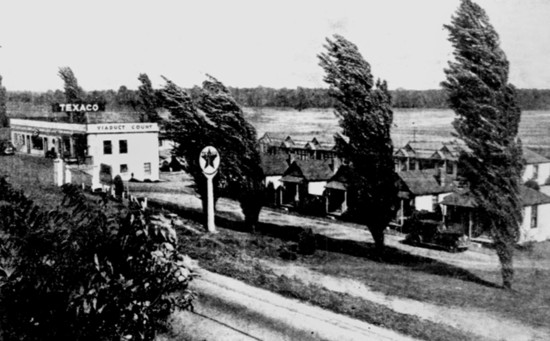 July 22, 1935 Work has been completed on remodeling of Viaduct service station, owned and operated by Mr. and Mrs. Walter Adams, on Highway 74 near U.S. 61; double drives were constructed, and the building was remodeled and a new asphalt shingle roof installed; the building was also moved and put on a new foundation.

It looks like the tourist court was around in the 1930s. The earliest mention of it that I found was in 1938. A later story erroneously says it opened in 1947, but that was a re-opening under different ownership. I found nothing under "Terrace Inn," which was a later name for the establishment.

May 13, 1938 Forty-eight officers of the Missouri State Highway Patrol, under the personal direction of the commander, Col. Marvin Casteel, will be stationed in Cape Girardeau from Sept. 3 to 5 during the American State Convention; the troopers will direct traffic on the highways and assist local police with traffic control and other needs; the troopers will be housed at Viaduct Court.

June 29, 1947 Formal opening for Viaduct Court establishment at Highway 74 and Highway 61 is held today; Mr. and Mrs. R.M. Hawkins are now owners, having purchased combined establishments from Mr. and Mrs. Walter Adams, and 24-hour service is being given; new owners are now operating service station and tourist court departments, and two-year lease was taken by Mr. and Mrs. Ralph Bowerman and Mr. and Mrs. Bill Eifert on restaurant.

Nov. 10, 1943 Consolidated School of Aviation has asked school board for use of Broadway School building, now vacant, as dormitory for youths enrolled in Navy's V-5 air primary training program; tentative arrangements have been made to feed and house Navy flying cadets at Viaduct Courts on Highway 74.

Aug. 31, 1952 R.W. Harper Jr., owner of Viaduct Court, has purchased two-story frame dwelling between Baptist Foundation building and Albert Hall on Normal avenue from State College and is razing it for salvage; small, three-room residence at rear of property has been purchased by F.E. Snider, college librarian, and will be removed intact by low-boy truck; college office reports there are no immediate plans for lot.

The Viaduct Court, so named because of a nearby bridge across the [Frisco railroad tracks], had it all -- cottages, a service station, a dining room, steam heat, showers and garages for tourists' cars. It was a self-contained haven for travelers.

Although the "formal grand opening" of the Viaduct Court was held in 1947, the court, located near the intersection of Highways 61/74, was around for some time before that, according to readers.

Donner Brown of the East Cape Girardeau/McClure, Ill., area remembers passing by the Viaduct in the early 1940s -- before Interstate 55 cut a concrete swath through nearby farmland. "I remember all those small buildings," he said, in reference to the tourist cabins.

"The Viaduct was a project of my uncle," said Pat Tipton, niece of Walter Adams, who was the original owner of the Viaduct Court. Tipton said she didn't know when the project was completed but guessed it would have been in the late 1930s.

Bob Minton of Jackson, Mo., said he remembered the Viaduct as a child from the 1930s.

A number of gas companies -- Sinclair, Texaco, Standard and others -- provided gasoline over the years.

Adams opened Viaduct Court as a Sinclair station, but when he sold the court to Mr. and Mrs. R. M. Hawkins, it was a Texaco. The business was acquired in 1963 by Emmett and Freda McBride and became the Terrace Inn.

Joe Hoffmeister, an area farmer, has some fond memories of the Viaduct Court.

"It had a great restaurant," said Hoffmeister. "Great fried chicken, roast turkey and all the trimmings." Hoffmeister still farms land in that immediate area.

Jack Crafcraft of Jackson also remembers the restaurant for its "great food."

And Velma Nothdurft remembers eating at the restaurant with her parents in 1944.

It was a "thriving crossroads spot," said Naomi Crain.

Janette Stone of Cape Girardeau remembers the restaurant as the site of her graduation party.

Agnes loved crafting, crocheting, motorcycling and fishing. She and her husband ran the Viaduct Court for 10 years.

She worked at Sports Specialty Shoe Co. in Chaffee before moving to Cape Girardeau in 1955, where she and her husband owned and operated Viaduct Court later known as Terrace Inn.

McBride owned McBride Painting and Paperhanging 27 years. He became owner of the Old Viaduct Court in 1963 and renamed it The Terrace Inn.