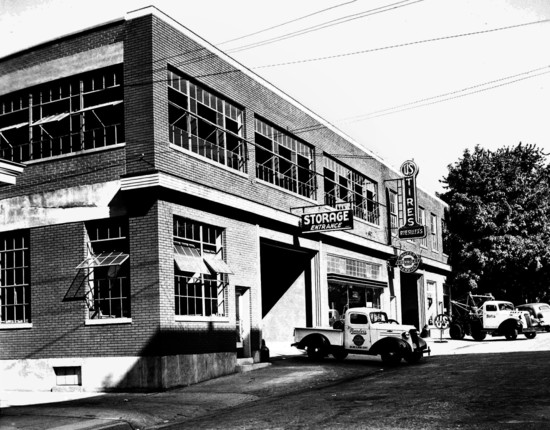 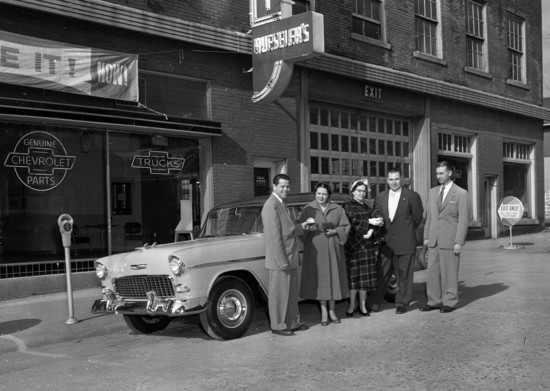 This image was published in the December 15, 1954, edition of the Southeast Missourian: "Formal presentation of a new Chevrolet automobile she won in a national slogan contest sponsored by the Helene Curtis company was made the other day to Mrs. Joe Burciaga by representatives of a distributor company. Also presented was a diamond-studded wrist watch to Miss Julie Birk through whose beauty shop Mrs. Burciaga entered the contest. Shown in the picture at the presentation, from left, are: Mack Stein of the distributor agency; Miss Birk, Mrs. Burciaga, Les Inger, owner of the distribution agency, and Vinson Rueseler, Chevrolet dealer who delivered the car." 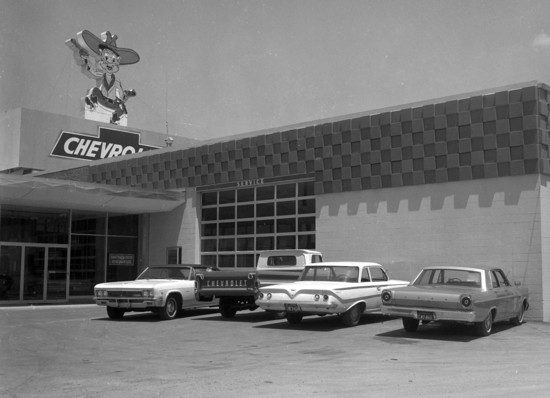 Rueseler Chevrolet Co. moved to this building at 606 S. Kingshighway in 1966 when the volume of business became too great at its location on Fountain Street.

Rueseler Chevrolet Truck and Trailer Center had moved to the new site in 1960. 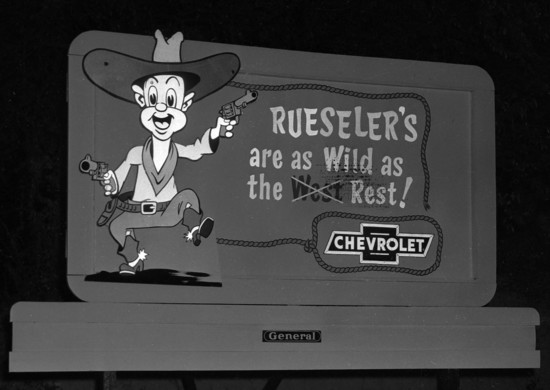 Rusty Rueseler was the advertising logo for Rueseler Chevrolet Co.

The Chevrolet agency in Cape Girardeau has passed into new hands, it was announced today. The new dealers are the Rueseler Motor Co., Inc., 418 Boadway, members of the firm being Albert Rueseler, William Luckman and Theodore Ochs. This firm was organized following the dissolution of the Rueseler-Bohnsack Auto Co., holders of the Studebaker franchise.

The Rueseler Motor Co. will not handle Studebakers, and the Studebaker company has not as yet replaced its local agency, it was said.

The Chevrolet franchise was awarded to the present dealers following the dissolution of the Cape Chevrolet Sales Company, caused by the death of J.A. Withers, with R.L. Wilson, owner of the firm. A corporation composed of Wilson and several employees of the concern was considered, but plans have been dropped, Wilson stated today.

The latter has not stated what business he will enter.

A shipment of new Chevrolets is expected within a few days and the new company plans to have all Chevrolet models in their show rooms by the latter part of the week.

The Rueseler Motor Co. will begin moving its entire stock and equipment to the Himmelberger building, known as the old Ford building, and located on North Fountain street, at once, according to an announcement made by Albert Rueseler today.

"We have leased the garage building formerly occupied by the Groves Motor Co. so as to have room to take care of our expanding business," Mr. Rueseler said. "We are installing additional equipment and will be able to render better service and at a reduced price after Dec. 1, when we expect to be fully settled in our new place of business."

The building now occupied by the company at 418 Broadway is being retained by it.

The end of one era and beginning of a new takes place Friday with the opening of Jim Bishop Chevrolet, Inc., replacing Rueseler Motor Co., for 45 years the Chevrolet sales and service outlet in Cape Girardeau.

The new firm, to be owned and operated by James L. Bishop Jr. of Memphis, Tenn., has acquired the Chevrolet automobile franchise for Cape Girardeau and has leased the building and grounds of the Rueseler firm from Vinson Rueseler. Mr. Rueseler, who operated the agency started in 1925 by his father, the late A.P. Rueseler, said today his future plans are as yet indefinite.