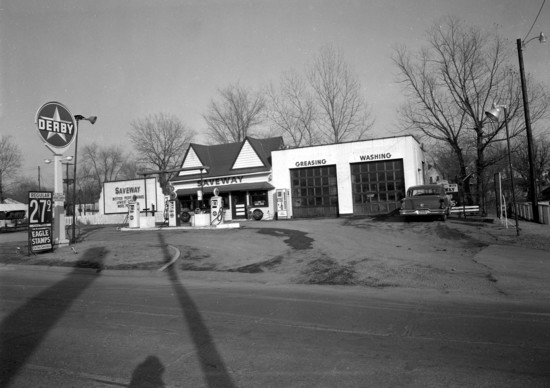 This picture of a gas station eluded identification, so we decided to get some help. We contacted Ken Steinhoff. He said it looked familiar, but he could not pin down the location. The major clue was the trolley track in the lower left corner next to Frony's shadow.

"Using Fred's documentation of the streetcar tracks and then drawing them on a map of Cape, the pictured station is just south of the old Cape Girardeau Northern tracks on West End Blvd, east side of the street, now occupied by Norman's Radiator Service. On Google Earth, the semi-circular curb in the drive can still be seen and you can see the original window and door arrangement in the building facade. An additional stall has been added to the south side of the original two. The power line pole on the south side is the same one that was there when the picture was taken. I would speculate that the sign pole is the same pole that the large reflector light and the houses in the background fit the ones still there today."

So we took a picture of the scene as it looks today. We agree the power line pole could be the same, weathered and without the light today. However it appears the sign pole today is a larger diameter and is not the same as the large reflector light pole. 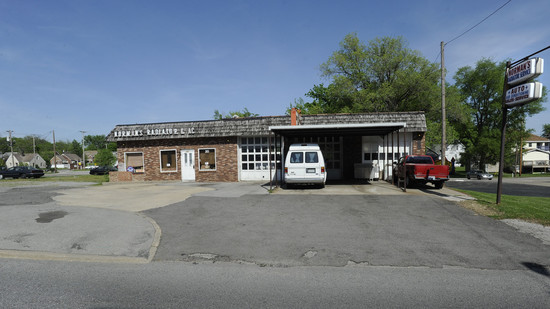 After Keith identified the location, it was easy to confirm with a check of the 1964 and 1968 city directories which list Saveway Oil Co. at 20 S. West End Blvd. The 1962 and 1970 directories list "vacant" at that location.

We guess that Frony made the picture about 1963 as we have found very few of his images were taken later with his 4x5 Speed Graphic camera.

For those interested, here is the documentation of the Cape Girardeau trolley tracks, taken from the book, When Missouri Took the Trolley, by Andrew D. Young: