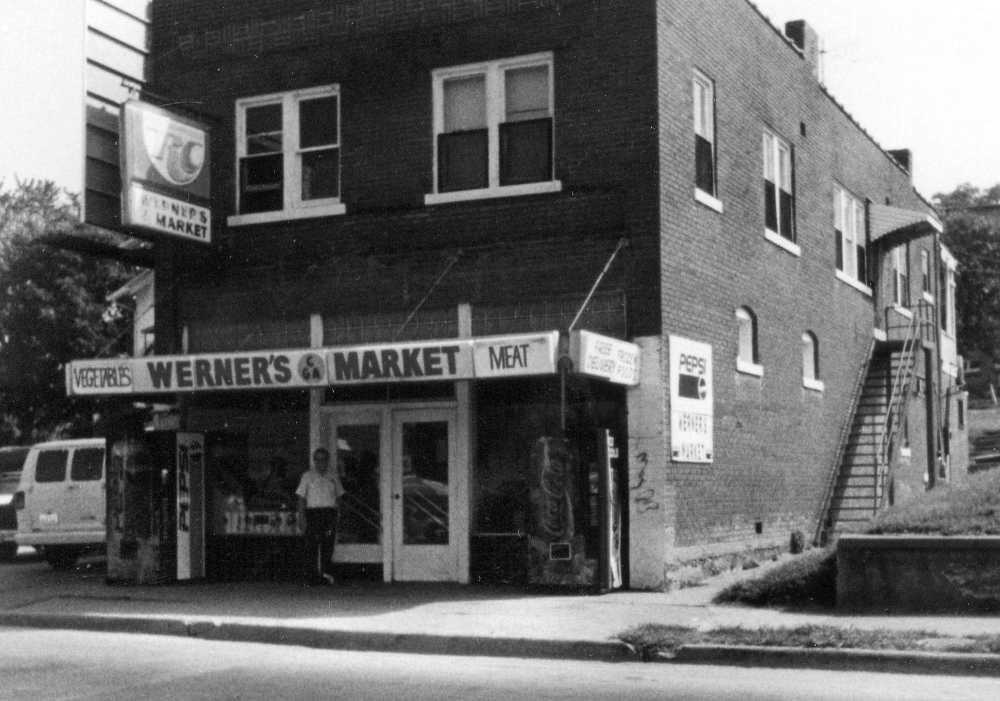 On Dec. 1, 1935, cousins Clarence C. Werner and Alvin A. Werner established Werner's CGA (Cape Grocery Association) Super Market at 1192 Broadway in Cape Girardeau. Werner's Market was the direct result of the Werners' purchase of the F.H. Niemeier grocery store at the same location.

Werner's Market made home deliveries and sometimes even put the groceries away for customers. At the beginning, farmers were among their many patrons, and the store carried several bulk items for them like flour and sorghum. Over time, with more supermarkets coming to town, the number of neighborhood groceries like Werner's began to decline.

On Oct. 16, 1998, Werner's Market closed. Kenneth Werner, the son of Clarence, donated the property to Southeast Missouri State University in 1999, and the building was razed.

In the Feb. 2, 1998 issue of TBY in the Southeast Missourian, columnist Steven Bender tells about Werner's Market. Here is an excerpt:

When we walk into Werner's Market, we walk into more than just a grocery store. In a way, we walk into the past. We see no ATM machine, no video equipment, no pharmacy, no electronic product scanners. What we do see is a simple grocery store with a smiling clerk, shelves of merchandise and a sense of the way things used to be....

Kenneth (Werner) says in the market's first years, they used to sell flour or sugar in 100-pound sacks. Farmers also used to bring in live chickens to dress and exchange for merchandise. Selling fresh dressed chickens on Fridays or Saturdays gave families a special treat for Sunday dinner. Clerks sold sauerkraut from a barrel by weight.

"Dill pickles used to come in a round barrel," Kenneth says. "If you wanted a pickle, you would just reach down in there with a fork and get one."

He says some customers have ordered for delivery and have never been in the store. Werner's Market offers free delivery within the city limits, provided that the order exceeds $25.

"They call through marine radio," Kenneth says, pointing to photos of boats on the store wall. "And then we deliver to them down here at the river. At Missouri Dry Dock most of the time."

Kenneth Werner of Cape Girardeau has donated the former Werner's CGA Super Market and an accompanying home at 1192 Broadway in Cape Girardeau to the Southeast Missouri State University Foundation.

Werner donated the property in return for establishing a $150,000 gift annuity with the foundation. Proceeds from the annuity, at the time of Werner's death, will benefit athletic scholarships at Southeast Missouri State University.

"We express our sincere thanks to Mr. Werner for his generosity," said Southeast President Kenneth W. Dobbins. "Mr. Werner's gift will immediately benefit our current Southeast students with the expansion of parking at Houck Stadium and our future student athletes who will benefit from athletic scholarships."

Plans call for razing the former Werner's CGA Super Market and the accompanying home in the fall, and converting the site into a landscaped parking area.