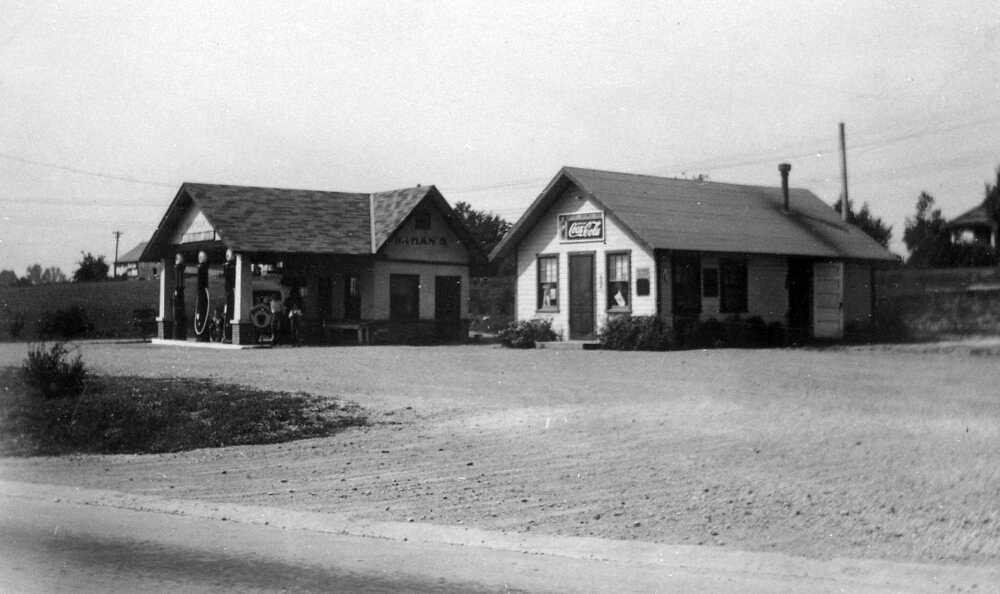 The Haman Service Station is shown in the early 1930s. The building's canopy was removed in 1935. The business was located on the west side of Highway 61 near the West Broadway intersection, slightly north of the Alvarado, which was on the east side. The owners, Albert and Kate Haman, also operated a restaurant next to the service station.

A service station operated by Albert Haman on Highway 61 near the West Broadway intersection, is being remodeled.

A canopy on the station building has been taken off, and a larger dormer is being placed at the middle of the building, on the east side. The station is adjacent to a refreshment establishment operated by Mr. Haman.

Many tons of dirt are being taken from a plot of ground owned by Albert Haman near his gasoline service station on Highway 61 at the west edge of the city to be used in filling a number of places.

A fleet of trucks and men operating them have been busy taking the dirt to the new memorial building, the new E.P. Masters residence on West Broadway and other places where grounds are being built to higher levels.

John Wescoat has purchased lots on the west side of Highway 61 just west of the Broadway junction with the highway from Albert Haman. The property, now occupied by a gasoline filling station and a restaurant, housed in two separate buildings, has a highway frontage of 400 feet and a depth of about 300 feet at the deepest sector. It is triangular in shape. The filling station is being remodeled and the restaurant will be moved farther north to permit a greater area of drive-in space to the filling station. Wescoat, who will operate the place during the summer, said he has contracted with the Marquette Oil Co. to use Texaco products.

The buildings would be demolished and new Sinclair service station would be built on the site in 1954.