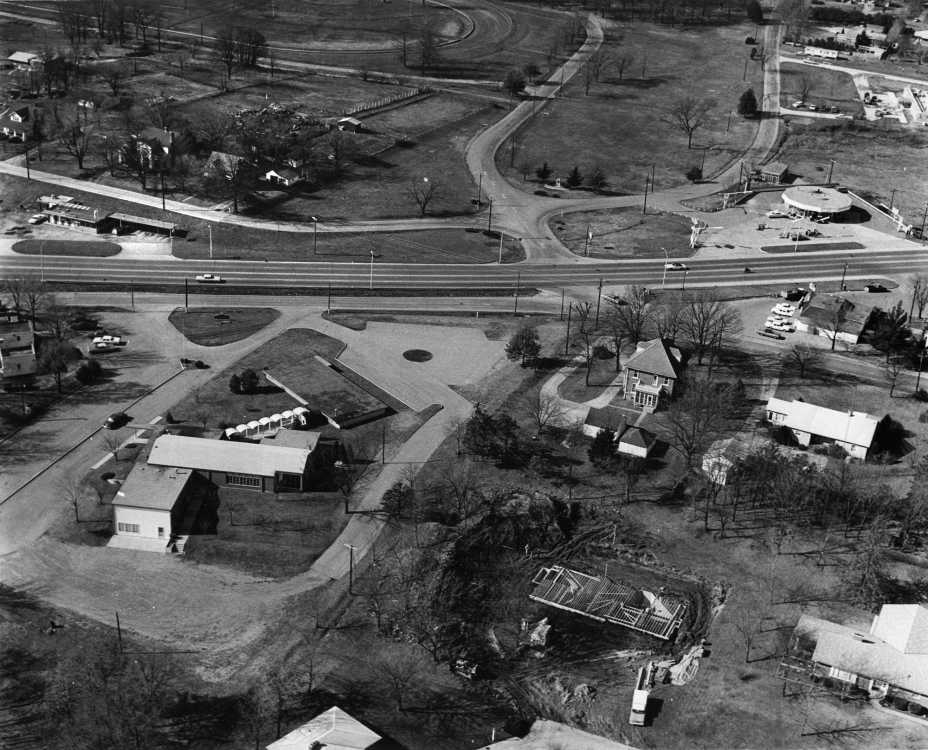 St. Andrew Lutheran Church, foreground left, is shown along Kingsway, east of Highway 61 (Kingshighway) and the entrance to Arena Park in aerial photo taken in 1968. The congregation was formed in 1957.

On a clear sunny October day exactly one year after the congregation had assembled for its first service on the church property at the intersection of Highway 61, Cape Rock Drive and Kingsway, St. Andrew Lutherans dedicated their chapel Sunday afternoon. The chapel and education unit now stand at the exact place where last year a flat bed truck provided the speakers' platform and seats were made of planks for the outdoor service. During this year the congregation has been meeting at Carpenter's Union Hall while the church was being planned with construction last March.

More than 700 members and their guests assembled for the two services Sunday. At the dedication that morning at 10 o'clock the group gathered at the door. There after the ribbon was cut by John L.E. Boardman, architect, Ben Sides, general contractor for the church, handed the keys to Kenneth Bender, chairman of the building committee. The door was opened by Luther Hahs, president of the congregation, who with the elders of the church, Donald Hente, Carl Jank and Alvin Nagel, and Rev. Francis Roschke, pastor, led the congregation into the building. They also carried the sacred books and vessels into the chancel.

Rev. Roschke was the speaker at this service with Rev. Leopold Dippold, emeritus, also a member of the congregation, as the liturgist.

In the afternoon for the service of praise a capacity audience filled the chapel and overflowed into Sunday School rooms where loudspeakers had been installed. More than 700 persons attended both services. Rev. Paul Ph. Spitz of St. Louis, district director of missions, was the guest speaker with Rev. Ralph C. Fessler, pastor of Trinity Lutheran Church and Rev. Roschke as the liturgists. At the close of the service Mr. Hahs welcomed the many guests and introduced Mayor Walter Ford who brought greetings from the city. An open house followed with refreshments served by the women of the church.

Chancel to Be Added

Groundbreaking ceremonies for the chapel-educational unit were held on March 2 of this year and the cornerstone laying followed on Aug. 10. The chapel will also be used as an assembly room for other congregational activities. In addition to this room the building also contains a kitchen, mothers' room, eight Sunday School rooms and a pastor's study. It is planned that within several years a larger chancel will be added to the front of the building and at that time the chapel will be converted to permanent use as multi-purpose room.

The current worship center was completed in 1971.