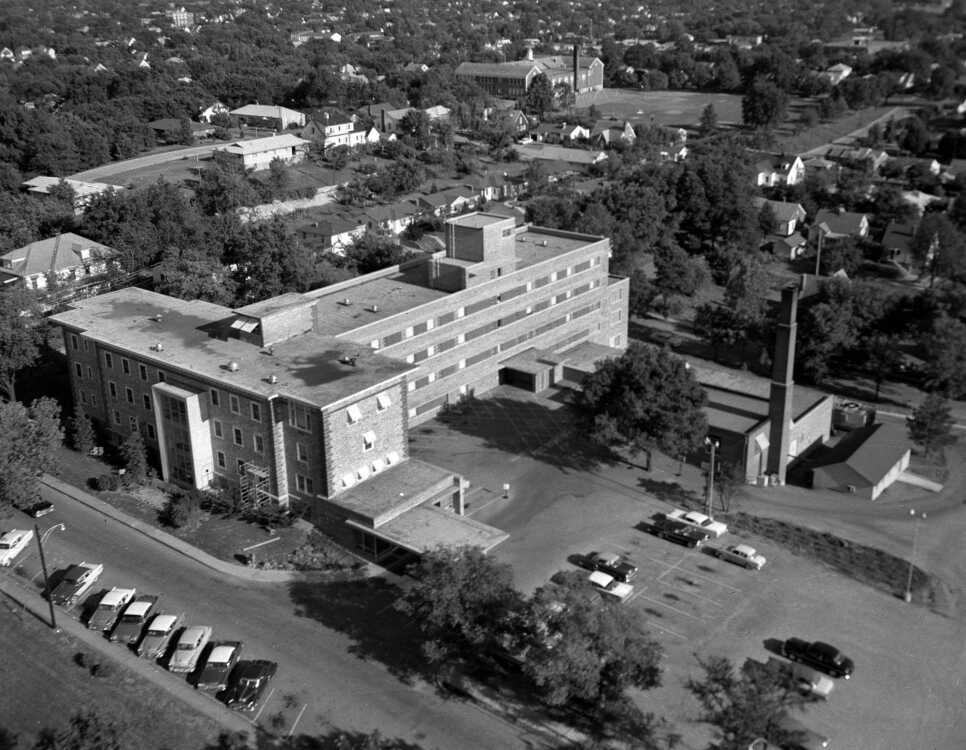 This aerial photo by G.D. Fronabarger shows the first addition built in 1957 at Southeast Missouri Hospital in Cape Girardeau. The addition doubled the hospital's number of beds to more than 150.

The hospital first opened its doors to the public on Jan. 9, 1928. A story on its 75th anniversary in the Southeast Missourian details its history:

The idea of a non-denominational, community hospital was promoted as early as 1923. By the next year, the idea had blossomed into a hospital committee. The committee searched for a hospital site and turned its attention to property overlooking Fairground Park, where the fall agricultural expo was held each year.

That was the westernmost fringe of the city limits, and the direction the city would grow, the committee members believed. Growth would be pushed along by the creation of a new public school in that area that was to be built two years later called Franklin School.

(The school can be seen in the top of the photo.)

About 20 doctors and businessmen signed promissory notes to acquire a 52-acre tract of land that overlooked what is now Capaha Park for $8,250. Later, they bought a nearby 5-acre tract where the hospital would be located. Before then, only about 12 houses were west of Broadway and Louisiana streets.

The group decided to form a subdivision, sell the lots and use the proceeds to pay off the balance of the purchase price and use the rest to build the hospital.

The new addition to Southeast Missouri Hospital was in full use for the first time on Friday when patients in the maternity section of the original building were moved into the maternity rooms in the new structure.

This move completed a transfer of patients to the new structure that has been underway for two weeks. All units of the addition are now in use.

Herbert S. Wright, hospital administrator, said the fourth floor of the existing building, the previous maternity area, will be used to care for patient overflow from the new building.

The other three floors are to be remodeled. Work has started on remodeling of the first or ground floor of the present building where the new hospital entrance will be located. Present office facilities will be moved next week into the unfinished administrative area on the first floor, Mr. Wright reported.

Much of the work will be to enlarge the cramped nurses stations on each floor of the original building. Utility rooms will be constructed on each and two toilet rooms for patients and visitors will be built on each.

Wards will be converted into two-bed rooms and the sun porches will be changed into three-bed wards, Mr. Wright said.

Southeast Missouri Hospital is seen in 1957 from Capaha Park in this blog about the bandshell: