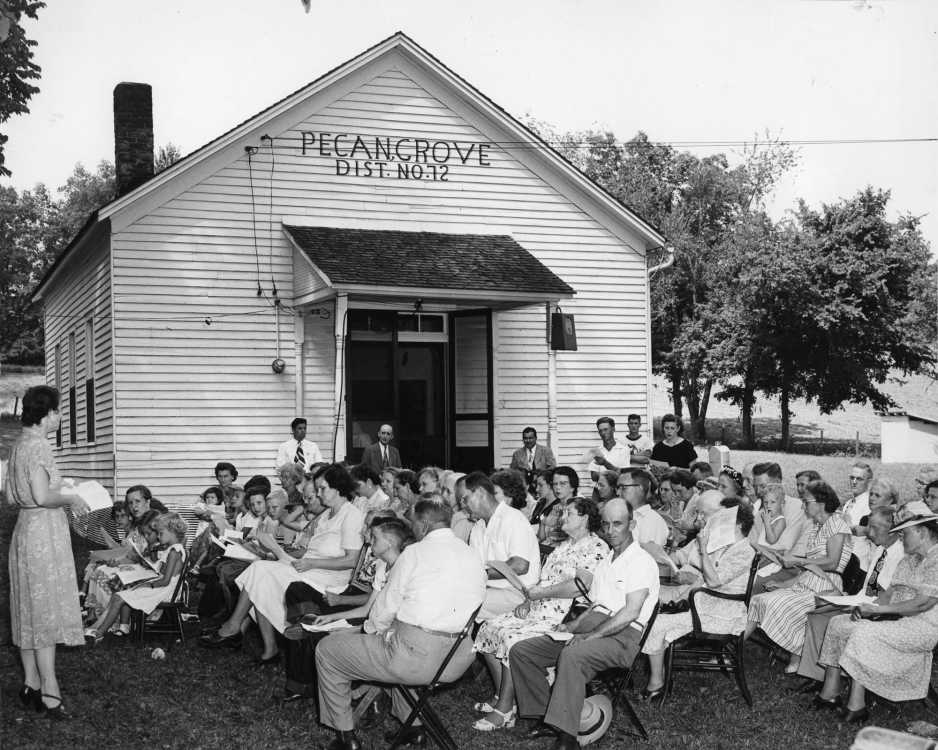 Pecan Grove School continued until 1970 when the district requested annexation by the Cape Girardeau school system. The students were then bussed to Jefferson School in Cape Girardeau.

Nine of the century-old pecan trees from which Pecan Grove School got its name were uprooted by a severe windstorm May 30, 1976.

Celebrating its 50th anniversary, the Pecan Grove School, located on Highway 74 one mile east of Dutchtown, will present an all-day program of entertainment, speeches and refreshments Sunday. The celebration will begin in the morning with a general social hour.

A basket dinner will be held at noon, the program following at 2 p.m. Introductions of teachers at the school since its founding in 1901 will open the ceremonies. County superintendents, clerks, and other officers also will be introduced. Rush H. Limbaugh Jr. will speak on the history of the school and its relation to the area.

The rural school serving District No. 74, has operated in the same building since its founding. Enrollment now averages 16 pupils, while in the early part of the century, as many as 60 were crowded into the 30 by 30 foot building. Grades one through eight are taught in the single-room structure. The one acre grounds provide space for swings, slides, basketball goals and other play equipment.

The present teacher at the school is Mrs. Martha Stickler, who has taught there since 1945. The board members now are Albert Siemers, chairman; Ferd Peetz, Dayton Riehn and Leo Amelunke, clerk.

The next day, a Southeast Missourian story noted Otto E. Eggimann, the oldest living teacher of the school, talked briefly on "old times." Mr. Eggimann named the structure Pecan Grove over the previous title of "the Little Yellow Schoolhouse."