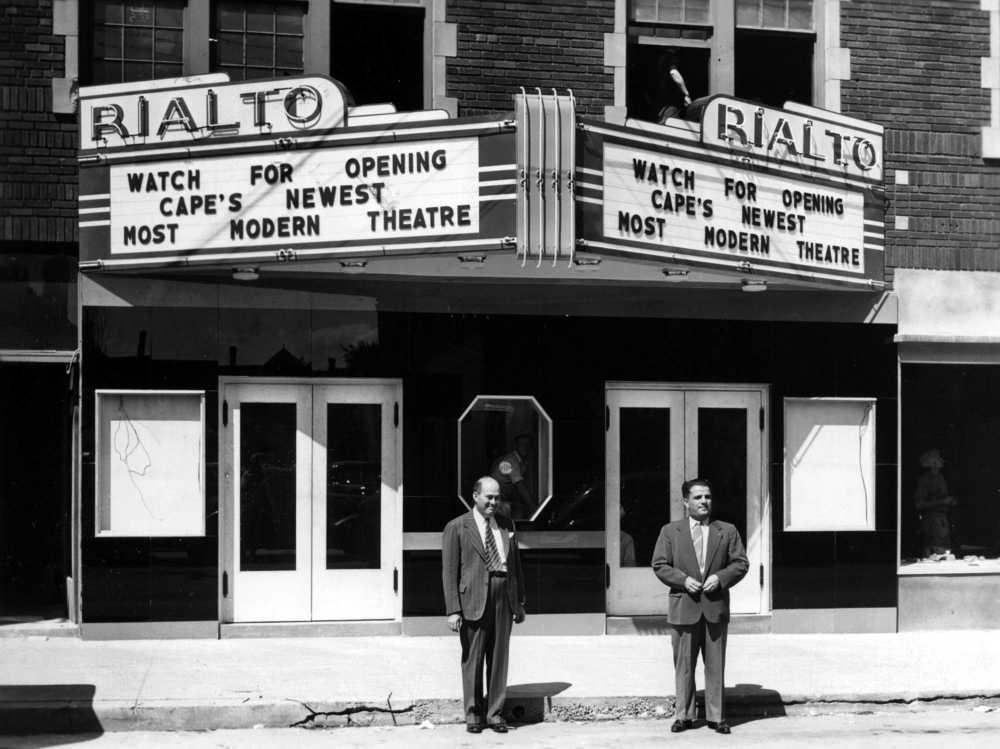 Victor L. Klarsfeld, left, and Edward J. Rosecan stood in front of Cape Girardeau's newest theater, the Rialto, at 420 Broadway in 1940. The two were owners of the Rialto, and Klarsfeld was its manager. (G.D. Fronabarger photo)

Cape Girardeau's new theater, the Rialto, will be formally presented to the public Wednesday afternoon at 1:30 o'clock when it opens with the feature picture "That's Right, You're Wrong," starring Kay Kyser and his orchestra, Adolph Menjou and other screen celebrities. The feature showing will be continuous from 2 p.m.

Located at 420 Broadway, the new theater was constructed and equipped under the management of the Shirley Theaters, in which Victor L. Klarsfeld, the local theater manager, and Edward J. Rosecan of Hannibal, are associated.

During the week days the Rialto will open its box office at 6:30 p.m., with shows starting at 7 o'clock., and on Saturdays and Sundays shows will run continuously from 2 o'clock in the afternoon, manager Klarsfeld said.

One large floor, with 558 seats, provides the theater auditorium. There is no balcony. Simple, but quite attractive in design, the new show house presents the latest in modern accommodations for public comfort, with upholstered seats, all slanting towards the screen, making it fully visible from any part of the house. The floor, styled to conform with the newest theater engineering, slants forward toward the screen, then lifts near the stage.

Modernistic lighting effects have been employed, the aisles are heavily carpeted and color schemes used in the decorations are employed in subdued measure to give a sort of restful appearance. The lobby, large enough to accommodate quite a crowd, is equipped with indirect lighting. On its either side are offices. The front is inlaid with black structural glass, a V-type marquee overhanging the sidewalk. The box office, set at the sidewalk's edge, has an octagon-shaped glass trimmed with stainless steel. Blue is the predominant color of the lobby.

The latest washed air system has been secured from the American Blower Corp. and has been installed. The system changes the air in the entire building every two minutes, winter and summer.

An emergency exit has been installed in the rear of the building and the lobby is fronted with two entrances located on either side of the box office. Throughout the interior the finishing is of variegated plywood, with paneled sides, rising above a rustic base. A proscenium arch leads to the screen in the north end of the building. The screen is specially built by the Walker Day-Lite Screen Mfg. Co., being unusually porous to permit, without obstruction, the passage of sound.

Other equipment of the theater includes convenient rest rooms in the foyer to the right of the auditorium. A candy and popcorn concession is on the left side of the foyer. Three modernistic poster displays adorn the lobby.

The sound equipment in the projection room, located over the lobby, is of the latest and modern type, making use of a two-way speaker system, featuring late type speakers. The entire amplifying equipment is in duplicate so as to render an interruption virtually impossible. One of its outstanding features is that sound is evenly distributed throughout the auditorium, making it possible for uniform hearing in any place in the building.

The theater was built by the Gerhardt Construction Co. of Cape Girardeau, under supervision of J.W. Gerhardt, with Burton Gerhardt assisting as foreman.

Manager Klarsfeld had been in the motion picture business for the past 10 years, having worked in the sales departments of film exchanges, and having operated motion picture theaters in St. Louis and Illinois. He and Mrs. Klarsfeld moved to Cape Girardeau from St. Louis in July.

Mr. Rosecan, who will assist in the operation of the Rialto, has been connected with the motion picture industry for 22 years. He has been with the sales departments of several large film distributing firms, is a former manager of the St. Louis Exchange of United Artists Pictures, and is also affiliated with his brother in the operation of the Princess Theater in St. Louis. 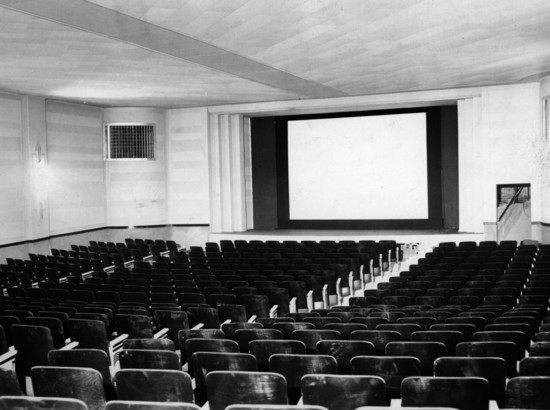 Above is the view of the main auditorium of the Rialto in 1940. 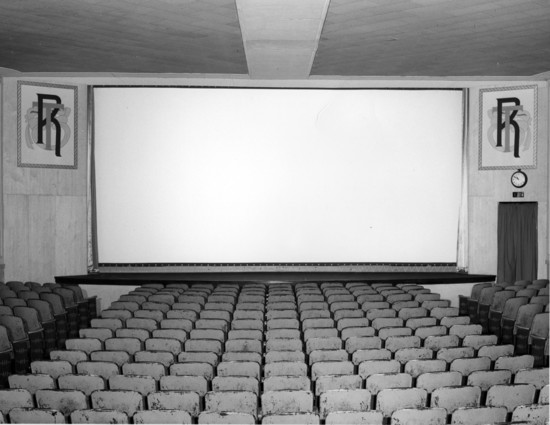 Above is the Rialto Theater circa 1959.